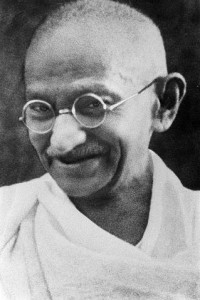 (UPDATE October 25, 2015: This article was first published in January 1998. Since “CompassionateSpirit.com” was started in September 2001, the article has been on the website as a static page, and is now being converted to a blog entry.)

“Spiritual progress does demand at some stage that we should cease to kill our fellow creatures for the satisfaction of our bodily wants.” — Mahatma Gandhi

This month marks the 50th anniversary of the violent death of the apostle of nonviolence: on January 30, 1948, Mahatma Gandhi was assassinated in India. Many throughout the world admire Gandhi and want to work for peace. Few of these admirers, however, have really understand Gandhi’s own words about what peace requires: a commitment to nonviolence which includes both animals and humans.

Part of the reason for the “invisibility” of Gandhi’s vegetarianism is that so many in India are vegetarian anyway. However, Gandhi was vegetarian as part of a conscious ethical choice, not just adherence to Indian culture, as he makes clear in his Autobiography. Gandhi actually experimented with meat-eating in his youth, then gave up meat consumption just to please his mother. Later, in England as a young student, he read a pamphlet by Henry Salt entitled “A Plea for Vegetarianism” which completely convinced him. “From that day forward,” Gandhi says in his Autobiography, “I may claim to have become a vegetarian by choice” — and the spread of vegetarianism “henceforward became my mission.”

Gandhi had a straightforward concern for animals. Nonviolence includes nonviolence towards animals–the devotee of ahimsa (or nonviolence) “shuns to the best of his ability the destruction of the tiniest creature.” He was a lacto-vegetarian, consuming goat’s milk, but resolutely avoided meat. When Gandhi spoke to the Vegetarian Society in England in 1931, he said that he would never eat meat even in the face of death: “If anybody said that I should die if I did not take beef-tea or mutton, even under medical advice, I would prefer death.” Gandhi viewed moral commitment as essential to the vegetarian cause. He observed that those who became vegetarian solely for health reasons often had great difficulty in remaining vegetarians, while those who were vegetarian for ethical reasons were much more consistent in their practice.

There is a second aspect to Gandhi’s vegetarianism, and that is Gandhi’s radical economic views. For Gandhi, violence is inherent in any form of exploitation or inequality. “If we are to be nonviolent,” he said, “we must then not wish for anything on this earth which even the meanest or the lowest of human beings cannot have.” Gandhi lived a very simple lifestyle, insisting on sharing in manual labor and at his death had only a very few possessions.

This has obvious implications for anyone eating a typical American-style diet. There is no way that all humans could ever be “raised” to such a destructive standard of living. The earth’s resources cannot sustain even the meat-eating of a small, privileged minority; it certainly cannot sustain such a massive waste of resources by all humans, were everyone to eat even half the meat of the average American.

It has been said that vegetarianism alone cannot solve the world’s problems; even if the world were to become entirely vegetarian tomorrow, other problems remain (overpopulation, overconsumption, etc.) which might even worsen the problem of world hunger. There is some truth in this. For everyone to become vegetarian overnight, would be the ecological equivalent of winning the lottery; it would release vast resources of land, water and energy. But just as real-life lottery winners sometimes actually wind up in debt due to mismanagement of their resources, so the human race, if it fails to act in accordance with Gandhi’s universalism, might still wind up with more environmental problems than before. We need to focus on regulating all of our actions on the principle of global equality, as well as our actions with regard to food.

Gandhi warned against abrasive relationships with meat-eaters. Vegetarians need to be tolerant of others if they want to convert them to vegetarianism. However, we should certainly not remain silent about vegetarianism. “Truth hates secrecy . . . there must be no watering down of the ideal. . . . A Satyagrahi [practitioner of truth-force] has no secrets to keep from his opponent or so-called enemy.”

None of this has support in Gandhi’s thought. Quite the contrary: for Gandhi both vegetarianism — and speaking out about vegetarianism — is a moral necessity. While we should adopt humility and tolerance in our relations with meat-eaters, we as vegetarians are not just allowed, but required, to voice our ideals. Truth-force requires nothing less.