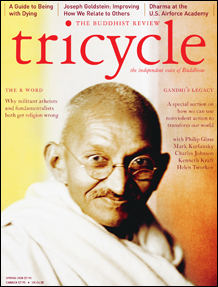 [The Spring 2008 issue of Tricycle, the “independent voice of Buddhism,” published the following letter to the editor from Kate Lawrence]

I was glad to see “Gifts That Keep Giving,” encouraging readers to give gifts through compassionate charities, but shocked to see that Heifer International was included in the list.

As Buddhists, a donation through Heifer violates the First Precept about not killing. These animals and their offspring will be killed, and killed specifically at the request of the donor. Do we really want to celebrate the holidays by sending animals to slaughter? Even if the donated animal is kept for milk or egg production, there is still killing involved: the female animals’ unwanted male siblings have most likely been slaughtered sooner rather than later.

Buddha’s teaching considers animals to be sentient beings, yet to Heifer, Oxfam, and similar organizations they are simply commodities to be used. For example, rabbits are described in a Heifer brochure as “a great source of protein” instead of being recognized as intelligent beings worthy of respect. (I live with three house rabbits, so I’ve been able to observe firsthand what complex creatures they are.)

Secondly, farming animals is an inefficient, expensive, and environmentally destructive way of producing food. Non-native livestock are being introduced to fragile habitats, where grazing destroys the fertility of the land, and reduces the amount of farmland available to local people. Maneka Gandhi, former Indian minister for social welfare and animal protection, comments, “It is madness to send goats, cows, and chickens to areas where they will add to the problems of drought and desertification . . . Within two years the people who get goats have an even poorer lifestyle.” In addition, many recipients of gift animals are unable to feed them to maturity, much less feed and raise offspring.

We need to turn away from bloodshed and environmental degradation and spend our charitable dollars on more compassionate hunger relief. Give fruit trees (treesforlife.org) or training in soybean production (plenty.org) instead, or donate groceries to a local food bank.

Note: Tricycle published a response from Heifer International which denied that their animals hurt the environment, were raised inhumanely, or were killed needlessly, but did not contest the point that contributing to their cause was a violation of the First Precept of Buddhism.