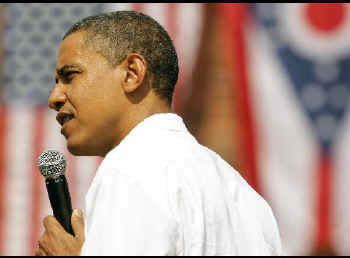 (UPDATE July 18, 2020: This article was first published in November 2008 and was for some years on the website as a static page, but later dropped. I have now converted it into a blog entry. Some of my ideas at that time, such as that an economic collapse would start during his term of office, obviously are not true. But I am re-posting it so that people will know what I have been thinking about over the years.)

Everyone’s got their memo to the new President. Here is mine.

All of the critical problems that the country faces come down to a single problem, the environmental crisis. Environmentalists have warned for decades that our industrial economy based on indefinite growth could not go on forever. Now it is we, not our children or grandchildren, who must face the crisis. There are three immediate manifestations of this problem: (1) global warming, (2) depletion of oil supplies, (3) the rise of new epidemic diseases.

Of these, only global warming is getting any attention, for which I am grateful. Quick action is needed here and I hope that it will not be long in coming. But neither you, nor any other prominent political leader, not even from the minor parties, has drawn any significant attention to the problem of oil depletion or epidemic diseases. All of the political issues that you face — health care costs spiraling out of sight, the biggest financial crisis in a century, and seemingly endless war and conflict in the Middle East — are at the bottom just manifestations of a deeper environmental crisis.

The biggest single economic problem the country faces is not global warming, but the problem of depletion of oil supplies, or “peak oil.” This is something that you will face in the next four years. The exact date of the peak is unimportant, but production has been essentially flat since 2005, despite record high oil prices to encourage production. The inability of oil supplies to keep up with demand was the underlying cause of the current economic recession or depression. The rise in oil prices sent a price shock that precipitated the recession. This price shock exposed the foolish loans that were made with the thought that the economy would continue to expand forever, an expectation which obviously cannot materialize.

The problem with peak oil is three-fold: (a) this crisis will hit sooner, faster, and harder than global warming — you, not your successors, will need to deal with it; (2) the most obvious “solutions” to the peak oil problem (coal-to-liquids, gas-to-liquids, tar sands) make global warming worse; (3) if the economy collapses because of peak oil, it will make it more difficult to cope with all the other problems we have, such as building up the renewable energy infrastructure.

The rise of new epidemic diseases such as AIDS, mad cow disease, and avian flu, and the resurgence of antibiotic-resistant “traditional” infectious diseases even in the United States, creates a clear and present danger to the country and the world. The H5N1 virus, if and when it mutates to an infectious strain, would devastate the world in a way unknown since the Black Death of the 14th century. Surely this is a greater threat than all the terrorists in the world. These diseases are all related to “factory farms” and the crowding together of livestock animals in a way that spreads these diseases and facilitates mutations. The more traditional “diseases of civilization” such as heart disease, cancer, diabetes, obesity, etc., are also related to livestock production, which are already having a tremendous impact on medical costs.

Most of our other social problems go back to these underlying environmental problems. Because everyone thinks our economy will expand forever, we have overheated the planet with fossil fuels, made foolish loans with the expectation that housing prices would rise indefinitely, attacked Iraq in order to secure oil supplies, and crammed animals together in factory farms to provide cheap meat.
Three Priorities

I would suggest three priorities for your administration. Your administration needs as its top priority to get good scientific information on these subjects yourself and present it to the American people. We cannot afford to politicize science, as happened for the last 20 years with global warming: we do not have 20 years to deal with them.

And the problems of global warming, peak oil, and infectious disease are only the most urgent of the many environmental problems we face. We also face soil erosion, water pollution, deforestation, “peak natural gas,” “peak coal,” species extinctions, and so forth, all of which will eventually lead to a decline in the total human population and economy.

The second priority is to bring the United States to terms with the fact that its material standard of living will in fact decline. This decline will likely begin during your term of office, if it has not already started. You may be able to delay this period or the recognition of this period for a while, possibly for as long as your entire term, but this problem needs to be faced somehow. Delay can only increase the magnitude of the disaster, which will be something felt during our lifetimes and will likely start during the next four years.

Your third priority should be to advance the country towards a steady-state economy, not one based on continual growth and exploitation. Our quality of life is not a product of our material possessions. This has a firm basis in our religious traditions. Jesus, at every opportunity, pointed out that life was more than riches, and the early Christians shared all their possessions. Other spiritual traditions have similar teachings. We need to accept that we have been consuming way too much, that this hasn’t been making us happy anyway, and that this way of life will end — either because we decide to end it, or because of physical limits. “Stimulating economic growth” is not a solution; it is in fact the underlying problem. We need to get used to living with fewer physical goods, not just as a way to muddle through the current problems, but as a way of life.

These environmental crises — the first fruits of our overconsumption and overpopulation of the earth — present serious problems, but also opportunity. It is an opportunity because there are so many other natural resources which we have not exhausted, and we still have left all the plants and animals which we have not yet wiped off the face of the earth. We can turn from a growth-oriented economy to a steady-state economy in which progress is measured by how much we give back to the earth, rather than how much we take from it.
Some Specific Actions

As to specific actions, I would first point out that politics is not my field of specialty. You are the President-elect and I am no more than a private citizen. I could throw out some ideas, but I do not know how to bring any of this about, except by educating the public in my own way.

At a strategic level, I would suggest laying out absolutely the most essential elements of our environmental crisis in your state of the union address, if not in your inaugural address. I would suggest that you lay down the principle that the environment must have absolute priority, since it is the basis for our economy and our nation, and indeed all life on earth. Everything else — national pride, political advantage, or ideological belief — must in the end be swept aside. Then lay out in an objective way as many of these specific problems as you dare. If you cannot reduce most of your audience to tears, you have probably not gone far enough.

On a more tactical level, I could suggest these measures, or similar ones:

The political problem that we face is to balance two objectives: (1) not to alarm the public so much that the country and the economy collapses into chaos, but also (2) to turn away from “business as usual” before this pushes the economy and the country into financial collapse anyway because of oil depletion. This collapse could very well occur, and will probably start, during your term of office. I do not know if such a balance is possible.
A New National Anthem

Here’s a final suggestion: we need a new national anthem. I have a specific tune; it is the tune known as “Chester” composed by William Billings in 1770. This is a stirring song, not difficult to sing, which actually was the unofficial “national anthem” during the American Revolution. It was written by an American, rather than being an English drinking song. There are a number of patriotic lyrics, and we might sponsor a competition to find the right words — I’m concerned about the tune, not the words. The following lyrics, by Philip Doddridge, are found The Sacred Harp 1991 edition. Even though religious in nature, they convey our identity with and dependence on nature. 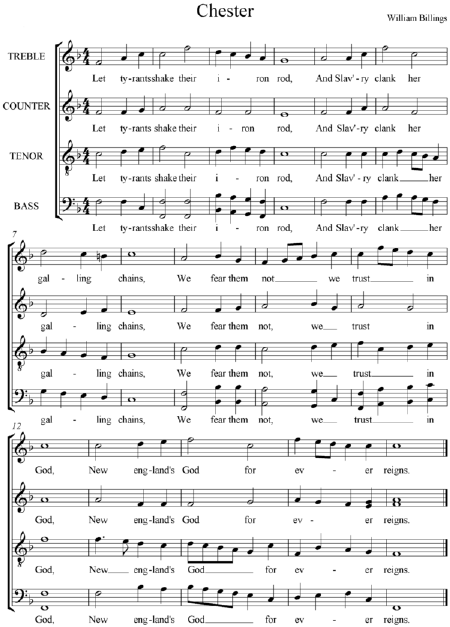 Let the high heavens your songs invite,
These spacious fields of brilliant light;
Where sun and moon and planets roll,
And stars that glow from pole to pole.

Sun, moon and stars convey Thy praise,
Round the whole earth and never stand;
So when Thy truth began its race,
It touched and glanced on every hand.

(Note: the melody is in the “Tenor” part so for a traditional SATB choir, you would switch the “treble” and “tenor” parts.)

Good luck and let me know in the unlikely event that I can be of further assistance.