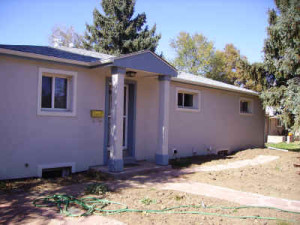 Heating of buildings is a significant chunk of the nation’s energy consumption, and many buildings are quite wasteful. This has huge consequences for climate change and resource depletion, and decisions about buildings have consequences that last decades.

So, in the summer of 2007 we decided to superinsulate our house. In 2009 we took further action to reduce heating consumption, installing a tankless hot water heater and further sealing the house. This post is a visual depiction of what happened.

The process was quite expensive; it’s substantially more than just, say, replacing all the windows or blowing insulation into the roof (which we had already done). But the results were significant; it cut our space heating consumption to about 45% of the previous value. We hired a contractor to do the work, who did a great job.

If we had it to do over again, we would have talked to the people at the Passive House Institute (USA) first, and consider building a house from scratch, as Lance Wright has done. We hadn’t even heard about the passive house concept, despite doing quite a bit of research and asking a lot of “insulation specialists” for advice. However, scraping the house and rebuilding it to passive house specifications would have been several times as expensive as this already rather expensive project. If you’re thinking about building a house from scratch anyway, though, I would definitely recommend going with the passive house idea.

Here is a visual depiction of what happened. 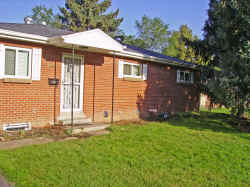 The front of our house — “before”. The walls were single brick, then concrete blocks, and then drywall. We had hoped there would be a space between the drywall and the brick into which we might have blown insulation, but this was not the case; there was only concrete block.

Here are the steps we took to make our exterior insulated retrofit.

1. We replaced the bathroom window.  This was the only window which we hadn’t replaced, it was a single-paned window with metal casing.  We got the latest, greatest, R-9 glass for the window, which was probably more insulation value than was in our walls. 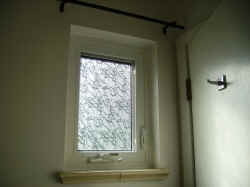 We were both delighted and chagrined to find out about the R-9 glass.  We had previously replaced all our other windows (over many years) with standard double-paned low-E glass, which is probably about R-4 (not that bad compared with what we had before).  The R-9 glass has some special gas in between the panes (I’ve forgotten what). If we had known this at the time, we might have had all our windows brought up to R-9, but we couldn’t justify the additional cost at this stage to do them again.

Some years later, though, after talking with Lance Wright, we found another alternative which would have been even better for most of the windows in the house: simply installing a second standard double-paned glass window over the first.  This essentially creates quadruple-paned glass, and further insulation value if you leave about an inch between the outer double-paned window and the inner double-paned window. This relies just on standard building technology instead of the special gas used for the R-9 windows, and has the same or even greater net effect. The best time to have done this would have been at this stage, before we started installing all the insulation described below.

2. We got a heat-recovery ventilator.  Because our house was going to be sealed only slightly tighter than Fort Knox, we wanted to be able to get fresh air.  Such an air exchanger means you will lose a marginal amount of heat, but not quite as much as you would lose by just cracking the window to get fresh air. 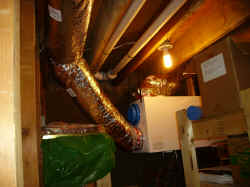 The Heat Recovery ventilator, seen from the basement

3. Dig out the area around the house to put in below-grade insulation.  We put in 2″ thick polyisocyanurate all around the edge of the house, below the ground level down about 4 feet. 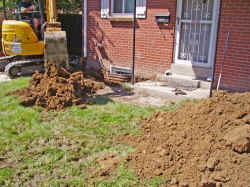 Excavating around the house 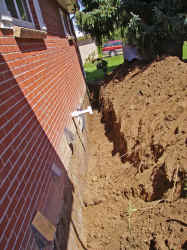 Just before putting in the polyiso. 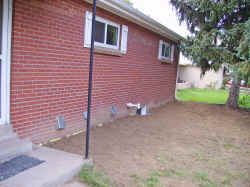 4. Horizontal boards 2.5″ thick were put all around the side of the house (to support the polyiso insulation). 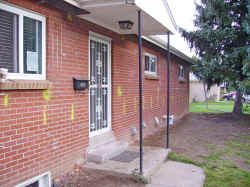 Step 1, put bolts in the side of the house 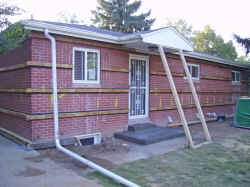 Step 2, put up boards.  Note also we decided at this point to repour the front porch steps and replace the supporting poles (not part of the insulation per se). 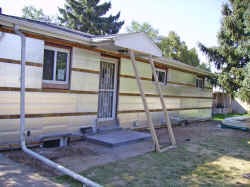 After putting in the horizontal polyiso sheets 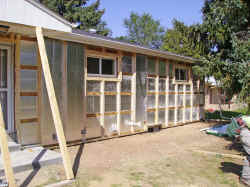 Vertical boards are put in to support vertical polyiso sheets 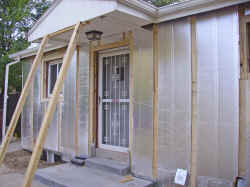 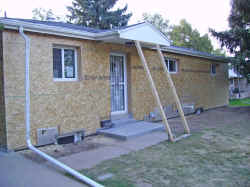 After plywood sheathing is added

9. Flashing is added around doors and windows.  I am told that you really need to do this step right so that moisture does not get in behind the exterior and rot what you have added from the inside.  Also, we added new supporting posts or pillars for the front porch that were thicker and more aesthetically pleasing than the old slender poles would have been. 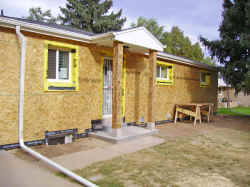 Notice, also, that the exterior insulation does not come all the way down to the ground.  You can’t really tell from the street, but there is about 1/2 inch between the ground and the bottom of the new insulation.  This is because of a Denver building code regulation and is required to insure proper drainage.  You lose a small bit of insulating value this way, though this effect is probably quite small.

10. Add Jumbo-Tex and wire mesh in preparation for the stucco.  We decided to do stucco rather than vinyl, which was slightly more expensive, but gave us the look we wanted.  Actually, we would have really preferred the original brick, but to add brick to the outside — even the “thin brick” now being advertised — would have added about $10,000 to the project.  This project was already quite expensive and we didn’t want to make it any more so. 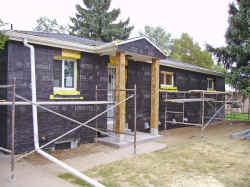 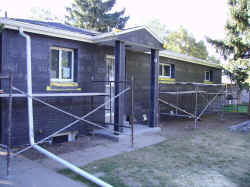 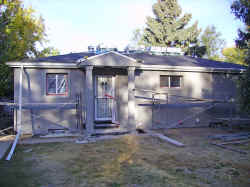 12. Added the color to the stucco.  We chose an off-white for the base color, snow white for the trim, and blue for the accent around the doors (and also the fascia). 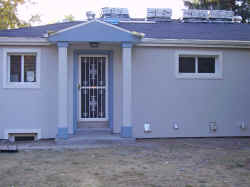 13. Replaced the roof.  This wasn’t part of the insulation process, but we discovered that our roof needed replacing in the course of the project — we also completely replaced the gutters as well. 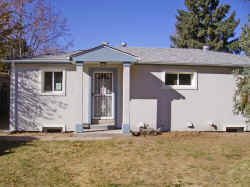 14. We also got solar power at about the same time, and this gives a view from the rear of the house. 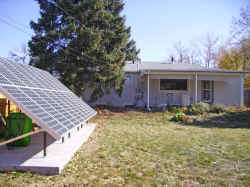 Solar power and back yard 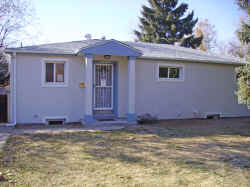 With all items re-attached to exterior

Much of this work is “cosmetic” type work and not immediately relevant to insulation, but obviously necessary if you’re going to completely rebuild the exterior of the house.

This cut the heating consumption to less than 45% of the previous levels (without changing the thermostat settings). If we had updated the windows as well, we would have probably done even better, perhaps 40% or less. What we did was not necessarily the best, but we are pleased with the end results. Two unexpected pluses of what we did: (1) the house is considerably more comfortable during the winter, even keeping the thermostat at the same level, and (2) because the heater doesn’t come on as much, the air doesn’t get nearly as dry (since constant heating dries out the air). Think carefully about the future of energy and the planet before you make any housing or insulation decision.