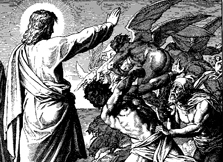 Jesus drives out the demons

1. You must be repent and be baptized; that drives out the demons.

2. You must not eat meat, especially meat sacrificed to idols (Homilies 7.4, 7.8). Engaging in acts of violence (such as eating animals killed for their meat) allows — indeed, invites — the demon into your life.

3. Most interestingly, Peter urges us not to eat with those who are themselves possessed by demons (Recognitions 1.19, 2.3, 2.71-72, 7.29, 7.34; Homilies 1.22, 13.4), regardless of what you eat or even what is actually on the table. If you, even though vegetarian, eat with someone who is themselves possessed by a demon, then the demon is present at the table, regardless of what you are eating.

If we were to apply this Ebionite rule literally today, it would be tremendously socially isolating. Practically everyone eats meat, so you are writing off eating with most of the population. Moreover, it’s just not plausible to me that there are supernatural creatures whom God allows to take over the bodies and minds of those who participate in violence. Finally, I find it difficult to believe that baptism would “cure” you of this sort of demon possession.

Nevertheless, there is more logic in the Ebionite position than meets the eye. Meat-eaters may not be possessed by supernatural creatures, but they are possessed by something. Call it “cognitive dissonance” or whatever you want, but I notice that meat-eaters are peculiarly blind to the effects of meat-eating. Obviously, meat-eating kills animals, and even if you can stomach that, these days it is well known that animals do not live easy lives or die easy deaths.

Now, you may happen to believe that eating meat is necessary for health reasons, or that there is such a thing as “happy meat.” But most meat-eaters don’t take it even this far; they just aren’t thinking at all. It’s being blocked out of their brains.

We can and should answer arguments for meat-eating, such as those made by Michael Pollan and Lierre Keith. But we’ve been doing that for decades with little effect. It is not just a lack of information or a failure of logic that’s going on here in the mind of meat-eaters. It is a deeper problem, a psychological problem, something is turning off their ability to look at reality in a straightforward way. It’s as if they were possessed by demons.

So should we eat with meat-eaters or not?

For an ethical vegetarian, eating at a table with meat on it is itself a disturbing event. You go back to visit your family and there is the Thanksgiving turkey, but you put up with it because it’s the only way you’ll get to see them. Some vegetarians, of course, have to do it every day, as their spouses are meat-eaters. Love is a powerful thing, “love is as strong as death” (Song of Solomon 8:6), and I think that you can get used to it.

Something happens within you when you believe in vegetarianism but are constantly faced with this sort of violence. There is constant temptation thrust in your face by media and fast food outlets, and by the actions of those around you.

It could make you crazy, and sometimes it does.

This either desensitizes you to the issue, so that you force yourself (for the sake of politeness) to ignore what is going on in front of you, or it provokes you to say or do something which you will later regret. Most vegetarians learn quickly that this latter response is not helpful. They either desensitize themselves to the issue, or — as Peter suggests — avoid the situation altogether.  Or, they may react in ostensibly crazy ways, such as by throwing pies or taking off their clothes in public.

There are three things to avoid (in increasing order of importance): eating with meat-eaters, eating at a table with meat on it, and actually eating meat. If you can’t avoid eating with meat-eaters because (e. g.) they’re your relatives, then you need to stop afterwards and re-affirm your commitment to vegetarianism. Perhaps this is why the Ebionites also believed in daily baptism. They recognized that in a world full of blatant evil, avoiding all contact with demons is impossible.

When we constantly engage the demons, we need to renew and purify ourselves after each encounter.  What form could such renewal take?  That’s a good question and I don’t have a good answer.  Daily baptism is one sort of ritual, but there’s no community (certainly not of vegetarians) of which I am aware that is practicing this.  The underlying need, whether it’s filled by daily baptism or anything else, is to become and remain mindful of what we are doing and the hurtful activities which are going on around us — without letting them control us.

1 thought on “Eating at the Table of Demons”