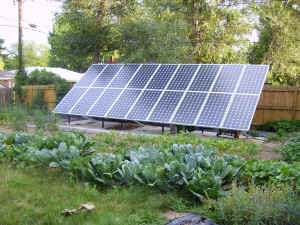 Peak oil — the maximum point of oil production — is of tremendous importance to the future of vegetarianism. A lot of vegetarians, though, have not even heard of peak oil, and it is hard to explain it to them. Why is this, and what can we do about it?

There are two basic reasons for this difficulty, which are the same for vegetarians as nonvegetarians. The first is that it goes against everything in our experience. The second is that very few people have heard of it.

This isn’t just about oil, it is about the limits to growth. For the entire lifetime of everyone now alive, oil production has been growing and the economy has been growing along with it. Oil powers our cars, our economy, and our civilization. But oil is just the first in a long line of natural resources which are now in diminishing supply — close behind are coal, natural gas, topsoil, water, forests, and many minerals.

Everyone knows that oil is finite. It was formed millions of years ago and there isn’t any more. But most people imagine that the day of reckoning is sometime comfortably in the future. Surprise: peak oil is for all practical purposes here today. According to the International Energy Agency, conventional oil production reached a peak in 2006, although the U. S. Energy Information Agency still puts the maximum year at 2005. It’s still possible that these peaks might be exceeded, but not by much and not for long.

There are substitutes, but they involve major social transformations. Coal-to-oil technology, renewable electricity from solar and wind, nuclear power, electric cars, and so forth all involve massive infrastructure investments which will take decades to implement, and we do not have decades before peak oil hits. If we had acted on this problem in the 1980’s, as President Carter advocated, we might have had a chance — but not now. Our economic system is highly leveraged towards a future of economic growth; we are awash in debt. Because of this, the limits to growth don’t merely imply that our system must slow down, but that it will likely collapse.

One way to explain this to vegetarians is talk about the part of the “limits to growth” picture connected to agriculture. In a world of limits, a vegetarian diet makes a lot of sense. There is only so much topsoil and there is only so much water. It can take 5, 10, or even 100 times the land, water, or energy to grow crops for people than to create the same number of calories from meat, the exact quantity depending on what crop you’re talking about and what natural resource is involved.

Without cheap energy for irrigation and artificial fertilizers, food becomes much more expensive. Rises in oil prices are directly correlated with rises in food prices. The oil shocks of the 1970’s and the oil price spike of 2008 caused record high food prices. In 2011 we have already seen unrest and violence over food issues: first in the riots in Algeria, then in Tunisia, where the government has fallen, and again in Jordan, where in an unprecedented development for that country, thousands of demonstrators have protested against food prices and unemployment.

We might be able, through drastic measures, to continue feeding a small and dwindling minority of privileged citizens a meat-centered diet — but why? And what are the social and political implications of protecting a privileged meat-eating minority in this way? Obviously the entire world can’t all drive cars or live in McMansions. If you get this basic point, then you’re ahead of most of the population and our political leaders. But this same logic means that the entire planet needs to move in the direction of plant-based diets.

Vegetarians, this is your issue.