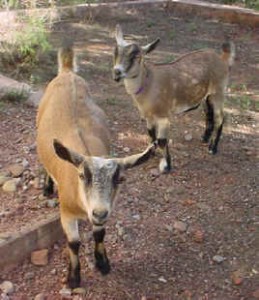 Is this amount of permeable land area per goat enough to be humane?  If not, what would be enough? Are there any reliable authorities that address this question whom I could quote?

I’ve been asking a number of people these questions lately, trying to come up to speed on a subject about which I have had little previous experience.  I’ve spoken to a neighbor who has actual experience with goats and has already written City Council on the subject, as well as various animal rescue organizations around the country.  This is what I’ve come up with.

As I sorted out what I’d heard from various people, I started out with just one narrow question, which the ordinance addresses, namely how much space do you allocate for goats?  But this inevitably led to further issues.

What about the space requirements?  Will your goat be happy with 130 square feet?

It depends on what you want.  Do you actually want the goats to be happy, keeping them as pets?  Or do you want to get the maximum amount of milk out of it and don’t care about the goat?  Or do you somehow want both?  I think a lot of people getting into goats fall into the third category: they want something practical, but they don’t want to cause too much suffering to the goats.  I’m going to address this third category, but keeping in mind both the ideas of the people who want happy goats as pets, as well as those who want goats for milk and don’t care about how the goats feel.

Goats are social creatures and a single goat will be a lonely goat.  They don’t bond with people like dogs do, nor are they solitary animals like cats.  So you will probably want two goats in a minimum of 260 square feet, not just one in 130 square feet.

My neighbor two doors down said that she thought the space allocated was a bit tight.  One person from an animal sanctuary agreed, and suggested that if you were really keeping a pair of goats you would want 1/4 of an acre on pasture.  Even if they were part of a large herd, they would need a minimum of 1/16 of an acre per pair.  That’s over 2700 square feet — so 260 square feet for two goats sounds really tight.

This raises the next question, what is the goat’s reaction to such a narrow space going to be?

Goats are playful and social and become easily bored — so often jump fences to explore. This tendency would be accentuated if kept in a small space.  Google searches can easily produce news stories about goats running loose, and this probably does not reflect all the cases of escaped goats.

This is asking for trouble.  Dwarf goats (the type allowed by the proposed ordinance) are notorious for jumping out of pastures and going onto other people’s property and destroying plants.  Of course owners can keep their goats confined, but will they?  Inevitably, as the popularity of goat ownership spreads, you are going to have a minority of people who don’t take proper care of their goats, and guess who is going to have to police this?

Here are some recent news stories about goats illustrating the kinds of problems you can have:

Escaping goats can cause a great deal of damage both to others’ property and to the goats themselves.  Many ornamental plants are highly toxic to goats so this affects them as well of course. Goats prefer brush to grass. Goats eat bark off trees and destroy them. Dogs are often the biggest predator to goats so safe fencing should also be mandatory.

Unfortunately when raising goats for meat, the goats are slaughtered so young that the ill effects of confinement don’t become apparent, and won’t be apparent unless the goats live much longer, when the stress and disease effects will become apparent. The stress is real on younger goats, but you can’t see it.

The problem you will run into is that industry standards are based on animals moving in and out quickly and raising healthy, happy animals is not part of that.  (Sundari Kraft’s arguments for 1 square foot of coop space per chicken is an example of this general attitude, though it concerns chickens, not goats.) People quote standards that are based on commercial livestock operations — when the owners don’t care anything about the animals.  This is where most of the information on their needs comes from, however, and raising goats for milk and meat is becoming more and more popular.

As with all farm animals the use of grain feed brings rats — which most towns frown upon. Anyone who thinks that livestock will not bring this kind of vermin is kidding themselves.  There will also be smell— to keep the area clean and to deal with the bedding used, etc.  You can compost the various waste products of this process, but where will town people compost? And will they?  Again you have the problem that inevitably there will be a minority of people who will not care properly for their goats, and who is going to police this?

The more land and space goats have the happier and healthier they are.  But inevitably, especially in crowded situations, goats will become sick.

Soremouth is the most common skin disease affecting sheep and goats. It is a highly contagious disease caused by a virus in the “pox” family. Soremouth is a “zoonotic” disease — meaning animals can transmit it to humans. Many physicians may be unfamiliar with the disease, so anyone coming into contact with goats needs to be sure to tell their doctor if they’ve been exposed to infected or recently vaccinated sheep or goats.

If the goats do become sick with any disease, what will happen?  Often the solution is to give antibiotics, but then this will make the goat’s milk not “organic.”  Will the owners let the goats fend for themselves and possibly die to keep the milk “pure”?  Or will they go without the milk while the goat is being treated?  Or will they drink the milk, perhaps unaware that they are getting a dose of antibiotics as well?

The whole idea that goat’s milk is healthy is somewhat comical to begin with.  Biologically, goat’s milk is intended for baby goats, and the nutritional needs of humans and baby goats are drastically different.  Goat’s milk has about the same, or even more, saturated fat and cholesterol that cow’s milk does.  Eating unhealthy food is not sustainable.

Even if you narrow the question of what is “humane” down to the treatment of the animal while it is alive (disregarding its ultimate fate), it is highly debatable whether goats can really be happy in an urban situation.  Does anyone think that goats that constantly want to escape — which is manifestly the case with urban goats — are happy animals?

Though many owners will be conscientious, it is inevitable that a minority of goat owners will not be and will mistreat their goats.  This sort of thing could happen very easily. The goats, and the city, will bear the consequences of these actions.

Whether you consider this whole process to be humane raises another question: does the animal want to be killed?  Goats need to be pregnant to produce milk, so by definition you have a likely goat overpopulation problem if you are raising goats for milk.  What is going to happen to the surplus goats?  A very few may wind up adopted as pets, but a lot of them are going to be killed.  The ordinance prohibits onsite slaughter, but carting your animal out of the county to be slaughtered would be legal.  (Where I live, “out of the county” is two blocks over.)

This is not just a problem for vegetarians.  I own a car and periodically need to take my car into the auto repair shop.  But that doesn’t mean I want the auto repair shop next door or even in the same block.  It is dirty, messy, and noisy.  The same rule applies to goats: the process of raising goats that will be killed is dirty, messy, and noisy.  You don’t have to be a vegetarian to question whether this should be in our back yards.

What is really offensive to me is that this is all being done in the name of “sustainability.”  What kind of nonsense is this?  Anyone who can add can see that goat milk and chicken eggs are going to be expensive way to get these products.  Most people start off as amateurs and a there are numerous opportunities to go wrong.  Even when done properly, it is going to be rather expensive, and the temptation to “cut corners” is going to increase the costs to the city and to neighbors in terms of “mistakes,” in terms of increased dirt, noise, and smell, and will also result in less humane treatment of the animals.

Raising urban goats is basically a rich person’s hobby imposed on the city in the name of “sustainability.”  It is going to be more expensive (in time, money, and effort) than just buying the same product on the open market.  If people want “local” goat’s milk and eggs they can probably do much better by just buying it from a CSA or a local farmer.

The planet is overrun with livestock: over 90% of all mammals on the planet (by biomass) are humans and their livestock.  And we want to bring more livestock into the city?  What kind of logic is this?  And goat’s milk and hen’s eggs are not even healthy for you; they are packed with saturated fat and cholesterol.

Key facts to keep in mind:

I’m not an authority on goats, but I think that if we all sat down around the table, talked to people with experience, and honestly sorted out the evidence, I’m pretty sure something very close to what I’ve said is what we’d come up with.  If I had time I might be able to compile all the references and footnotes, but since this whole thing is getting rushed through by the proponents of this ordinance, I have just put everything I have on the table.

It is my opinion that backyard goats will leave Denver a nastier, dirtier, and more brutal city than it was before.  It is really the weakest part of the proposed ordinance and I am slightly surprised it has gotten this far.