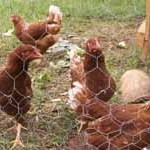 Somehow, amidst all the glorious success stories that supporters tell about cities who have promoted backyard chickens, feral chickens never get mentioned. The problem of feral chickens represents another problem for supporters of the proposed “food producing animals” (FPA) ordinance. Feral chickens have proliferated in New Orleans ever since Hurricane Katrina. However, lest we think that this problem is unique to the aftermath of Hurricane Katrina, the Honolulu Star-Advertiser recently gave some advice on how to deal with feral and nuisance chickens in Hawaii, and feral chickens are now reported in Lakeland, Florida. More than 600 chickens are estimated to be in northwest Lakeland.

The chickens are pretty smart and fast so they are hard to catch, according to some of the chasers. “The chickens, this is their woods,” chicken chaser Clayton Keene said. “They go underneath houses and cars and in trees. They know where to escape from you.”

Of course, this could never happen in more northerly cities like Denver or Minneapolis, because chickens are tropical jungle fowl — they wouldn’t make it through the winter. This doesn’t mean that chickens won’t be abandoned in this manner, though. It just means that they’ll die of frostbite or exposure.

Is this the kind of future that Denver has? In ten years, will animal control be chasing down feral chickens, or will abandoned chickens turn up dead of the cold? Is this something we want in our neighborhoods? Stay tuned.

UPDATE May 5, 2011: I imagined that this could not happen in northern cities, but evidently it does.  In 2009, a South Philadelphia block was colonized by chickens.  They evidently could survive the winters, because they had evidently been around for several years at that point.  Animal control tried to round them all up, and got a few, but ultimately failed.  And there are feral chickens in the Bronx, New York also.  This could be Denver’s future, and the way things are going, probably will be.

Thanks to the blog Albany Citizen One, which covered the recent “debate” on backyard chickens in Albany, and to Veganning, who brought all of this to my attention.