Figuring out how to live with a pet can be a challenging experience, just because animals are different from humans. Even in the case of dogs and cats, which are common enough in our society so that knowledge of their care is very widespread, figuring out their proper care is not trivial. But dealing with a new kind of animal, like chickens and goats, can be a major challenge. If you try to spread the acceptance and adoption of this kind of animal, a lot of people are going to get it wrong. Chicken Run Rescue in Minnesota runs into this sort of problem all the time. They have posted some photos on their Facebook page.  These sorts of problems don’t show up on the radar screen of city officials because, of course, no one files a complaint. Who is going to complain? The chicken, perhaps?

Unlike a mistreated dog, who may howl until they become a nuisance, a mistreated chicken may never come to anyone’s attention. Even the owner may be unaware of it.  The animals may die, or be abandoned.  City officials in cities that allow backyard livestock will merrily report that all is fine, the backyard chicken enthusiasts will be pleased, and other cities will be tempted by this “positive experience” to adopt similar policies.

Here are some concrete and recent examples of what happens to abandoned animals.

1. Ola, a duck, came in to the sanctuary covered in feces and with frozen feet.  Ola’s feet bear witness that her past life was dirty AND cold. She lost the toes on both feet but with special accommodations is able to swim in shallow water, although she has difficulty climbing out. 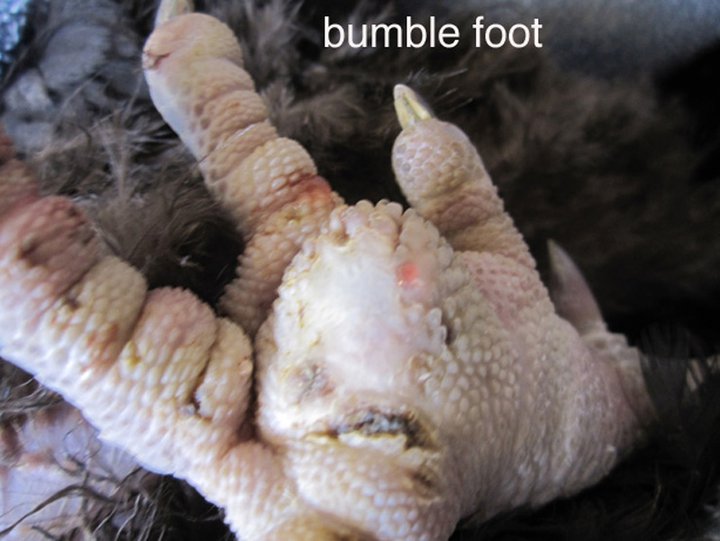 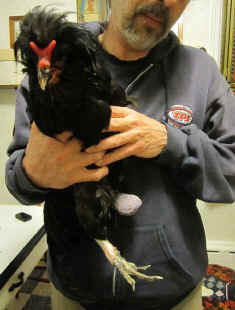 Cal had to have one of his feet amputated

2. Cal was also left out in the cold. His feet were frostbitten and will have to be amputated (one down, one to go in the picture on the left). He also was infested with lice and mites (right). Says Chicken Run Rescue: “Our vet is an avian specialist with 38 years of experience and he is continually amazed at how adaptable and resourceful birds can be after traumatic injuries and good care.” 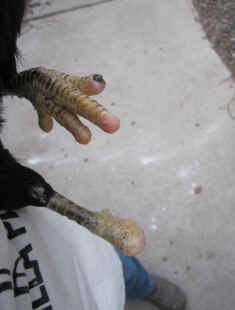 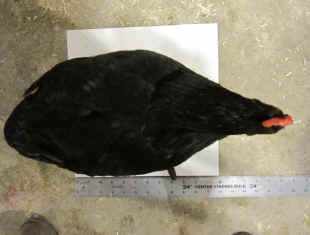 Miss Manor demonstrates that 1 square foot is not enough

3. Miss Manor also came in with frostbite (left), though she is now making good use of what she has left. Before Mary Britton Clouse recently came to Denver, Miss Manor was photographed on one square foot of paper, and this photo was shown at a local neighborhood meeting. Sundari Kraft, a prominent local proponent of backyard chickens, has defended the one square foot standard as an adequate amount of coop space. 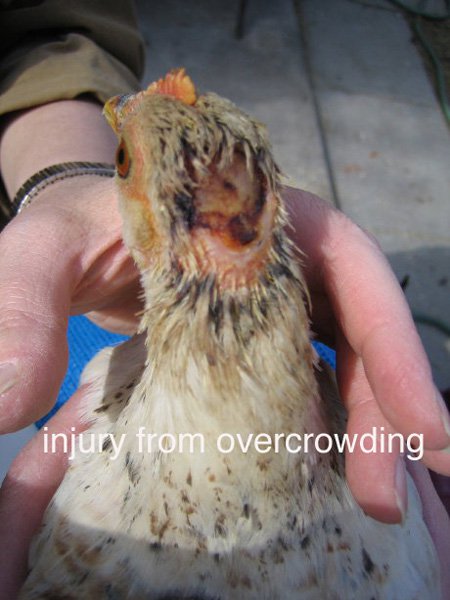 What this demonstrates, I think, is that there is widespread ignorance of what chickens need. Chicken Run Rescue sees the results of this kind of ignorance all the time. Denver will see it too, if this ordinance passes, whether or not it gets officially registered as a “problem” for the city.

“There is no warm fuzzy way to go about doing egg production, period.” — Michelle at the Peaceful Prairie Sanctuary.