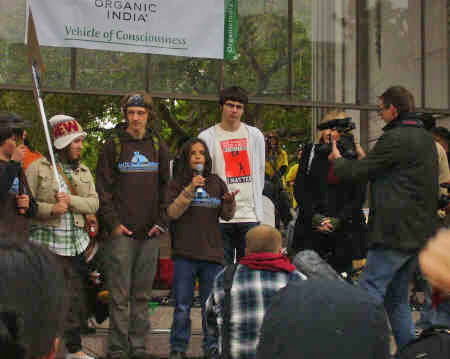 We joined the “iMatter” youth-led march for climate change action yesterday, shortly after it left Cuernavaca Park in Denver. There were several hundred people who marched up 15th Street to Civic Center Park. We had our “Go Vegan” signs, and weren’t quite sure where we would fit in, but finally joined the march just in front of the Greenpeace contingent, which looked like the most animal-friendly bunch. 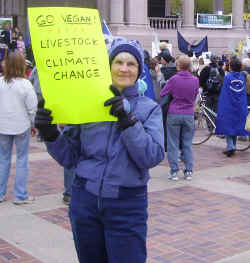 We quickly overcame our fear about being out of place as vegans. During the march, Kate found another vegan from Boulder whom we both knew. In addition, two of the Greenpeace people (whom we had never seen before in our lives) approached us and thanked us for showing up with our signs. One of them had been a vegan for 30 years, another for 10. Today, I got a call from another vegan who had seen us, but with whom we hadn’t connected. So there were at least six vegans there! It was great to be able to find like-minded people so easily. 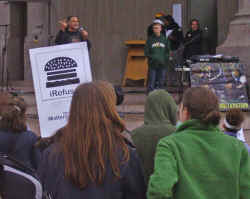 A number of signs reflecting the “iMatter” theme were found throughout the march. There was “iReduce,” “iRecycle,” and others. One I especially noticed was “iRefuse,” together with a picture of a hamburger on a bun. That was a sentiment we felt we could get behind! Alec Loorz, one of the founders of iMatter, called for a compassionate revolution which we wildly applauded. (Alec founded “Kids vs Global Warming” when he was 12 and is still working hard leading the youth on this issue.) 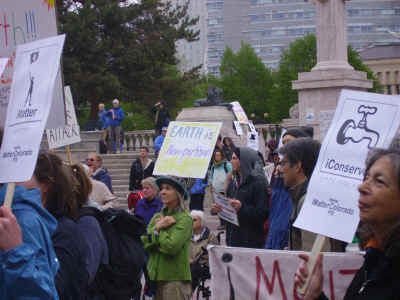 It’s important that vegans become involved in the environmental movement. If we as vegans don’t start talking about the environment, no one is going to even be listening to us when we talk about anything else. Livestock agriculture is responsible for at least 18% of all greenhouse gas emissions (according to the FAO), or it could be more like 51% (according to a WorldWatch article). Over 90% of the biomass of all the mammals on the planet are humans and their livestock — leaving less than 10% of the biomass for all the wild mammals such as elephants, giraffes, lions, tigers, raccoons, squirrels, and deer. 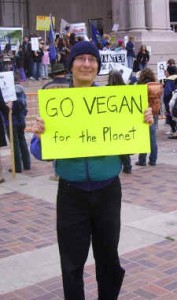 Climate change, peak oil, and financial collapse are all related. Food prices are an almost exact mirror of oil prices; our industrialized food system is heavily dependent on fossil fuels. We could do without a lot of what fossil fuels have brought about — our consumer lifestyle, with TVs, cars, and the like. But without food, life isn’t possible. Today, our industrialized, meat-oriented food system heavily depends on fossil fuels, something of which most people are only dimly aware. When the environmental movement realizes that we have to move towards veganism if we’re really going to fight the environmental disaster, we’ll know that they’re serious.

If you missed this march, you can relax. There will be more. Get involved, vegans! This is your issue.