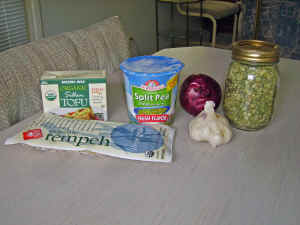 Many people are suggesting meat analogs as a way of encouraging people to go vegan or adopt a less resource-intensive diet. Meat analogs are useful in promoting veganism because they make it easy for the new vegan. They include both off-the-shelf products such as Tofurky, which just need to be heated, as well as products which typically require further preparation like tofu and tempeh, but which have a meat-like texture and feel.  They are widely available, they are easy to fix, and they are familiar in taste and texture. 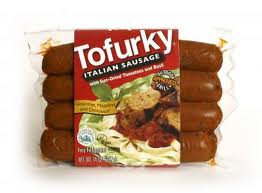 I am sympathetic with the basic thrust of those promoting meat analogs; why shouldn’t we make it easy? Nevertheless, meat analogs create a number of problems in the promotion of veganism.

It is widely known that meat analogs are typically not as healthy as cooking and eating unprocessed whole plant foods.  Many experienced vegans roll their eyes when they hear meat analogs discussed.  If you gave unprocessed whole plant foods an “A” on nutritional grounds and meat and dairy products a “D” or an “F”, where would you put meat analogs?  Fake lunch meats, fake bacon or sausage, and similar processed ready-to-eat foods would likely get a C from most vegans.  Anything with soy protein isolate might get a C- or even a D+.  Yes, it’s better than eating meat, but it’s not the best diet. Tofu, tempeh, and seitan would do somewhat better, ranging from C+ to B or thereabouts among most vegans.  Not bad, but not the best.

Experienced vegans also believe, with good reason, that proper veganism requires appropriate skills and some knowledge of nutrition and cooking, which this approach neglects. Using analogs is basically the “TV Dinner” approach to veganism: here, buy this, now you’re a vegan.

There’s a deeper problem, though. Meat analogs, which can often be bought off the shelf, heated, and eaten directly, are available and convenient for a reason.  There’s a market for them. This may not sound like a problem at first, but it is.

The whole problem with our society is that it has become excessively commoditized. Anything that can be easily marketed is going to attract all the money and the attention, bypassing other ways of being that are harder to market but usually more effective. The people who came up with Barbie dolls made tons of money, while people who are trying to teach children how to play with each other, or parents how to interact with their children, did not.

So if you were trying to make a living in child care, what would you do? I’m sure there are a lot of idealists out there who would become kindergarten teachers, day-care providers, and the like, but that’s not where the money is. The big money is in Barbie dolls. Barbie dolls are portable. They can be easily transported, traded, and sold. They are easy to price. It’s easy to assign property rights to them.

On the other hand, trying to sell knowledge of how to interact with children is much more difficult. It’s harder to price; you have to determine whether a person actually knows about children based on their resume and experience. It’s harder to market, because knowing the basic techniques of dealing with children is not an object like a Barbie doll. Once someone else picks up this knowledge, the expert teacher has lost their exclusive possession.

The same dynamic operates in terms of veganism. The very qualities which experienced vegans value are the very ones which are hard to market, namely cooking skills and nutritional knowledge. Sure, you can try to make money off of it, and a very small number do that. You can be Kathy Freston and get on Oprah. You can open your own vegan or vegetarian restaurant, endure back-breaking work and constant money hassles, and barely scrape by.

However, for every one person who is able to make money out of their cooking skills and nutritional knowledge, there are hundreds who are quite knowledgeable about these subjects, but are just taking care of their families or impressing their friends at potlucks. This has value all right, but it’s not the sort of thing you can take to the bank.  The people who are manufacturing tofu and the vegan “sandwich meats,” however, are making real money.

It is interesting that Dr. John McDougall is now behind “McDougall’s Right Foods,” which includes a line of packaged instant low-fat soups. My favorite is the Split Pea soup and we like to use them on road trips when the only kitchen device we will have in a motel is a microwave.

However, the basic information that Dr. McDougall is putting out is, in effect, free. At home, it would be much less expensive (and not that difficult) just to make split pea soup. But where’s the money in that? At best, you might try to write some cookbooks, and we all know how lucrative that is.  I’m certainly not faulting Dr. McDougall for doing this, by the way (and thank you very much for the Split Pea Soup), just pointing out how our economic system distorts things.

Is this a problem?

So what’s a vegan to do? Is this just the way the world is? Should we just get used to it and adapt?

The “Barbie doll effect” also applies to medical care. You cannot make very much money telling people to stop eating animal products. If you could, Vegan Outreach would be rich! But you can make quite a bit of money selling pills to control blood pressure; pills are much more marketable.

Nor can anyone make very much money telling people that we are destroying the atmosphere with greenhouse gas emissions. But there is a great deal of money to be made in producing products that create greenhouse gas emissions. Guess where all the investment dollars are going to go?  Even when “green” solutions are contemplated, it is another commodity, such as an electric car or solar panels. Just consuming less would be a lot more effective and less expensive — but where’s the money in that?

The environmental movement is going to result in a social revolution. Young people are talking about it. Nothing will be done about climate change, or about peak oil, or about deforestation, soil erosion, or any of the rest, until we have a social revolution, a complete change in our way of life.

Don’t get me wrong; we need commodities. I like my instant Split Pea Soup on the occasions when I need something more convenient. But today commodities have taken over the world, and they are driving our entire economic and social system. Commodities should serve the environment and human well being, not vice versa.

As more and more people realize this, vegans run the risk of being caught on the wrong side of history. We risk being seen as people who eat a bunch of high-class “junk health food,” or as an arm of the soy foods industry. We risk focusing so exclusively on converting people from non-vegans to vegans, that we overlook the equally significant problem of keeping people who are already vegan.

In the late 1970’s, a lot of people became vegetarians but went back because they didn’t know what being a vegetarian actually involved. New vegetarians had only the most rudimentary knowledge of nutrition and cooking, even less knowledge of how to cope socially in a non-vegetarian world, and nowhere to turn. There were few vegetarian (and almost no vegan) organizations at all.

As a result, in the 1980’s, when I would tell people I was a vegetarian, I would repeatedly get stories like this: “Well, I used to be a vegetarian, but one evening we were dining out with friends, and they ordered steak and so did I, and that was the end of my vegetarianism.”

By all means, let us have meat analogs. But let’s also not forget that veganism is not just something you buy off the shelf. It is a way of life.

3 thoughts on “The Commoditization of Veganism”