[Spoiler alert: in case you haven’t already seen the “Year of the Dog,” this article totally gives away the plot.] 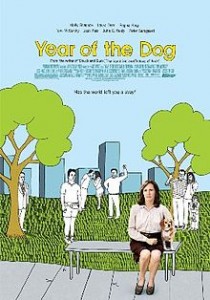 “Year of the Dog” is a 2007 “dark comedy” about Peggy (played by Mollie Shannon), a young single woman and animal lover whose beloved pet dog dies. She becomes and stays vegan and becomes an activist. It comes highly recommended by some vegans. It is on the VegNews list of 10 must-see films. The portrayal of the central character is basically sympathetic; the screen writer is evidently a  near-vegan and intended the movie as sympathetic to veganism.

I’m sorry: I would not recommend “Year of the Dog” either for vegans or non-vegans, except as some sort of punishment, or so movie critics could hone their skills writing acerbic reviews (like about “Plan 9 from Outer Space”). Wonder Vegan (Bethany Fehlinger) has written an excellent review which summarizes the main problems.

Here’s the first problem. The first part of the movie does indeed read just like a piece of vegan propaganda — in fact, so much so that I almost cringed. But after Peggy becomes vegan, she basically goes off the deep end and does a number of things, many of which were extremely unwise and some of which are completely illegal and immoral. She commits forgery and embezzlement, using the company’s money to support various animal organizations. She adopts 15 dogs in one day (in the movie, 3 is the legal limit). And she tries to kill her neighbor who is a hunter. (Yes! In order to give him, she explains, the experience of what it is like to be hunted.)

My first objection is strictly literary. Even given “poetic license,” much of this plot is totally unrealistic. Yes, people do commit forgery; yes, there are animal “collectors”; yes, there are people who try to kill other people. But Peggy does it all in a very short period of time and ultimately suffers very few consequences! She doesn’t do jail time, in fact it’s not clear that she’s even arrested! She doesn’t even ultimately lose her job!

My second objection is of its portrayal of vegans. Of course there are a lot of vegans who would like to do these things and so it might be a good portrayal of vegan fantasies, but vegans don’t act this way and it perpetuates stereotypes of vegans as basically untrustworthy, deceptive, and violent. At the same time, it is clear that you are supposed to feel sympathy for Peggy, thus saying in effect that it is all right to be untrustworthy, deceptive, and violent. It reminds me of these movies where the detective’s wife is brutally murdered, there’s a cover-up by corrupt cops, and so the detective is forced to do a bunch of illegal things to bring the bad guys to justice.

So first of all the movie is unrealistic, and secondly it has a discordant ethical tone.  Yes, there was some good acting, and it mostly held my interest, but basically I can’t recommend it.

All right: we know that a lot of movies are not realistic. How many times do we see an amazing coincidence which brings the two lovers together, or something like that? I think I could forgive one or the other of these two issues, but to have them both together is just intolerable. In other words, I might tolerate a less-than-realistic series of events, if Peggy acted in a principled way; or I might tolerate Peggy’s lack of principle, if the consequences unfolded more realistically.

Or, the movie could have compromised at both ends. If they had asked me, I would have focused on Peggy’s tendency to collect animals. I would have turned the forgery, embezzlement, and attempted murder into “fantasy” sequences where Peggy is day-dreaming (like in “Bridget Jones: The Edge of Reason”).  I would have allowed her to collect animals gradually, for her neighbor’s complaints gradually to grow, and finally she loses the dogs and perhaps there’s a court scene.  In the meantime, as in the actual movie, her attempted romance goes bad but she realizes that this is more than just a guy, it’s a cause, no — it’s a way of life.

However, did the script writers ask US our opinion? NO.

And here we have the root cause of why there are so many bad movies being made these days: failure to consult US about OUR opinion. WE could have given much excellent advice and have immeasurably improved the state of the American cinema.  : – )