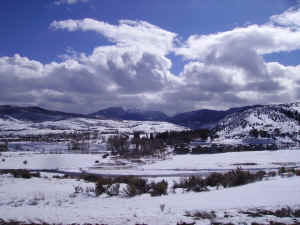 Can we have both economic progress and save the environment? Yes, we can have a sustainable economy and keep people employed, feed the hungry, and keep everyone warm during the winter. But the country as a whole will be poorer — a lot poorer — and it is a mistake to underestimate the costs. This may sound like some Republican argument, but it is the truth, and the country needs to face it, and the equally important truth that we have to make these painful changes anyway.

This is a pretty tough topic, addressed in the Autumn 2011 issue of the Colorado Environmental Coalition newsletter, page 4, in an interesting article by Randy Moorman entitled “It’s the Economy and the Environment, Stupid!” While I agree with the basic pro-environment direction of the article, I feel it is a huge mistake not to acknowledge the tremendous social, political, and economic costs.

The economy is part of the environment — not vice versa. As such, the economy is subject to basic environmental limits. We have reached the limits to growth in the economy already. All fossil fuels are depleting, and oil especially — peak oil is here. All fossil fuels are furthering catastrophic climate change which could literally end all life on the planet. We also face a number of other limits as well, such as declining mineral availability, unsustainable soil erosion, and water scarcity, in case you have run out of things to worry about. In the meantime, here are a number of quick sobering facts to keep in mind:

1. Alternative energy has a lower energy return. There is alternative energy, like wind and solar, but it is going to give us a lower energy return on energy invested (EROEI) than is oil and coal, and storage issues will likely reduce EROEI (and increase cost) somewhat further. It can be done, and it should be done: but we shouldn’t kid ourselves. It’s going to be more expensive, and we will face a declining standard of living. Nuclear is also problematic, but once you see the problems with solar and wind, you will see that nuclear energy may not be quite as stupid as we previously thought.

2. We have a liquid fuels crisis more than an energy crisis. Our alternatives (even if we include nuclear) only produce electricity. Electricity is nice but won’t help that part of the economy that depends on liquid fuels, which is huge — cars and trucks, for example. Long story short, the switch from a liquid fuels transportation system to an electric transportation system will be quite problematic and expensive. Because of battery issues, most likely we’ll have electric trains but electric cars and trucks will never be widespread. Try to put that in your State of the Union message and imagine how it’s going to go over, and you have a good start on imagining the kinds of problems we’ll have.

3. The energy transition will be very expensive. Not only do we face “limits to growth,” but investing in the new energy transition is going to cost a huge amount of money and energy. We’ll not only need wind turbines, solar panels, etc., but also the infrastructure for an electric transportation system. Ultimately, we’ll also need an electric way to mine minerals. All of this will cost money and energy. You’ll see an even further depressed economy because just at the time when oil supplies are declining (peak oil), energy that could have been spent on consumer goods will be invested in infrastructure instead.

Tom Murphy summarizes the advantages of fossil fuels: “Fossil fuels are cheap and reliable and are their own storage and allow transportation by car, truck, ship, airplane, and fit seamlessly into our current infrastructure.”

4. The financial system will collapse if it can’t grow, and it can’t. We have trillions of dollars in debt in the United States, which has dramatically escalated in the past decade, and attention Republicans: most of this is private debt, not government debt.  How will it be repaid?  This debt has been taken out with the expectation of “business as usual,” namely the resumption of economic growth.  If energy gets more expensive (as it must), then everything will get more expensive, people will cut back on spending, and then we’ll see a downward spiral of economic collapse, as almost happened in 2008.  Businesses will cut back jobs, people will stop spending, loans won’t be repaid, banks will fail, leading to further business cutbacks and the spiral will continue.  The 2008 experience will be repeated, and this time we may not emerge from the economic hole we’re in.

Look at previous energy transitions — in the U. S., from wood to coal took over a century, and from coal to oil took many decades. And in these cases, the new fuel was more advantageous economically; but going from oil to solar or wind is going to a less advantageous form of economic energy, even though it’s obviously much better for the environment.

The narrow question of whether we can all have jobs or income during this energy descent — which was Moorman’s original question — is one which, I believe, we can answer positively. Yes, we can, but it will require completely rethinking our economic system. This is not something we will be able to get to incrementally, step by step. It requires a revolution that no one in Congress is even talking about.

We would need to redress the huge economic inequality within and between nations; we will need the cooperation of the poor to make this energy descent work. Otherwise, you’ll have a revolution of the unpleasant variety which will attempt to resurrect economic growth — which will turn out to be impossible, thus furthering increased unrest, and so forth in a downward spiral. We would need thereafter to place limits on the use of natural resources, letting the market allocate what we would then produce on the basis of what is ecologically sustainable and feasible.  We would need to radically restructure our approach to money and debt.

So I agree with the implied conclusions of Randy Moorman’s article that we should encourage the switch to a more sustainable economy. But it is a serious mistake to downplay the costs. If we want to avoid social and political collapse, we need to plan a transition to a lower standard of living that keeps everyone fed and warm during the winter, and we need to be honest about the huge economic, social, and political costs which this will involve. Let’s face it, gang — the party’s over.