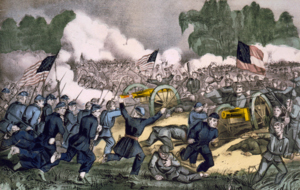 James McWilliams, with great insight, takes this analogy seriously. He argues that the anti-slavery movement needed both compromisers and radicals. If the radicals had gotten their way in 1790, the U. S. might have split in two permanently long before the Civil War. But without the radicals in the 19th century to push the principle of abolition, slavery might never have been abolished at all.

He’s right, of course. We need both a radical wing and a moderate wing of advocates for animals. And more good news — we’ve already got them! However, there is something unsettling about the “dreaded comparison” between slavery and animal exploitation, when we look at what the end of slavery really meant for the country. I’m wondering if vegans are thinking about these as well?

1. The Civil War was immensely destructive. Hundreds of thousands of people were killed — the modern equivalent of millions of Americans killed, proportional to the population of the time. Realistically, no one wants this kind of event to usher in the age of veganism.

2. The Civil War was  not “about” slavery for the vast majority of those who participated in it. Let’s be clear: slavery was the key cause of the Civil War; without slavery, it wouldn’t have happened.  But abolitionists were a minority, and most Northerners were racists. They didn’t want slavery in the territories because the slaves were competition! The idea that the Civil War was “about” the morality of slavery is the pious invention of modern sensibilities. The abolition of slavery was always a secondary objective to the preservation of the Union. (Two good books to read on the subject: Gary Gallagher’s The Union War and David Goldfield’s America Aflame.)

3. The Civil War delayed the end of slavery. The conditions of former slaves in the South after the war was sometimes worse than under slavery, as they sunk to the lowest social rung in a war-torn region. The South as a whole was devastated by the war and ignored afterwards, and sunk into a deep economic depression that lasted for generations. It was not until 1920 that the economic conditions in the South reached the level of 1860. I am old enough to remember that the 15th Amendment, which guaranteed the right to vote to former slaves, was a myth in much of the South until my own lifetime.

I read the lessons of the abolitionist movement very differently from most vegans who raise this issue. Most vegans think — the abolition of slavery was a success, so how can we emulate their strategy?  But I’m less concerned about how the various factions of the anti-slavery movement interacted with each other, than I am with the convulsive and violent events that (eventually) ended slavery. Instead of asking whether we should be reformers or abolitionists, we should be thinking about a different question — are there deeper issues in American society, are they coming to a crisis, and how does veganism fit into the context of these issues?

American history shows that we have long periods of relative social stability punctuated by briefer periods of violent and tumultuous change — the American Revolution, the Civil War, and the Great Depression and Second World War. This is a bit of a simplification, because the “quiet” periods sometimes featured violent events like the war of 1812 and the Vietnam War. But there is a basic truth here. Even though the war of 1812 and the Vietnam War were quite serious, they never approached the level of the American Civil War or the Second World War in their impact. The Vietnam War did not lead to any lasting changes in American foreign policy; soon we were back at the business of minor undeclared wars like Afghanistan and Iraq.

It is during these periods of major crisis, like the American Civil War, that the most significant social changes occur. I would argue that we are now entering another crisis period, in fact that we have likely been in it for several years. The current crisis has nothing to do with independence from Britain, a house divided, or fascism in Europe and Asia. It has to do with the environment — climate change and resource depletion.

There is a debate within the environmental movement over the exact nature of this crisis. Alas, most vegans are not even aware of it, much less taking part in it. It doesn’t have to be this way. We could understand the current environmental crisis as a more general problem of the entire human relationship with animals and nature, a crisis which calls for a reshaping of our strategy, a crisis which requires that we focus on plant-based diets. Is anyone in the vegan community paying attention?