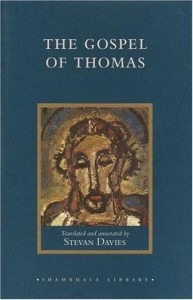 The Gospel of Thomas, discovered at Nag Hammadi, doesn’t contain anything obviously vegetarian.  In saying 12 Jesus advises the disciples to follow “James the Just” after he is gone.  Saying 71 has Jesus saying, “I will destroy this house,” which reminds us of the gospel sayings about the temple being destroyed.  Both of these hint indirectly at vegetarianism.  James, the first leader of the church after Jesus, did not eat meat or drink wine, and in fact was raised a vegetarian.  The temple was the place where animal sacrifices were offered, therefore if Jesus was trying to destroy it, he may have been against animal sacrifices.  Besides these vague hints, though, Thomas doesn’t seem to say anything that could give comfort to vegetarians; certainly there isn’t anything along the lines of “thou shalt go vegan.”

However, in his book The Gospel of Thomas, translated and edited by Stevan Davies (Shambala Publications, 2002), Davies argues that vegetarianism can be found in the Gospel of Thomas.  He points to sayings 7, 11, 87, and 111.  His translation isn’t radically different from other translations; it’s his insightful analysis which really stands out.

When I first read saying 7 above (“Blessed is a lion that a man eats”), I have to say that I did not extract any particular vegetarian message at all.  It sounds like Jesus is telling us to go out into the jungle, hunt lions, kill them, and eat them — and the lion will benefit!  But if a lion (which, unlike a human, is a natural carnivore) chances to eat a man, well, too bad for the lion. Jesus seems to be promoting an extreme form of carnivorism.

Davies points to several passages in Thomas which put this saying in a new light.  First, if you eat things, the things you eat become alive.  Saying 11 contains this: “When you ate dead things, you made them alive.”  (This is repeated in saying 111.)  How do you make them alive?  Through digesting and metabolizing them.  Saying 87 says, “wretched is a body depending on a body.”  How does a body depend on a body?  If the body eats the other body.  Therefore, Davies concludes, Thomas is not saying that all bodies are wretched, only bodies which depend on other dead bodies (i. e., meat) for food.  These sayings contain a “vegetarian criticism of meat-eating,” and imply a “vegetarian perspective,” according to Davies (p. 10, 90).

We can now go back to saying 7.  Yes, literally considered, this implies that we are going in search of lions to eat.  But even if Jesus wanted to promote meat-eating, this saying wouldn’t make sense. No one, today or in ancient times, hunted lions for food.  This saying has to be symbolic.  I mean, after all, it is the Gospel of Thomas, which is announced as a book of “hidden sayings,” with some pretty obscure and mysterious sayings which sometimes resemble some of the koans of Zen Buddhism.

So if we consider saying 7 as symbolic, when Thomas talks about “the lion becomes man,” what does he mean?  This refers to the process of digestion; if you eat and digest something, what you digest then “becomes” you.

And what could the “lion” stand for?  Davies argues that it is a metaphor for ignorance, but I have another idea.  Most likely, it stands for the lion-like attributes within all of us. What are lion-like attributes?  They involve courage, conflict, battle, and domination.  Our lion-nature includes meat-eating, but it is more than that; it is the whole process of desiring domination which includes meat-eating as one of its consequences.

I highly recommend Davies’ book.  Thomas is one of the oldest of the gospels; many have argued that it is older than the canonical gospels.  Thomas gives vegetarians looking for vegetarian sayings in the gospel some new insights into the spirituality of the early church which include the practice of ethical vegetarianism.