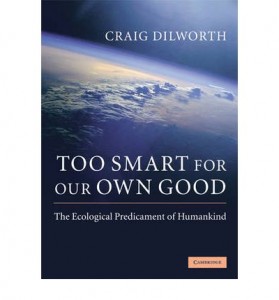 Too Smart for our Own Good: The Ecological Predicament of Humankind.  Craig Dilworth.  Cambridge University Press, 2009.

Wow, what a book! Craig Dilworth, a Canadian professor of philosophy, has written a significant new book on our ecological predicament. I hope that everyone who is interested in any sort of environmental issues, including and especially vegans, should take a look at this book.

Dilworth is not content just to rehash the standard anguish over the environment, but to show where our environmental problems really come from.  They come from our very nature as a species — from our own inventiveness.

Whenever humans are faced with shortages, they come up with a new technology.  This could be anything from how to start a fire all the way to a modern computer, and everything in between — agriculture, the wheel, and the steam engine.   The result of this innovation is that — it works!  The shortages are alleviated, new resources are discovered or made available, and in fact a surplus is created.  But as a result of this surplus, consumption increases and so does population.  Eventually, increased consumption and population catch up with us, and we are faced with shortages all over again, which makes a new technology necessary.

Dilworth calls this the “vicious circle principle”: we get ourselves out of one fix, only to land in another, depleting resources as we go.  It is not our failures that are the problem, but our successes.  We are too smart for our own good.

Malthus was on the right track when he said that population tends to overshoot the food supply, which can only be corrected by misery or vice.  But Malthus was wrong on several counts.  First, these shortages could be things other than food; and second, Malthus overlooked the role of technology.  Dilworth shows that the very factor that Malthus overlooked is the key to understanding our environmental dilemma. Technology makes new resources available, resulting in surplus, increased consumption, increased population, and then a new scarcity.  This circle continues until at some point all the earth’s resources are exhausted.  At that point — well, that’s where we are right now.

Why this book is convincing

This book convinces me for a number of reasons.  There is a strong interdisciplinary focus.  These are not vague generalizations, a la Michael Pollan, together with a sermon.  He dips into everything from evolutionary biology to basic physics.  There is too much specialization these days, and our human problems overlap numerous disciplines; in fact there is scarcely a discipline which is untouched, from physics to anthropology.  Dilworth demonstrates a clear technical grasp of all of these.

Many years ago, I read Mark Nathan Cohen’s book The Food Crisis in Prehistory: Overpopulation and the Origins of Agriculture, which deeply influenced me.  Dilworth quotes Cohen a lot and clearly approves of his work. Cohen’s thesis — that food shortages in prehistory were the driving force behind the introduction of agriculture — immediately made sense to me.  It’s a bit counter-intuitive, because it is hard to think of the world as being “overpopulated” when there were only three million humans on the entire planet, but of course this overpopulation is relative to the hunter-gatherer technology of the day.  In fact, pre-agricultural humans drove many well-known large animal species to extinction, such as the wooly mammoth, the saber-toothed tiger, and many others.  Humans were running out of animals to kill, so they turned to a new technology, agriculture.  Just as the “easy animals” were gone when we turned to agriculture 10,000 years ago, so the “easy oil” is gone in our contemporary society.

Dilworth also refers to Herman Daly (co-author of Ecological Economics: Principles And Applications) and the discipline of ecological economics, which deals with the same issue of technology and resource depletion from the point of view of modern economics.  New technologies all have the same result; they tend to further exploit existing resources.

It is this discussion, stretching across multiple disciplines, which convinces me that we are not just dealing neither with an ethical problem of “greed,” nor with a political or an economic problem.   We are dealing with a biological problem.  By the way, Dilworth has some impressive blurbs in his support from people like Herman Daly and David Pimentel.

Need some empirical support before buying this idea?  The bulk of Dilworth’s book is an overview of the last 7 million years, right up to the present day.  He goes back to apes, protohominids, and Austrolopithecus (up to 7 million years ago) to show that “tinkering” is part of our nature.  It is part of our species’ “karyotype.”  Our ecological predicament arises not out of greed, or a perverse political or economic system, but out of our very nature.

So what does this mean?

Oh no, human nature is the problem!  What can we do, if this view is true?  Can we change human nature?  Kate (my wife) suggested that perhaps a better and shorter title for Dilworth’s book is We’re Toast.  Dilworth himself, in this YouTube video, seems to think that humankind is headed for near-term extinction.

I don’t think that the acceptance of Dilworth’s theory necessarily means that this is “the end.”  Rather, it helps us to identify what the problem is and what therefore needs to be done (if anything).  Specifically, we should stop worrying about coming up with better solar panels or more efficient car engines, because that doesn’t address the real problem. It’s with the exploitation of the surplus that is the result of our inventiveness.

One possibility is that this is the end of homo sapiens, but that a biological successor or relative of homo sapiens might come along that could restrain its urge to deplete resources.  I have no idea how this might happen or how much and what kind of genetic modification would be necessary.  Something like “Rise of the Planet of the Apes,” maybe?  There is a science fiction novel, The Windup Girl, in which there are genetically modified humans who are created as a servant race for humans in a future world of catastrophic global warming and resource depletion. The heroine of the novel (and “title character”), in fact, is just such a human. At the end of the novel, it is suggested that these genetically modified humans may actually be more fit than the original “natural” version.

The second possibility is that while our tendency to deplete resources is part of our genetic makeup, there are other aspects either of culture or biology that could override it. There are many things which are part of our nature, which circumstances can override.  One interesting example is population control. As Dilworth points out, as well as Steven Pinker in his book The Better Angels of Our Nature, infanticide was the primary method of population control until very recently.  Now you know that killing your own infant child has to be a terrible thing, and the instinct to protect one’s own children has to be very strong for straightforward evolutionary reasons.  Yet this primitive and natural urge can be overridden by external factors.

So if we can override the basic instinct to take care of our young, why can’t we override the basic instinct to tinker and consume resources?  Clearly this wouldn’t be easy.  It’s likely that there would need to be some traumatic event to trigger such a modification to our social structure and spread it over the entire world.  But that doesn’t mean that it’s not possible, and we might want to devote some thought to what this would mean and how it could be carried out. In fact, it could be argued that this is just what “ecological economics” is trying to do. Perhaps Dilworth’s next book, which he says will be titled “Simplicity,” will give us some further insights.

Thanks for writing this, Dr. Dilworth.

3 thoughts on “Too Smart For Our Own Good”