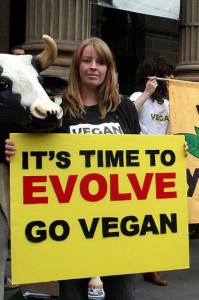 Kathy Freston recently published a blog on the Huffington Post which argues that “humans are natural vegetarians.” She wants to combat the perception that “eating meat was an essential step in human evolution.” The evidence she cites is actually quite good.  She mentions the China Study, noting that substantial genetic modifications only occur over the space of tens of millions of years, and the fact that we are anatomically closest to species (past and present) which are vegetarian.

There are several significant problems, though.  What do we mean by “human” and what do we mean by “natural”?  Unless we separate out what we mean by all this, the arguments will be endless and unresolvable.  And there is one key issue, megafaunal extinctions in the past 100,000 years or so, which can most easily be explained on the basis of the dominance of hunting, and which is very related to human evolution.

So what is “human”?  Are we talking “homo sapiens,” “homo erectus,” Australopithecus, or what? How far back do you want to go? Anatomically modern humans go back about 200,000 years before the present (BP).  But other hominid ancestors go back millions of years BP.  And what do we mean by “natural”?  Do we just mean what humans, historically, ate at an earlier time?  Or do we mean the diet on which they do the best, however that is defined?

If you go back far enough, yes, indeed, we are vegetarian.  There seems to be agreement that Austrolopithecus, four million years ago, was basically frugivorous.  Because genetic changes occur over much longer time frames even than this, you can make a good health argument that humans are naturally evolved to eat a vegetarian diet. This is in accord with modern studies, such as the China Study, which show the same thing; humans thrive on a plant-based diet.

However, at some point in prehistory hunting enters the scene, and it is a well-established behavior by the time humans “officially” made their entrance onto the stage, about 200,000 years BP.  While it is true that hominids were initially scavengers, not hunters, between about 2 million and 1.7 million years BP, there was a dramatic increase in the height of hominids. (See “Animal Source Foods and Human Health during Evolution,” by Clark Spencer Larsen, J. Nutr. 133: 3893S.3897S, 2003.) This was probably related to hunting and meat consumption.

But then, sometime later, there was a spectacular series of extinctions of large mammals (such as the wooly mammoth, saber-toothed cats, American lion, etc.), which went hand-in-hand with human migrations over the globe.  Further along, about 10,000 years BP, there was a food crisis of some sort because all the easy animals to hunt were essentially gone.  The book The Food Crisis in Prehistory, by Mark Nathan Cohen, postulates that it was population pressure that was the motive force behind the development of agriculture.  Overhunting not only killed off the big animals, it also forced humans to find another source of food.

Scientists debate the outline I have presented above. But it seems likely to me that this is pretty much correct, and that humans were responsible for these megafaunal extinctions through overhunting.  Even though our genetic makeup hasn’t changed that much in the last 10,000 years, or the last million years for that matter, hunting very definitely did have an impact on human evolution.  We are a much different species today both in numbers (billions) and range (everywhere), due in no small part to hunting.  It’s not necessarily a good thing that we hunted these species to extinction, but it happened and it had an impact both on us and the world around us.  Furthermore, “homo sapiens” has been eating meat in substantial amounts throughout its existence during the past 200,000 years.

So I think that Freston’s comment that “humans are natural vegetarians” is correct if we go back far enough, say to 4 million years ago.  But we should keep in mind that this is well before when “homo sapiens” officially entered the scene, and at that point hunting was an already well-established behavior.

We would do best to tell the story as we find it, and resist the temptation to cite data piecemeal when it happens to support a predetermined narrative, even a narrative that we like. The emerging story, one of human meat-eating which causes massive and negative environmental changes even in prehistory, is one that in my mind supports the case for veganism even more strongly than the fact that our distant ancestors lived on fruits, nuts, and green leaves.