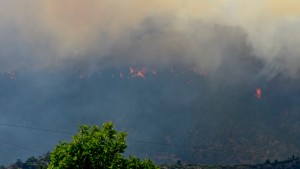 Politicians fiddle while Colorado burns.  We need to change our lifestyle if we want to avoid this fate or one like it. You can’t “grow the economy” without increasing fossil fuel use and without making climate change worse, not to mention the other serious problems which economic growth will make worse — resource depletion, soil erosion, species extinctions, and world hunger.  People need to understand this and learn to live with less.

There are many things for which I am grateful in this crisis.  I am glad that we have firefighters.  I am glad that President Obama has visited Colorado and glad that federal help is forthcoming in fighting the fire.  I am glad that Colorado is not Mexico, where the political system is even more dysfunctional, and tens of thousands of people have been gunned down in the streets in drug-related violence.

However, the fact is that the country and the planet faces a crisis of the first order about which virtually nothing is being said.  The closest President Obama came to mentioning it in Colorado Springs on Friday was when he said that “hopefully, out of this tragedy, some long-term planning occurs.”  Alas, he was almost certainly referring to better fire-management strategies, not climate change.

“Record heat,” “forest fires,” don’t you think there might be a connection here with “climate change”?  That’s what the scientists are saying: “more large forest fires linked to climate change,” was the headline in 2006; last year, it was “climate change and forest fires linked.” You wouldn’t know it from hearing political leaders talk about this.  To show that our political system is useless, we don’t even need to get into the other myths about “100 years of natural gas” and “plenty of oil”; nor do we need to mention that livestock agriculture is the most crucial cause of climate change, something even climate change activists are reluctant to admit. The fact that climate change is hardly even being mentioned in the face of the obvious fact of record temperatures is enough to prove this point.

This issue will probably be buried under hundreds of millions of dollars in meaningless campaign ads, as both parties cooperate in evading this issue. Yet this is much more important than all of the other so-called campaign issues. How will better immigration policies help a dying planet?  Perhaps there will be another planet to immigrate to?  How is health care reform of any sort going to help a dying planet?  Perhaps your insurance policy will cover it?

I don’t know who to blame, or whether to blame anyone for what is happening.  But the net result is destruction.  The Colorado wildfires are just the latest result.