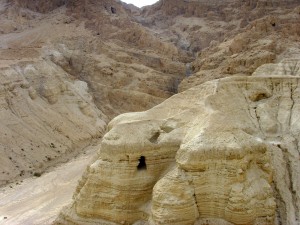 Here’s what James Tabor says about the connection between the Jesus movement and the Dead Sea Scrolls found at Qumran:

“The Jesus movement can best be described as a radical, nationalistic, anti-religious establishment, messianic, apocalyptic, baptizing, new covenant, wilderness-way movement–and that is precisely how the community behind the Dead Sea Scrolls can be described as well!”

So, is this right?  James Tabor isn’t the first to argue that Jesus and his movement were connected to the Dead Sea Scrolls.  But here, in a brief blog, is the most clearly written exposition of the argument yet.  So I am thankful to James Tabor for making this case in clear terms.  He’s basically right; there is a connection here and it does shed light on early Christianity.  However, it is also clear to me that the Jesus movement and the Dead Sea Scrolls community are very different groups.

The connection between the Dead Sea Scrolls and the classical Essenes just isn’t plausible, as I’ve indicated in a previous post.  There are too many discrepancies, and too few similarities. The Essenes were opposed to slavery, animal sacrifice, making of oaths, and war, critical points on which the Dead Sea Scrolls take an opposite position.

Jesus was certainly radical, and in some sense probably was apocalyptic as well.  Many scholars would dispute that Jesus was really “apocalyptic,” but because this term is so amorphous, it is easier just to concede the point and ask what, exactly, this all means.  The Tea Party is radical, I am radical, but am I a follower of the Tea Party?  Absolutely not.  There’s not even a question of “influence” here.  Radical in what direction?

The same logical applies to the term “apocalyptic.” Many modern fundamentalist Christians are “apocalyptic.” So am I; yet we are at opposite ends of the spectrum.  I’m expecting a crisis over resource depletion, peak oil, and climate change, which could destroy the planet.  Most fundamentalist Christians don’t see this at all, and are bent towards increasing resource depletion and climate change.

“Radical” and “apocalyptic” are not terms which describe a particular program.  They describe an awareness of the failure of “business as usual.” “Radical” and “apocalyptic” tells us more about the times we are living in, than about the particular programs which we propose to deal with these times.  This is as true today as it was in the first century.

I think this term, applied to the Jesus movement, is just wrong.  The Jesus movement certainly wasn’t militaristic.  What exactly do you do with all the pacifist passages in the gospels, like “love your enemies”?  The “heretics” were pacifist as well, including the Jewish Christian Ebionites and gnostic dualists like Marcion.  This just doesn’t fit into a “Zealot” perspective at all.

Conceivably, the Jesus movement could have been pacifist nationalists; they may have expected divine, nonviolent intervention to establish a new Israel.  But I don’t see that in any of the various Jewish Christian groupings (Ebionites, etc.) either.  You might be able to get some sort of “pacifist nationalism” out of the gospels.  But compare this with the straightforward expectations of “carnage” and the killing and enslavement of enemy populations in The War Scroll.

Like the “apocalyptic” label, the description of the Jesus movement as “anti-religious establishment,” or “new covenant,” tells us more about the times Jesus lived in that what his program or ideas were.  All our modern American political leaders are declaring that they are against the Washington establishment and even members of Congress are running against Congress (by which, of course, they mean those other members of Congress who are causing so much trouble).  The same sort of thing probably applied in the first century as well.

It’s true that the Dead Sea Scrolls and the Jesus movement both utilized baptism, but there are several problems.  First, Jesus and John used baptism as an alternative to animal sacrifice, whereas Qumran evidently used baptism as an adjunct to animal sacrifice.  Secondly, while technically the baptismal pools at Qumran had “flowing” water, the water was relatively stagnant compared to the way that the Jordan flows. Jewish Christianity stresses the importance of baptism in flowing water.  (I am not sure how significant this is, but I mention it as a problem.)  Third, baptism may have actually been a normative practice, not a dissident practice, at the time of Jesus.  The gospels say that when John baptized, “Jerusalem and all Judea and all the region about the Jordan” went out to him (Matthew 3:5).  This makes it sound as if baptism was something that appealed across sectarian boundaries. In that case, it wouldn’t be that distinctive.

Baptism appears to have been a widespread practice not associated with one particular school of thought. The real question may not be why Qumran and the Jesus movement took up baptism, but why later rabbinic Judaism did not.  It was dropped in later rabbinic Judaism, perhaps, only because by that time baptism was so strongly identified with Christianity.

This identification with the wilderness as a holy place, though, does not seem to be the property of any particular sect.  It seems to be an archetype of the collective Jewish unconscious which goes back at least a millennium.

These parallels are interesting, but they are in themselves not striking and do not prove that Jesus and the Dead Sea Scrolls movement were significantly related.  These parallels tell us about the times that Jesus and the Dead Sea Scrolls community lived in; they give evidence only that they were living in the same general area at roughly the same general time, which we pretty much knew already.

The Ambiguity of History

The Jesus movement (understood as Jewish Christianity) and the Dead Sea Scrolls community are parallel sectarian movements, but they are very different movements. We have plenty of contemporary evidence for how sectarianism works.  We have modern sectarian movements all around us, all competing for attention, and all gradually growing stronger, but all opposed.  That’s because our society is decaying.

Consider, for example, the Tea Party versus Occupy Wall Street, fundamentalist Christians versus Buddhists, vegans versus “Transition.”  All of these various contemporary movements reflect, in very different ways, the crisis of a decaying and corrupt society.  Our culture is based on looting and pillaging of nature (the burning of fossil fuels).  Our culture will collapse when we start having problems extracting all that wealth from nature — just as the Roman Empire began to collapse when it ran out of adjacent kingdoms to loot and pillage.

So when scholars look at groups like the Jesus movement, the Essenes of Philo, and the Qumran movement, and argue that they are all the same general movement, I have to smile.  I imagine some future historian, 2000 years from now (assuming historians are still around at that point), trying to look at The Lost Religion of Jesus and interpreting this in the context of the Tea Party, because we’re both apocalyptic, radical, and anti-establishment.  This would be obviously inappropriate, yet scholars seem to be bent on making the same general sort of mistake about ancient sectarian movements. Sure, there are parallels here, but you are going to need to do a lot more work to convince me that we are talking about the same group or even similar groups.

Judaism could have headed in any of several very divergent paths had history taken a different course.  Imagine a world in which cooler heads prevail, and there is no Jewish revolt against Rome.  Or at the other extreme, imagine a world in which the great Jewish revolt of the year 66 actually succeeds.  Early in the first century, the Essenes of Philo, the Dead Sea Scrolls community, and the Jesus movement described three distinct and improbable, but not yet impossible, paths for Judaism to take.

2 thoughts on “The Jesus movement and the Dead Sea Scrolls”