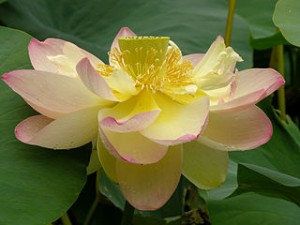 The first precept of Buddhism is variously cited as “abstaining from taking life,” “not taking the life of any sentient creature,” or “not killing.” Buddhist groups seem to agree that the life which we are not to kill includes animals and even insects.  So the first precept clearly implies (at least) vegetarianism.

Of course, we shouldn’t judge a religion only by its adherents.  Christian nations, despite Jesus’ admonition to “love your enemies,” are the most warlike on earth.  Moreover, there are notable Buddhists who have spoken up for vegetarianism, such as the late Philip Roshi Kapleau, who wrote To Cherish All Life (British title: A Buddhist Case for Vegetarianism), in which he vigorously puts forward the case for vegetarianism and is quite critical of spiritual teachers who continue to eat meat.

But where, today, is the successor to Kapleau?  Where is someone who will state the obvious?  This whole problem is astounding to me historically, ethically, and practically.

Historically, it doesn’t make sense to say that the Buddha was not a vegetarian. In addition to the first precept, basic doctrines such rebirth and karma reinforce vegetarianism. Other ancient believers in reincarnation, such as Pythagoras and the Hindus, also were favorably disposed towards vegetarianism.  It is telling that most non-Buddhists, when they hear of the first precept, assume that this means that Buddhists must be vegetarian. They are then very surprised to find that some Buddhists not only eat meat but don’t feel especially apologetic about it.

The obvious question is, why is this surprising? Looking at the situation historically and critically, it is clear that the earlier tradition was vegetarianism and that this was later modified.  Semantic arguments that it is allowable to eat meat if the animal was not specifically killed for you (a commonly cited “teaching” of the Buddha), do not make sense unless you are already operating within the assumption of vegetarianism. They are designed to “explain away” the obvious vegetarian implications.

Ethically, why should we kill animals?  How is this compatible with a religion of compassion? Kate Lawrence has explored the first precept (and other Buddhist teachings) in relationship to Buddhist teachings in her book The Practical Peacemaker as well as an essay in Mindfulness in the Marketplace.  Not only does eating meat violate the first precept against killing, it also violates the second precept (against stealing) and the fifth precept (against intoxicants), as well as the intent of the injunction about “right livelihood.” Eating meat steals animals’ body parts and steals from the poor.  Given all the evidence we have from nutrition science, meat is also  a very toxic substance.  Trading in animals for slaughter is one of the forbidden occupations, yet how is this injunction honored if we, by our purchases, reward or require others to engage in this occupation?

Some argue that the first precept is impossible to follow because it applies to insects as well as animals.  No one, except a few Jain monks, observes that.  Since we can’t observe it anyway, why should we so picky about the first precept?  This objection doesn’t make sense.  If we can’t fully observe the first precept, the obvious conclusion would be that we should observe it as much as possible. In America, at least, that clearly means a vegetarian lifestyle.

The most interesting problem, though, centers around the Buddhist sitting practice, or “meditation.”  Many Buddhists meditate and hold that the Buddha’s method is unexcelled.  But why, then, doesn’t meditation lead to sufficient compassion for animals to engender vegetarianism?  Many Buddhist leaders are not vegetarian, including many who meditate a lot more than I do.

Why hasn’t the meditation practice of these teachers led to vegetarianism?  And why are many non-Buddhists who are very secular and never meditate, nevertheless led to veganism and a life of compassion?  There is a saying, “by their fruits you shall know them.”  The meaning, as I take it, is that you can judge teachers by their actions.  Why shouldn’t we assume that if they are meditating, but not vegetarian, that their methods are defective?

This is a disturbing argument to me.  It is disturbing on several levels. I have come to believe that mindfulness, however it is practiced (and I try to carry this out myself), is an important part of a spiritual life, that we can endlessly expand.  Yet here is a case where mindfulness seemingly has failed. It is not just that there are some hypocritical religious teachers who have gone astray; we knew that already.  It is disturbing because there are sincere religious teachers who have gone astray.  That, to me, is even more disturbing.  It has become, in a manner of speaking, my own personal koan.

There are some possible answers.  First of all, in America most likely Buddhism has a greater percentage of vegetarians than is the case for other religions like Christianity.  The main religion which might compete with Buddhism in this regard would be Hinduism, which also has a strong emphasis on meditation and vegetarianism.  So meditation, however imperfectly practiced, may increase the tendency to be vegetarian even if it does not lead to vegetarianism every time.

Moreover, the Buddha was also observing the precepts, including the first, and it was the Buddha’s vegetarianism and other insights into cherishing all life that preceded his enlightenment.  Meditation purely by itself isn’t enough.  It’s similar to the debate on “faith” versus “works” in Christianity; you need both.

5 thoughts on “What is it with Buddhists and the First Precept?”