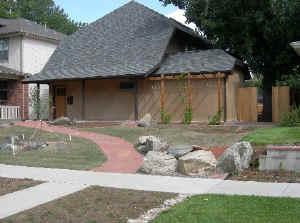 The “passive house” concept is taking off.  This is a new way of building homes that reduces the energy required for their maintenance by an amazing 90% from the standard construction.  This way of constructing buildings is essential if we are to deal with such challenges as climate change and resource depletion.

The design consists of very well insulated walls and roof, south-facing windows, tight sealing, ventilation system, avoiding thermal bridging, and a bunch of other technical-sounding stuff.  If you really want to get into the nitty-gritty (or make a living building these kinds of homes!), there’s a national conference in Denver later this month.

Lance Wright, who actually built his own house (pictured above) inspired by the passive house concept, says that after the Passive House Institute in the U. S. split off from the international group, some other groups are now trying to promote the passive house concept as well.  Not all of them are equally helpful, however.  Here is his explanation.

A Brief History:
Passive House in the U.S.

My name is Lance Wright, I am a “Passive House Consultant”, trained and “Certified” by the Passive House Institute, US (PHIUS).  PHIUS is based in Illinois, (USA) and began training “Consultants” in 2008, I was in that first class.  In the beginning PHIUS was associated with the Passive House Institute, International (PHI) which insisted that PHIUS follow their strict “International” guidelines.  There was no English language textbook which meant that PHIUS had to translate all educational material and PHI required that all measurements and calculations be in metric.  And last, but not least, PHI insisted that the final exam had to be shipped to Germany to be graded by PHI.

Despite all of these hurdles, PHIUS (a non-profit, 501(c)3 corporation, BTW) managed to train people and get a few buildings built.  To date PHIUS has trained over 500 people and currently lists 297 Certified Passive House Consultants (CPHC) on its web site (www.passivehouse.us).  PHIUS also lists 31 Certified or Pre-Certified buildings under construction or completed on that same web site.  Officials at PHIUS estimate that they have over one hundred other buildings “in the pipeline” in various stages of design.

The main reason I wrote this “Brief History” of Passive House in the U.S. is to document that PHIUS is the largest and best established PH Organization in North America.  I feel the need to point that out, because things have recently gotten complicated.  In August of last year, PHI and PHIUS split up.  PHIUS basically declared its Independence and PHI broke off relations and continued to try to force the square peg of the North American building community into the round hole of its Euro-centric International Practices.

A third group, the Passive House Academy (based in Ireland), started teaching PH training classes in the Northeast U. S. sometime near the end of 2010 or in early 2011.  The Passive House Academy is a for-profit corporation that is following an aggressive marketing plan and is now teaching on both coasts and Chicago.  They are affiliated with PHI and have a large e-mail list which they are using well.

Wait, that is not the end of it.  Last week a group, apparently based in the Northwest U. S., sent out a press release announcing the formation of yet another PH organization.  They call themselves the American Passive House Network and stated that they wanted to gather nationwide PH building experience and share it for the greater benefit of all.

And, like most Americans, I almost forgot the Passive House group in Canada!  The Canadian Passive House Institute teaches PH training classes only in Canada, so far.

The fact is that the simple times are over.  Mirroring the diverse climate, the North American Passive House community is no longer monolithic.  Awareness of the Passive House energy standard has started to break through into the public consciousness and there is soon going to be an explosion of interest and activity.  Of course, this is what we wanted to happen, but once Passive House truly goes mainstream it will be virtually impossible for the non-professional to keep up with all of the new technology, groups, and people that the boom will produce.  It will, in a short time, seem that EVERYONE is a PH practitioner and we all will have to work hard to guard against scams and green-washing.  The future will be challenging, but we are beginning to change the paradigm and, with hard work and vigilance, everyone WILL BE a Passive House advocate before we get the chance to catch our breath!