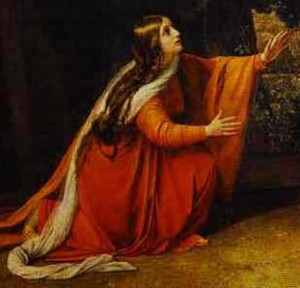 Karen King, a Harvard Divinity School scholar whom I greatly respect, has submitted a draft of an article for the Harvard Theological Review discussing a Coptic gospel fragment which refers to Jesus having a wife.  This is now all over the internet, it was on the PBS Newshour last night, and even made the front page of the Denver Post and other papers.  The Smithsonian Channel is planning a special program. It’s big news!

The Gospel of Jesus’ Wife (as King has named it) is very short and very fragmentary.  The critical phrase is, “Jesus said, ‘My wife . . .'”  Yes, that’s it; it’s not even a complete sentence.  By combining lines 4 and 5, you might get this: “Jesus said, ‘My wife . . . she will be able to be my disciple'”; but there’s no assurance of what was said in the ellipsis between “My wife” and “she will be able.”  And the whole “gospel,” from beginning to end, is just eight lines.

As Karen King herself pointed out, even if this fragment really is an early gospel (which hasn’t been conclusively demonstrated), it doesn’t prove that Jesus was married.  All that it shows is that some people believed that Jesus was married.  In fact, these are not even people who lived around the time of Jesus; King thinks that the fragment is a fourth-century copy of something originally written perhaps in the late second century.  This would put the fragment well over a century after Jesus.

So what does this mean?  King rightly points out that not only is the earliest known claim that Jesus was married (namely, this text) relatively late, the earliest known claim that Jesus was not married also is late.  Of course it’s possible that there are lost manuscripts which claimed that Jesus was (or was not) married. But it is interesting that these two competing claims seem to emerge relatively late in the day and about the same time, over a century after Jesus had left the earth.

Presumably the first disciples of Jesus and most of his followers in apostolic times knew whether he was married or not.  Presumably, also, his own relatives knew.  But suddenly, late in the second century, people start worrying about whether Jesus was married.  This is the most interesting thought which this discovery raises: for a long time there are no assertions either way (as far as we know); then, late in the second century, the matter starts being debated.

What? The later relatives of Jesus were still around in the second century, when this text was written. Why didn’t these people, like, just ask Jesus’ relatives whether he had been married or not?  What this late second century “debate” indicates to me is that the second century gentile church was totally separated from the family of Jesus.

The problem is that the family of Jesus was associated with the heretics, specifically the Jewish Christian Ebionites.  The Ebionites, who counted the relatives of Jesus among their number, should have been in a position to know.  As Jews following the true prophet Jesus, they were closer linguistically, ethnically, and geographically to the primitive church in Jerusalem.

The canonical gospels already are saying testy things about Jesus’ relatives and others close to him — for example, that they didn’t understand simple parables, that Jesus was rejected by his own family, and so forth.  This reflects the fact that the relatives of Jesus were considered “heretics” (or at least, unreliable) from a fairly early stage.

There is no indication what, historically, the Ebionites thought about Jesus’ marriage, though they clearly regarded him as human (Homilies 16.15).  There would be an obvious motive for the orthodox to deny that Jesus formed his own family by marrying; it further belittles the importance of Jesus’ relatives. They could point out that Jesus wasn’t even interested in such worldly things as marriage.

While the question of whether Jesus was actually married has some interest, the real story is the separation of the gentile Christian church from its primitive roots.  The whole “was Jesus married?” debate has a history of its own.  The early manuscript evidence (aside from the current discovery) is evenly divided, fragmentary, and circumstantial.  Nowhere is it explicitly stated one way or the other that Jesus had a wife.  On the one hand, the Gospel of Philip says that Jesus frequently kissed Mary, and Mary Magdalene is the first witness of Jesus’ resurrection in the canonical gospels. On the other hand, Jesus sometimes talks about hating one’s family (e. g., Luke 14:26), and says “Foxes have holes, and the birds of the air have nests, but the Son of Man has nowhere to lay his head” (Matthew 8:20).  You could slice and dice the evidence either way.  The best evidence — if it is authentic — would be the Talpiot tomb, which if it is the tomb of the historical Jesus, indicates that Jesus had a son.

People interested in the historical questions surrounding this would do well to look at the Harvard Divinity School web site, which has links to a video of Karen King talking about this, as well as a link to the actual paper (it’s still a draft; there are several typos in it).  Karen King is best known to me as the author of What is Gnosticism? which I found quite insightful.  I would also suggest James Tabor’s blog — he has already written on this news, and is one of the few scholars around who understands the tremendous problem that Jewish Christianity poses not only for historical Jesus scholarship, but for Christianity itself.

Maybe this revelation will be one more push towards the realization that modern Christianity has lost touch with the original religion of Jesus, and the reconstitution of Christianity closer to the lines that Jesus actually intended.

2 thoughts on “This Just In: Jesus was Married!”