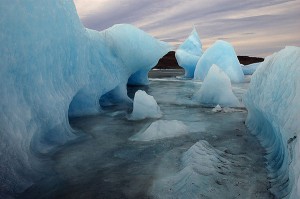 Chasing Ice is a just-released documentary which makes climate change both undeniable and vivid. James Balog, a National Geographic photographer who was once a climate change skeptic, sets out to photograph evidence of the effects of climate change. He goes to the far north with a team of fellow adventurers (dubbed the “Extreme Ice Survey”), where he sets up cameras in really hard-to-get-to places to take time-lapse photos of glaciers and ice caps, so that we can find out just what is going on.

We have come a long way since the movie An Inconvenient Truth. There is still a startling lack of public awareness of the urgency of climate change — in the recent presidential debates, climate change was not even mentioned.  For many people, Chasing Ice will be far more convincing than hours of lectures, facts, and statistics. 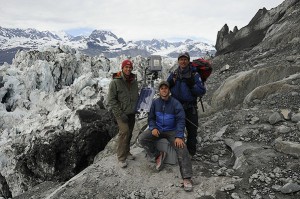 For Balog and his Extreme Ice Survey team, just getting there and setting up the cameras is an adventure in itself.  All does not go well at first.  A multitude of technical problems overwhelms initial attempts, which turn out to be an almost complete failure.  On top of that, Balog has to cope with several physical problems.  There are several tense moments when you wonder if Balog is about to slip into a spectacular ice abyss.

But the results he comes back with are truly stunning.  They discover that in just a matter of months, the landscape can be totally and permanently altered.  In addition to the time-lapse photography, they also get some real-time photos of “calving” of glaciers which are even more amazing.  We saw a pre-release screening of the movie with a couple of the Extreme Ice Survey team members present.  The movie got applause at the end and there was a question-and-answer session afterwards with these team members.

My only minor criticism is that the movie does not offer any ideas on what a world without climate change would look like, in terms of the way humans live.  In the question and answer session afterwards, people asked “what can we do?” in different ways.  They got a fairly bland response about building more renewable energy resources.  One woman asked a question about population; I asked a question about livestock agriculture and climate change (citing the Goodland and Anhang article in WorldWatch).  The team members turned the questions aside with nondescript and inoffensive responses.  I specifically asked if they or anyone they knew had heard of the WorldWatch article; in reply, they didn’t answer the question, so probably they hadn’t.

It’s hard to convince people that climate change is a serious issue. This movie addresses part of the reason for that: we need better movies. This movie is well done, both in concept and execution. Thank you. But another part of the reason for this is that no one really has a good idea of what a “post climate change” world would look like.  Wind turbines everywhere, or what?  Will we have electric cars and eat grass-fed steak? A lot of people, including evidently the people who made this film, are just assuming that it’s a political problem.  The solutions are known, we just need to apply sufficient pressure so that the political leaders will do something.

It’s not so simple. No one really knows what this post climate change world would look like or how to get there. Yes, wind turbines are part of the solution, but those who think that we can just throw up wind turbines everywhere and then continue living pretty much as we are today, are in for a rude surprise. Two much bigger parts of a post climate change world are the growth of veganism and learning to live with less. Until we can visualize the needed approach, we won’t be able to see the problem, either.