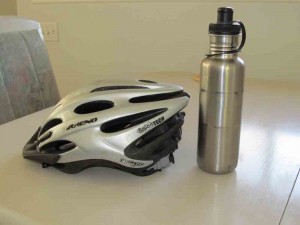 It appears that a vegan diet strongly protects you against strokes. Nevertheless, a stroke could happen even to a long-term vegan, and it happened to me. However, it was quite mild (as strokes go), I have not changed my diet, and I recovered completely. I therefore offer this essay as a kind of “man bites dog” story as well as a warning that vegans should be aware that as we get older stuff tends to happen more — just not as much as it does to nonvegans. (And, activists, watch those stress levels!) For general information about nutrition and disease, including information about strokes, I suggest the site NutritionFacts.org, which has informative videos such as “How to Prevent a Stroke” and “Preventing Strokes with Diet.”

Around noon on December 5, 2012, as I was bicycling back from the post office, I noticed that my bicycle helmet seemed unusually tight. Once I got home and came inside, I took off my helmet and discovered that I had a really bad headache. It was so intense that after a few minutes, Kate and I decided that a trip to the emergency room was in order. The hospital found bleeding in my brain and I was admitted to the hospital; they kept me there for nine days, the first five in the Critical Care Unit. Once home, the recovery process took almost six months, during much of which time I was pretty much incapacitated. But I never experienced any loss of overt bodily functions such as speech, sight, or motor movement.

I had suffered a mild stroke. There was nothing especially unusual about my experience, except for the fact that I am a vegan. Between then and now I have learned quite a bit about strokes and stroke treatment that I didn’t know before, which I will pass along to you in this blog.

So what caused this stroke, and what good is a healthy vegan diet if it didn’t protect me against this event?

There are two kinds of strokes, ischemic strokes and hemorrhagic strokes. Ischemic strokes are the overwhelming majority (about 85%). The person has atherosclerosis, a clot breaks off and obstructs an artery to their brain. The brain cells that depend on this artery for blood therefore die. This is the type of stroke against which long-time vegans on a low-fat whole foods diet are strongly protected.

Hemorrhagic strokes are less frequent and result from bleeding in the brain. This is the kind of stroke that Dr. Jill Bolte, the author of My Stroke of Insight had; in her case it was due to an aneurysm breaking. Aneurysms are distortions or “ballooning” of the vessel wall which can occur when the wall is weakened in some way, either because of genetics or because of high blood pressure (or some combination of other factors).

But in my case, no aneurysm was found. The doctors thoroughly examined me and did two angiograms on two successive days (both requiring full anaesthesia). The good news was that my arteries were quite clean; there was no atherosclerosis. More good news was that I had no aneurysm, nor any arterial tear or rip. By process of elimination, therefore, they concluded that my bleeding was most likely due to a break in a vein or capillary. So my diagnosis was highly unusual; it was a type of stroke seen in less than 1% of all cases, and unlikely to recur. On a scale of 1 to 5, with 1 being the least serious, my case was a 1.

So, was my veganism, or anything else I did, a risk factor for what happened? I considered three factors.

One risk factor which didn’t have anything to do directly with veganism, was stress. In the weeks prior to my cerebral hemorrhage, I was in an unusually stressful situation involving a court case and some local vegan activists.

There was actually one significant downside to my veganism. Clean arteries aren’t a risk factor for a stroke itself (in fact makes them substantially less likely), but once you have a stroke for some reason, clean arteries can actually be a bit of a problem. The hospital may need to keep you under observation a bit longer. One secondary risk, unlikely but serious if it does occur, for people suffering from cerebral hemorrhages is “vasospasm.” The hemorrhage can irritate the arteries in the brain, causing the blood vessels to clamp down and restrict blood flow to a dangerous level.  If it does happen, it usually occurs within a week or two of the initial event. Our doctor said that the risk of vasospasm is actually greater among those with “clean” arteries (e. g., me) than with those whose arteries are “hardened.” He didn’t give any statistics, but intuitively it seems to make sense; an artery without much flexibility is not going to be able to “spasm” as much. Obviously, though, clean arteries are a net benefit, because they enable you to drastically reduce your risk of the most common cause of strokes in the first place.

One informed source told me that vitamin B-12 deficiency (and resultant high homocysteine levels) could contribute to a weakness in the arterial walls. (Upon searching, I found one technical discussion of this possibility in the journal Stroke from 2009.) Since vegans were more likely to suffer from vitamin B-12 deficiency, even though they would have a lesser likelihood of suffering from the more common kind of stroke (due to occlusion of an artery in the brain), they might be at greater risk for a hemorrhagic type of stroke.

At least one vegan seems to have suffered a stroke due to B-12 deficiencies. She is vegan and macrobiotic. In 1998 she suffered a stroke that was the result of an aneurysm (unlike my own case). It could have been fatal, but she survived. In the hospital, doctors told her that she had very low B-12 levels that had weakened her arteries. While this is evidence is anecdotal, it seems very consonant with everything else I have learned on the subject.

When I heard of this possibility, I decided to get my B-12 levels tested. Unfortunately, my insurance provider (Kaiser Permanente) would only pay for an older, inaccurate B-12 test that doesn’t distinguish between B-12 analogues (false B-12) in the bloodstream and true B-12. Fortunately, there is now a much more accurate test, urinary methylmalonic acid (referred to as “uMMA”). The uMMA test doesn’t test B-12 directly, but rather the breakdown products which B-12 is supposed to clear from the bloodstream (and as far as we know, only B-12 is able to do this). Testing for the presence of this bad stuff (the harmful methylmalonic acid) provides a much more accurate test of the presence of B-12, a test which can pick up a B-12 deficiency much sooner than other tests — within just a week or two of developing a B-12 deficiency. It might take years or decades before other symptoms of B-12 deficiency would manifest (atherosclerosis, nerve damage, etc.).

I got the uMMA test and my B-12 levels were determined to be healthy. I had been taking B-12 off and on since the late 1980’s, and religiously since the year 2000, so in my mind this was more a test of my pills than a test of my B-12 habits. But B-12 pills are not perfect, so it might not be a bad idea to get tested every now and then. So, vegans, beware: take those B-12 supplements.

I was annoyed at Kaiser because they would approve the inaccurate blood test of B-12 levels (which will often give false results), but would not approve the more accurate uMMA test, for which I had to shell out $150. On the other hand, this annoyance was somewhat ameliorated by the thought that Kaiser had covered those nine days in the hospital, which would have wiped us out financially!

Considering that this was such a mild stroke and the prognosis was so good, the recovery process seemed truly glacial. I could tell I was getting better, but progress was really slow. One month after the stroke, I experienced ongoing headaches, difficulty sleeping, lack of motivation, and a constant feeling of “being in a fog.”

She prescribed some medication which did help with one problem: I was at last able to get a good night’s sleep. It also diminished the severity of the headaches. However, constant headaches were still a problem; I still felt like my mind was in a fog, I still didn’t feel like doing anything, and I just wasn’t very sharp. Oddly enough, the most effective pain relief for my headaches was not Tylenol but caffeine, so I started drinking about 4 cups of tea (caffeinated) per day.

About two months out, I consulted someone else, a neurofeedback specialist. She said that my symptoms alone indicated a brain injury of some sort, and that the whole question of what constitutes a “brain injury” was somewhat semantic. She did some tests and diagnosed me with attention deficit disorder (ADD). She said that ADD was very common as a result of head injuries (of which stroke is one obvious example) and complained that many doctors weren’t aware of this type of problem.

Neurofeedback therapy deserves a separate blog by itself, but here is a rough description. It involves looking at a computer screen while some wires are attached to your head. When your brain manifests the “good” brain activity (e. g., brain waves in the 12-15 hertz range for the frontal lobes, indicating a relaxed but wakeful and alert state), the computer beeps and you (and your brain) knows that you’re doing well. Thus you are “rewarded” (the feedback) for manifesting certain brain states. It’s more complex than that, there is a diagnosis and evaluation first, but that’s a quick introduction.

The results from neurofeedback were very quick in one respect: my ADD went away after just 2 or 3 sessions. My motivation was back and my ability to think and concentrate returned. In fact, I was actually better than I was before the stroke—I probably had a slight case of ADD even before my stroke. The headaches were more of a problem and continued for some time longer, but I am now off all prescription medications and the headaches have now largely disappeared. I cannot absolutely be sure that the headaches would not have gone away of their own accord anyway, but I believe that their disappearance was due to neurofeedback as well.

None of my other doctors had even noticed that I suffered from ADD in the first place. If I was still suffering from ADD, I can assure you that I would likely not be writing this blog right now. Because of the dramatic disappearance of my ADD, and because the original diagnosis in the hospital was a mild stroke, I am inclined to say that yes, I had suffered a brain injury as a result of my cerebral hemorrhage—not an obvious one like inability to speak or paralysis on one side of the body, but a palpable injury nevertheless. Therefore, I am classifying this as a mild stroke.

So this is what I’ve learned from my experiences:

1. Even long-time vegans CAN suffer a stroke, though obviously your chances of avoiding stroke are much greater for vegans than with nonvegans.

2. Avoid stress, and take your vitamin B-12 pills.

3. Neurofeedback should be investigated as a therapy for head injuries.

Much of the information on strokes in this blog is taken from “Understanding Subarachnoid Hemorrhage and Cerebral Aneurysm,” a 22-page booklet published by the Swedish Medical Center / Stroke Center (no date).

21 thoughts on “Vegans and Strokes”