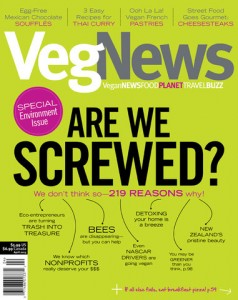 The April 2013 issue of VegNews, their environmental issue, asks on the cover: “Are We Screwed?” The cover quickly adds: “We don’t think so—219 reasons why!”

I don’t see any list of 219 reasons, but the ones listed on the cover are definitely not convincing to anyone who understands the seriousness of climate change and resource depletion. The VegNews cover advertises, “Eco-entrepreneurs are turning trash into treasure”; “New Zealand’s pristine beauty,” “detoxing your home is a breeze,” and some others (see photo). Inside, there’s even an article on travel to New Zealand!

I appreciate that VegNews needs to put the most positive spin it can on our environmental crisis. No one is going to sell a stack of magazines if they come out with an issue announcing on the cover, “We’re Doomed! 219 reasons why our situation is totally hopeless.” But this “happy face” approach is part of the problem, not part of the solution. A better approach would be something like, “Are We Screwed? We may be in big trouble, but vegans can help!”

Here is what VegNews, and the vegan community generally, is missing. We have a problem of “limits to growth.” Oil prices have shot up by about 800% since 1999; and in spite of huge oil spills, fracking, and a failed war in Iraq, we still can’t pump enough. We have huge levels of private and public debt not just in the U. S., but all over the world, because energy is so expensive.

On top of that, we have climate change, with carbon dioxide levels at over 400 ppm and methane levels increasing even faster during the past decades. China’s economic boom, the only real bright spot in the economic picture, features a massive run-up in the use of coal (the dirtiest fossil fuel of them all). Fossil fuels and methane are creating a runaway greenhouse effect that will make the planet literally uninhabitable for humans. We have a finite planet, and our economy runs on fossil fuels.

Everyone is assuming that when we finally face up to climate change and peak oil, that renewables will ride to the rescue. This isn’t going to happen, at least not in the way that people imagine. Here are some specifics:

1. The EROEI (energy return on energy invested) of most renewables is considerably less than the historic EROEI of fossil fuels such as coal and oil. For the past 80 years, it has not taken a whole lot of energy to drill oil wells or dig coal, at least relative to the amount of energy in the coal and oil. The energy output to energy input has been on the order of 30:1, 50:1, or even 100:1. But solar and wind, when all things are considered, will likely have an EROEI on the order of 5:1 to 20:1. Renewable energy will, of necessity, be more expensive.

2. Solar and wind combined still produce less than 1% of our entire energy consumption. To get from 1% to anywhere close to 100% of our current energy consumption will take decades, if indeed it can even be accomplished.

4. Even if the political will to begin such a project existed, it would take a major dent out of an economy that is awash in debt, because it would divert a large percentage of the energy from our consumer economy into infrastructure building for decades.

5. There are a lot of technical kinks with the renewable infrastructure. Solar and wind are intermittent: what do you do when the wind doesn’t blow and the sun doesn’t shine? Manufacture of many renewables require rare earth metals (“goodbye oil, hello neodymium”), so shifting to renewables is just shifting from reliance on one set of finite resources to another set of finite resources. Issues with car batteries (too heavy, too expensive), recharging times (too long), and energy storage generally (how exactly will we store energy?), have not been worked out.

The scale of converting to a renewable economy is just staggering. It would require the effort not just of one “Manhattan Project,” but more like 10 or 100 “Manhattan Projects” and attendant public and governmental support. The drain on the economy will be huge, massive sacrifices and cooperation will be necessary, and we will all be poorer. This is why none of our political leaders are talking seriously about it.

Don’t get me wrong—we need to ramp up renewables anyway. The reason this hasn’t happened is because none of our political leaders have the courage to tell the public, “guess what, our economy is going to suffer if we build all those wind turbines and solar panels, but we need to do it anyway, and fast.” So our political leaders are content with muttering platitudes, blaming the other party, and frittering away valuable time.

Yes, veganism will help. Veganism helps because veganism requires only a fraction of the agricultural resources that a meat-oriented diet does, because cheap grain relies on cheap fossil fuels (and meat production relies on cheap grain), and because livestock agriculture has a huge role in climate change (producing about half of all greenhouse gases). Veganism is a necessary part of the solution, but our problems are deeper than that. Even if the world goes vegan, but we continue driving cars and overpopulating the planet, we’re not going to make it.

Even with everyone on board, building a renewable energy world will take decades and leave the entire world economically poorer than today. Contrary to the cheery travel recommendations of VegNews, almost none of us will be traveling to New Zealand. And, everyone is emphatically not on board. In fact, it is not clear that even VegNews is on board.

For political reasons, because of these needed sacrifices, the transition to renewables is unlikely to start soon. Because no one wants to face the issue, the world will just drift along until another major crisis hits. We may not be screwed just because the Republicans don’t get it, or even if the Democrats don’t get it—and they don’t.  But if the vegans don’t get it, we really are screwed.

3 thoughts on “Are We Screwed?”