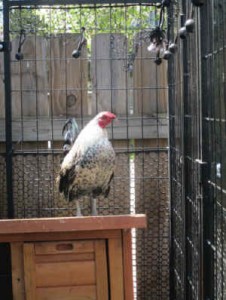 When I protested against the proposal to encourage backyard chickens in Denver two years ago, one of the questions I asked was “What do you think is going to happen when owners get roosters from hatcheries? Chicks are hard to sex, and ‘mistakes’ may not be evident until the chickens are six months old.” Most cities which allow backyard chickens (including Denver) allow hens but prohibit roosters.

Well, guess what! We now know the answer to this question, at least for Denver. They will be dumped at animal sanctuaries or at local animal shelters. The Denver Post did a story on the problem on June 22, profiling a Colorado shelter for roosters. It is nearly full already. The Post quoted Nicole Paul, of Denver Animal Care and Control, as saying “We get calls on roosters all the time.”

The Humane Society of the United States (HSUS) is taking notice; Paul Shapiro recently told NBC News that “many areas with legalized hen-keeping are experiencing more and more of these birds coming in when they’re no longer wanted.”  Tiffany Young, founder of a Seattle animal rescue group for ducks and chickens, blamed the influx on “hipster urban yuppie types” with romanticized notions of raising farm animals.  She stated that “there is not a sanctuary anywhere in the Northwest that is not at capacity or beyond it.” (I interviewed Tiffany in 2011 in researching this subject.)

The backyard chicken movement seems to have hit a high-water mark, as more and more problems with keeping livestock in the city appear. Some urban areas do legalize keeping backyard livestock, but other areas are resisting, modifying, or even rolling back laws to allow chickens. In Toronto at the beginning of 2012, the city council rejected an effort to legalize backyard chickens.  In Minneapolis, a law was passed so that chickens are viewed by the city as companion animals, and less like livestock; the key provision is that slaughter is prohibited. Oakland, California is successfully resisting  efforts to legalize backyard slaughter. Key among the reasons these cities are having second thoughts about backyard chickens are straightforward humane considerations; more and more chickens are being abandoned. There is, though, one good reason for getting backyard chickens: you want to keep some rescued chickens as pets.

So, we should applaud people at animal shelters, such as Danzig’s Roost in Colorado, who are responding to the problem by taking in abandoned roosters (who are illegal in Denver). But this excuses neither the Transition movement which pushed so hard locally to get the ordinance passed under the pretext of “sustainability,” nor Denver’s city representatives who created the problem in the first place by approving this badly thought out proposal.