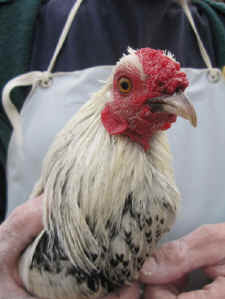 NOTE: this is the basic argument against city ordinances allowing backyard chickens, though obviously you could apply the same arguments to one’s personal decision to keep chickens.

The basic argument against backyard chickens is that allowing this practice creates an entirely new category of urban animal: an animal which may be routinely mistreated in a domestic urban environment.

This is not to say that most people who keep backyard chickens mistreat them. In fact, many consider their hens to be “pets” and will keep them even after they cease being “useful.” But this is not what the promoters of backyard livestock agriculture have in mind. They are promoting backyard livestock as a practical way to obtain food, namely, eggs and meat.

Some animal activists have backed the backyard chicken concept because backyard chickens are better treated than factory farmed chickens. (Because factory farmed animals are so badly treated, this is actually a pretty low standard.) This is true, but ignores the chief practical effect of the widespread practice of keeping backyard chickens. That effect will be increasing public acceptance of openly mistreating animals. At least with factory farms, they are trying to keep images of mistreated animals out of the public sphere — witness the controversy over the so-called “ag-gag” laws. Backyard chickens puts the mistreatment of animals right in, well, your back yard.

When you think about the world of domestic urban animals, what immediately springs to mind?  Overwhelmingly, dogs and cats. We don’t keep them because they are economically useful to us, but because we like them. When we hear about people from other cultures who accept the eating of dogs, we are horrified. We cannot be mollified with objections that all of these dogs, many of whom are going to be euthanized anyway, represent an economic source of animal protein.  Before backyard chickens, the urban environment was a sacred space for domestic animals.  Why shouldn’t we keep it that way?

If someone has a dog chained outside, shivering in misery in the dead of winter, it doesn’t take a radical animal rights activist to see that there is a problem. Someone is going to complain. Backyards should be “safe” zones for animals. People understand what a “pet” is and what mistreatment is. So when someone proposes that we need to allow backyard chickens, the first question to ask is, will they be considered as “pets”?

And that’s the key to understanding backyard chickens right there. In principle, there’s nothing wrong with keeping chickens as pets. There are some cities, such as Portland, Maine, where this is exactly the situation. What is problematic is introducing a second category of urban domestic animal: an animal, such as a chicken or a rabbit, which we may mistreat and possibly slaughter or dispose of for strictly economic reasons. Like, your hen has stopped laying eggs; most hens only lay eggs for a few years but live much longer.  Or, “we’d like to eat that rooster,” since roosters are illegal in most jurisdictions that allow backyard chickens, and frequently arrive from hatcheries by mistake (chicks are notoriously hard to sex).

There are plenty of other common objections to backyard livestock: smells, noise, disease, attraction of predators, and so on. The purchase of hens is inherently cruel, since most males are killed at the hatcheries, and often not humanely. Once you deliberately allow cruelty for economic reasons, these other adverse effects are no longer a moral problem, but merely an economic problem. Chickens being killed off by predators? Just a cost of doing business. Salmonella? A concern, but outweighed by the benefits of “organic sustainable eggs.”

Let’s not make cruelty acceptable in the popular mind.  If we protect the compassionate treatment of animals in the one realm of public awareness in which they currently enjoy respect — domestic urban environments — then we take an important step towards universal appreciation of the worth of all animals.