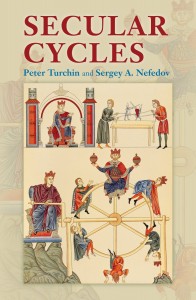 Secular Cycles is a phenomenal and important book.  It is clearly of interest to anyone who is concerned about things like the collapse of civilizations, and specifically the possible collapse of our civilization. Even though it’s new to me, it’s actually not new — it was published in 2009, and I’m only now finding out about it, and reading it!  I first heard of it through Gail Tverberg’s blog, “Our Finite World,” and I hope it finds a wide readership. But a word of warning: this book is not for the faint of heart. You’ve got to love the subject or you’ll never make it through the book. It doesn’t use a lot of technical terms, and is clearly written, just very academic.

There have been many other notable books written on collapse, such as Reinventing Collapse (Dmitri Orlov), Collapse (Jared Diamond), The Collapse of Complex Societies (Joseph Tainter), and Too Smart for Our Own Good (Craig Dilworth). They are all good and I recommend them all. However, there is one critical question which Turchin and Nefedov answer which the other books don’t: why can’t societies avoid collapse?  Can’t the ruling groups and the intellectuals see the collapse coming?  Why are they all so blind?

Tainter comes the closest to providing an explanation, but Tainter’s statements about “decreasing returns on investments in complexity” (or something like that) don’t really edify, they just perplex.  Tainter does state the problem accurately though: we have to wonder why societies collapse, since societies are problem-solving mechanisms. Why is it, then, that eventually they encounter problems which they can’t solve, even though the social structure is set up precisely to solve problems?

Turchin and Nefedov answer this question by describing an overall cycle for civilizations.  It is an interesting synthesis of thinkers such as Malthus and Marx, both of whom the authors reference. A typical “secular cycle” will last about 300 years or so. In the early stages of the cycle the civilization spreads and provides bounty for its subjects. But the result of this bounty is that, naturally, the standard of living rises and population increases. Eventually the population outruns their bounty and the condition of the masses declines (as Malthus suggests). There is a revolution or collapse and the elites are swept away and a new order put in its place (as Marx suggests). Because historically Marx detested Malthus, it is especially interesting to see their respective insights integrated into a single theory.

These societies can’t avert collapse due to the reaction of the elites to the declining condition of the masses, as population increases. Of course for us, and for historians, irreversibly declining wages in a society is a sign of imminent social decline.  But from the point of view of the elites in the society, it’s great news! If wages are declining, then it means that Mr. Capitalist (or the typical member of the ruling elite) can hire a lot more workers for less money and make even more profits hand over fist. So while the condition of the people at the bottom of the social heap declines, the elites are doing better than they ever have.  And they’re doing better precisely because wages are declining.  Of course they don’t want to change anything, so they don’t.

At this point, more and more people want to join the elite class. The fact that there is so much money to be made allows this to happen up to a point. But then it becomes apparent that the society has far too many elites.  On top of that, because of declining wages, it becomes harder for the government to raise money through collecting taxes. While the government falters, the elites then duke it out with each other for supremacy.  In this situation one of the elite groups may emerge in triumph, or sometimes a totally new elite group will come out on top (as in the Communist revolution in 1917).  But either way, the number of elites is sharply reduced. Then the secular cycle starts over, with a new elite class.

Turchin and Nefedov lay all of this out in their first and last chapters.  In between comes detailed and quantitative analysis of various civilizations. They’re quite honest, admitting that their theory doesn’t explain everything. They show how this pattern works in medieval and early modern England, medieval and early modern France, in the Roman Republic and then the later Roman Empire, and the Muscovy and Romanov dynasties in Russia.

There is nothing “deterministic” about this theory. In different civilizations, the results of the crisis and collapse can be completely different. In England and France, feudalism was swept away in the early modern period. But in Russia, it continued, only to result in an even more dramatic upheaval in 1917.

The authors show, using tables and graphs, how wages and population interact during a cycle.  They calculate wages based on the ability of the average wage to buy a staple such as bread.  As population rises, wages fall.  They calculate the increase of the elite class by looking at the number of peers, knights, gentry, and the like. At first the profits of the elites increase. Social instability follows as everyone scrambles to join the elite class, leading to a surplus of elites, and finally a crisis and a depression.

Just how academic is this book?  Let’s put it this way.  On a scale of 1 to 10, with “1” being light summer reading and “10” being totally for academics, this book is a “10.” The title is typical academia: it makes sense after reading the book, but doesn’t tell anyone not familiar with the basic layout of the book what’s in it.  A better title would have been something like: “Cycles of Growth and Collapse in Empires and Nations” (accurate but wordy) or perhaps “Why Civilizations Decline” (which is catchier).

So don’t expect a blow-by-blow account of the Wars of the Roses or Lenin and Trotsky’s agitation.  It’s pretty dry stuff, but precisely the repetitive and quantitative character of the book lend strength and credibility to its thesis.  In case someone doesn’t understand the cycle the first time through, they repeat it eight times in eight chapters, until it is perfectly predictable and we understand how to test its truth.  On the other hand, anyone who just wants the “bottom line” and is willing to trust their analysis can pretty much get that by reading the first and last chapters, which are the most interesting.

How well does the theory explain our contemporary American civilization?  If America started in 1775 then it is easy to imagine that American civilization would last just another 60 or so years.  America had an unusually long expansion period, arguably lasting until the 1990’s.  But now wages are stagnant or actually declining, the rich are getting richer, and the poor are getting poorer.  The government is losing revenue as its tax base dwindles. It’s all a consequence of natural resource shortages (as evidenced by, e. g., rising oil prices).

But is anything going to change?  Probably not, because the elites in this country have it so good.  As long as the elite class remains united, it will be impossible to change the government or its policies. So far, that seems to be holding, as Obama’s policies on many matters seem pretty much to mimic Bush’s (e. g. national security, fossil fuels). When the situation gets so bad that even the elites are beginning to see the problem and fight with each other, though, things could change in a big way.