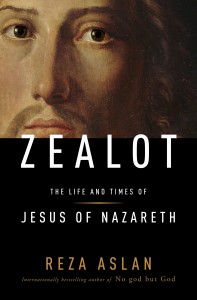 t’s a pleasure to encounter a book about Jesus that acknowledges the critical importance of Jesus’ disruption of the animal sacrifice business in the last week of his life; that acknowledges that Jesus was a Jew and tries to understand him in terms of the Jewish thought of the time; and that understands the historical importance of the shattering of the early church due to the dispute between Paul on the one hand, and James the brother of Jesus and the other disciples on the other.

Such a book is Reza Aslan’s Zealot: The Life and Times of Jesus of Nazareth (Random House, 2013).  This book is sufficiently interesting that I will devote two blogs to issues which it raises, even though there is no mention of vegetarianism or the Ebionites.  In this first one, we’ll look at the incident in the temple, to which Aslan attributes central importance.  In the second, we’ll look at the early Christian attitude towards war.

For Aslan, Jesus was a “zealot” in the original meaning of the term — someone full of zeal.  Aslan’s discussion of the primary example of Jesus’ zeal, the celebrated incident in the temple, is what gives Aslan’s views bite.  During the Passover, Jesus disrupts the animal sacrifice business in the temple (Matthew 21:12–13 and parallels).  Jesus “releases the sheep and cattle ready to be sold for sacrifice and breaks open the cages of the doves and pigeons, setting the birds to flight” (Zealot, p. 74).  This event is central to Jesus’ life, was the immediate cause of his arrest and crucifixion, and is undoubtedly historical, as Aslan rightly maintains (and as I discuss in The Lost Religion of Jesus).

Aslan states that Jesus was crucified because “his messianic aspirations threatened the occupation of Palestine, and his zealotry endangered the Temple authorities” (p. 79).  I agree totally with Aslan that Jesus’ zealotry endangered the Temple authorities. I am less convinced that his messianic aspirations had anything to do with it, mostly because the historical Jesus probably never had any messianic aspirations. In the gospels, Jesus is very reluctant to say that he is the Messiah and when directly asked, often answers equivocally, remains silent, or even orders his disciples to remain silent. Jesus was arrested and crucified not so much because he declared himself Messiah, but simply because his disruption of the temple was a threat to public order.

After Jesus was crucified, his followers continued to teach, preach, and heal, and advocate the same things that Jesus did.  But they don’t encounter any opposition from the Romans.  That’s because there was no repeat of Jesus’ disruption of the temple; they pursued their objectives by other means. Nor do the Pharisees object; they advocate tolerance of the new sect (Acts 5:34–39).

But the primitive church was a threat to the temple authorities, who opposed the Jesus movement with every means at their disposal.  Seven years after Jesus’ death (about 37 CE), the priests got a group of thugs (including Saul, Paul before his conversion) to attempt to kill James, the brother of Jesus and the leader of the early community (see Recognitions 1.70–71).  They failed; but then several decades later, in the year 62, the high priest actually succeeded in having James killed.

The story of the first attempt to kill James in 37 is strongly parallel to the story of Stephen in the New Testament.  In Acts, Stephen is accused of attacking the temple and the “customs which Moses delivered to us” (namely, the animal sacrifice cult).  It is a very similar story to that in Recognitions, but the names have been changed (Stephen instead of James) as well as the outcome (Stephen is killed, James is badly hurt but survives).

Aslan believes that Stephen was stoned because he declared Jesus to be the messianic “Son of Man.”  It’s true that Stephen says this, but Stephen’s vision and declaration (Acts 7:55–56) only occurs after the crowd is “enraged” and has pretty much already decided to stone him.  What enraged the crowd in the first place?  Stephen’s lengthy and rambling speech (Acts 7:2-54), in which he declares temple worship to be idolatry. “As your fathers did [in worshiping the golden calf in the desert], so do you” (Acts 7:51).  In this case it is not so much that Jesus is declared the Messiah (or the “Son of Man”) that stirs up the crowd, but the belief that temple worship is idolatry.  There is zeal here, to be sure, but it is zeal primarily directed against the idolatry of animal sacrifice.

In general, I am surprised that Aslan does not mention the Ebionites or Jewish Christianity, even though it would strengthen his case.  He does, interestingly, mention the Homilies and Recognitions, citing the celebrated incident in Recognitions 1 when Saul (Paul before his conversion) attacks James, the brother of the Jesus, in the middle of a debate in the temple.  But there is no mention of later Jewish Christianity.  Nor does he mention vegetarianism or the issue of eating meat sacrificed to pagan idols.

If you look at later Jewish Christianity (e. g., the Ebionites), it is clear that opposition to animal sacrifice and vegetarianism are  central to their beliefs.  Their gospel quotes Jesus as saying that “I have come to destroy the sacrifices”  (Panarion 30.16.5).  Is this zealous enough for Aslan? And Paul’s Jewish Christian opponents (at Romans 14, I Corinthians 8 – 10, and Galatians 2) had views very similar to the Ebionites; they also were opposed to animal sacrifices, and were vegetarian.  Paul complains that “the weak man eats only vegetables,” but counsels diplomacy with these early Christian vegetarians — “I will never eat meat again, lest it cause my [Christian] brother to stumble.”

James and Peter split from Paul precisely over the same fundamental issue that prompted Jesus to go into the temple to disrupt its business in the first place: opposition to animal sacrifice. The apostolic decree (Acts 15:29) states that it is wrong to eat animals sacrificed to idols, in stark contrast to Paul who defends the practice (I Corinthians 8 – 10). And remember that for the Jewish Christians, there is no difference between pagan animal sacrifice and the Jewish sacrifices in the temple — it’s all idolatry.

Jesus’ zealotry did very much endanger the temple authorities.  And as Aslan correctly notes: “That singular fact should color everything we read in the gospels.”

2 thoughts on “Was Jesus a Zealot? Part I”