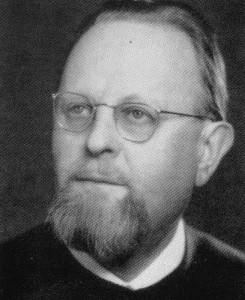 On encouragement of his Buddhist friend Hans Much, Professor of Medicine, he then studied theology.  Another challenge was posed by the question: Was the love of Buddha greater, and much more inclusive, than the compassion of Jesus? Surprisingly, the result of serious historic research was: no. Some of the  original teachings of the historical Jesus and first Christianity were radically different from the currently accepted doctrines of the churches.

His book: The  Churches’ Betrayal of  the Animals (first edition 1967, now being translated into English) became a bestseller. Thirty years after his death, it remains popular today.

Numerous articles of his were published in vegetarian magazines over many decades. He published a number of books on this and related subjects. He was a co-founder of the German Vegetarian Council (Deutscher Vegetarier-Rat) in 1956, Vice President of the International Vegetarian Union (IVU), and a life member of the British Vegan Society.

One other book of his has been translated into English so far and was published by Keith Akers: The Forgotten Beginnings of Creation and Christianity, 175 pages, Vegetarian Press, Denver, 1990.

[Read more about The Forgotten Beginnings of Creation and Christianity (in English) here.  You can buy a new copy from The American Vegan Society (p. 28 of their catalog), or order a used copy from Abebooks or from Amazon.]