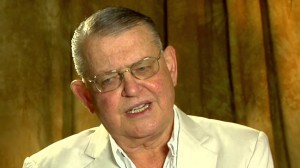 Dr. Robert Goodland died on December 28, 2013. He is best known as the lead author (with co-author Jeff Anhang) of “Livestock and Climate Change” (WorldWatch, November / December 2009), which made the case that livestock agriculture is responsible for over half of all human-caused greenhouse gas emissions.  He worked at the World Bank for over two decades and was sometimes referred to as “the conscience of the World Bank.”

I regret that I never was able to meet Robert Goodland, though our e-mail correspondence goes back over a decade. The closest I came to meeting him was in 2001, when after reading The Lost Religion of Jesus, Robert e-mailed me to propose that we get together for lunch in Washington, D. C. in October.  But fate intervened, and he had to travel to Asia and had to cancel.

Goodland was one of five co-authors of the book An Introduction to Ecological Economics (with Robert Costanza, Herman Daly, and two others), which I thought was brilliant.  When I queried him about this, he modestly pointed to Herman Daly and Joshua Farley’s book Ecological Economics (which I later also read) as “by far the best” book on the subject. I was also impressed by an essay he co-authored with David Pimentel, “Environmental Sustainability and Integrity in the Agricultural Sector,” (in the book Ecological Integrity, edited by Pimentel, Westra, and Noss, 2000) in which they proposed a “meat tax” — a tax on high-impact foods such as beef and dairy products.

It was his work in climate change that really stands out.  The 2009 WorldWatch article, which he co-authored with Jeff Anhang, argued that over half of all human-caused greenhouse gas emissions were due to livestock agriculture. This, of course, completely changes the nature of the climate change debate. At first this article was ridiculed, but as more and more people became aware of their reasons, this thesis gained increasing attention and acceptance all over the world.  Of course, when you talk of climate change everyone immediately thinks of cars, gasoline, and coal-fired electricity plants.  But what if, as Goodland and Anhang  ask, “the key actors in climate change are . . . cows, pigs, and chickens?” He continued working to expand and bolster this thesis almost until his death.  He will be sorely missed.

The website he co-founded, Chomping Climate Change, is the best source of online information and links to his work, including the famous WorldWatch article. His colleague Jeff Anhang discusses Robert Goodland here. Caryn Hartglass also interviewed him, and he spoke at the McDougall Advanced Study Weekend in September 2013. Another web site gives some of his recent more technical papers.