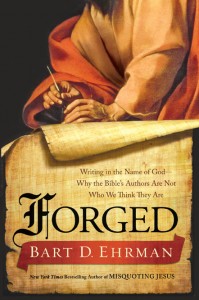 NOTE: this post discusses Nicholas Notovitch and Edmond Bordeaux Szekely. For G. J. R. Ouseley and “The Gospel of the Holy Twelve,” see the next post.

Why would anyone want to fabricate a gospel to prove that Jesus was a vegetarian, or anything else about Jesus? There is plenty of solid historical evidence that the message of Jesus was simple living, nonviolence, and vegetarianism, and that vegetarianism was a key idea of the movement which he headed. But Nicholas Notovitch and Edmond Bordeaux Szekely have not gone down the historical path; they have instead fabricated a gospel. Both of these gospels are sometimes innocently quoted by vegetarians to prove that Jesus went to India or that Jesus was a vegetarian. But neither of them constitutes real evidence about Jesus, or about anything else before the nineteenth century.

Forgeries in the name of religion are sometimes called “pious frauds.” Notovitch and Szekely are in distinguished company. The New Testament includes many books whose actual authors are other than they are claimed to be, such as Paul’s two “letters to Timothy,” which were not written by Paul.  Forgeries are in a different category altogether than channeled works such as Rev. Ouseley’s The Gospel of the Holy Twelve or Levi’s The Aquarian Gospel of Jesus Christ.  In the case of channeled works, the author is being straightforward: I had a dream or vision, in which God (or Anna Kingsford, or the Akashic Records) revealed these things. But in the case of forgeries, a manuscript is being advertised as being written by someone who in fact did not write it.

Nicolas Notovitch was a French explorer who, in the late nineteenth century, created a sensation by publishing a book called The Unknown Life of Jesus Christ. In it, Notovitch describes his travels to Tibet, where after breaking his leg, he was brought to a Tibetan Buddhist monastery in which he finds an unusual manuscript. It is about a Saint Issa, and Notovitch quickly realizes that Issa is simply Jesus. In this gospel, Issa travels to India and studies with the wise men in that country before returning to Israel and proclaiming his message and ministry. Notovitch’s book was first published in French in 1894 and created a sensation; it was then translated into English and various other European languages.

From a vegetarian point of view Notovitch’s book is not that helpful, even if you accept it as gospel. There is no explicit reference to vegetarianism, though Saint Issa does, at least, condemn animal sacrifices (at 7.14). Vegetarians might be tempted to use this gospel to prove that Jesus lived in India, though, where he presumably received some vegetarian influences.

In The Unknown Life of Jesus Christ, Saint Issa as a young man goes to India, Persia, and finally comes back to Israel.  In Israel, spies monitor him closely to find an excuse to have him arrested, but for three years they are unable to. Finally Issa is hauled before Pilate and condemned. He is buried, but Pilate sends his soldiers to get the body and bury it somewhere else, so the rumor spreads that his body has been removed by angels.

This sounds really fascinating. But, to make a long story short, the book was soon discredited. Several people traveled to Tibet to find out more at the monastery that Notovitch claimed to visit, and if possible have a peek at the manuscript, including an academic professor. The whole story unraveled. The chief lama said that not only was there no such manuscript, but they had never been visited by Notovitch or any other European during that period. Notovitch, confronted with the evidence, admitted that he had lied, and tried to put forward a different story, about finding fragments of the manuscript in different monasteries. But obviously Notovitch was discredited, and the controversy faded. Notovitch did, however, make quite a bit of money off his book.

However, Notovitch’s book remained available in libraries, and later researchers “discovered” the book without being aware of its earlier history, or of the fact that Notovitch had been discredited. Holger Kersten wrote Jesus Lived in India which is largely based on Notovitch’s book. Kersten is apparently completely oblivious to the history of the controversy over Notovitch’s work. Zombie-like, Notovitch’s hoax continued to have a life of its own even after it was discredited.

The Essene Gospel of Peace, written by Edmond Bordeaux Szekely, is the most famous modern example of a pious vegetarian fraud. It is still used by some today to “prove” that Jesus was a vegetarian. There is a clear vegetarian message.  Killing animals is allowed in self-defense, but not for food or for hides or tusks, or any other purpose (1981 edition, p. 34-35). There are also various other unusual themes in this gospel, promoting natural living, a theology of the Earth, and so forth.

It was first published in 1937, and then again in 1977, and has been reprinted since then. The title page of the 1981 edition announces it as “The Third Century Aramaic Manuscript and Old Slavonic Texts Compared, Edited, and Translated by Edmond Bordeaux Szekely.” (Inconsistently, though, the 1937 edition dates the manuscript to the first century.) Szekely claims to have found the manuscripts in various locations, including the Vatican Library, where he first encountered the manuscripts in 1923, and then also in the Royal Archives of the Hapsburgs in Vienna, and the monastery at Monte Cassino. Szekely identifies Hebrew, Aramaic, and Old Slavonic versions of the manuscript.

There are two key problems with Szekely’s story. The first is the contents of the manuscripts themselves. Yes, at least it’s vegetarian; but it also has a number of clearly modern “natural health” ideas. The second is Szekely’s own accounts of the manuscripts. His accounts are inconsistent, and most alarmingly, no one has documented anyone other than Szekely who even claims to have seen these manuscripts.

A number of people have written to the Vatican Library or the Hapsburg Archives; no one has found any such manuscript. The Monte Cassino monastery, as is well known, was destroyed during the Second World War. Conveniently, Szekely only revealed the existence of the manuscripts at Monte Cassino after the war, even though the first edition was published before the war. In the 1937 edition, Szekely dates the Aramaic to the first century; in the 1977 edition, to the third century. Well, how does he know, and why did he change his mind?  What, exactly, is going on here?  Are we just supposed to take his word for it, or what?

Looking at the manuscript, we see that it is full of modern “natural” health ideas. For example, Jesus is quoted as advocating enemas, complete with a graphic description of how to perform them! Here is a quote (from The Essene Gospel of Peace, Book I, 1981 edition):

Seek, therefore, a large trailing gourd, having a stalk the length of a man; take out its inwards and fill it with water from the river which the sun has warmed. Hang it upon the branch of a tree, and kneel upon the ground before the angel of water, and suffer the end of the stalk of the trailing gourd to enter your hinder parts, that the water may flow through all your bowels. (P. 16)

In fact, Jesus says that unless you perform these enemas, you cannot come into God’s presence:

No man may come before the face of God, whom the angel of water lets not pass (p. 14).

He also advocates a raw-foods diet:

“Master, where is the fire of life?” asked some of them.

“In you, in your blood, and in your bodies.”

“And the fire of death?”

“It is the fire which blazes outside your body, which is hotter than your blood. With that fire of death you cook your foods in your homes and in your fields. I tell you truly, it is the same fire which destroys your foods and your bodies . . . Eat nothing, therefore, which a stronger fire than the fire of life has killed.” (P. 36)

Jesus goes on in this vein, explaining how you can make raw bread (by sprouting wheat, basically). Jesus also allows us to drink dairy milk (p. 36–37). Presumably this milk would be non-pasteurized. Every seventh day, we are to fast altogether (p. 41).

Sometimes there are modern forgeries (or alleged forgeries) which really do puzzle even the scholars. These include Dr. Morton Smith’s The Secret Gospel of Mark, and the inscription on the James ossuary, “James son of Joseph, brother of Jesus.” The James ossuary inscription resulted in accusations of forgery and a lengthy trial. In both cases scholarly opinion was at least initially divided and expert opinion really was required. Scholarly opinion seems to be that The Secret Gospel of Mark is a forgery, but that the inscription on the James ossuary is genuine; the owner of the ossuary was acquitted of the forgery charges.

But it does not require specialist knowledge to see that there are some major problems with The Essene Gospel of Peace. Szekely has come up with a clearly contrived story: a mysterious manuscript, the physical condition of which Szekely never described, which no one except Szekely has ever seen, which Szekely quickly and effortlessly translated, and which the libraries at the Vatican and in Vienna deny having, is supposed to have fabulous revelations about Jesus? And Jesus wants us to drink raw milk, eat raw food, and give ourselves enemas? This can’t be taken seriously as evidence about Jesus. Readers interested in pursuing this topic further should read Strange Tales About Jesus, by Per Beskow (Philadelphia: Fortress Press, 1983), which discusses this and other modern gospels.

Why did Szekely do it? We don’t know. Perhaps Szekely thought that “the end justifies the means,” and just wanted to promote his own raw-food ideas claiming “Jesus” as his authority. Perhaps he did it just because he could; the man is long gone, and we cannot cross-examine him. But we absolutely cannot rely on The Essene Gospel of Peace as any sort of historical information about Jesus or for that matter anything else before about the year 1920.