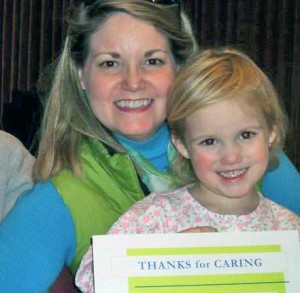 “Mnemosyne Dance” and her daughter

“Mnemosyne Dance” is the pseudonym of a local (metro Denver) vegan activist who is looking for a church where she and her family can feel at home. I thought it would be interesting to interview her for this blog and she agreed. This “interview” was conducted partially in person but then by e-mail. Here’s what she said.

Question: “Mnemosyne,” I understand that you’re looking for a church and you’re vegan. Can you tell us what your background is?

Mnemosyne Dance: I was raised as a conservative Christian, with a Baptist and Pentecostal background. My religious beliefs sheltered me from other ideas. But in early adulthood, I started to change my worldview. In about 1990 I became active in the animal rights movement in Indianapolis. My core beliefs are in the Christian tradition, but I also support animal rights and am now vegan (past 9 years).

In 2004 I married “Thomas.” “Thomas” comes from a similar conservative religious background; he was raised as a Seventh-day Adventist, and is vegetarian/mostly vegan. We have been church shopping, or church-hopping, ever since, trying to find a church that would fit with our beliefs.

Q: Could you say a bit more about what you’re looking for in a church?

MD: Ideally, I would love to find a Christian church that supports the true nature of what Christ was—compassionate, humble, kind, and loving. But it seems in our current world, there is no such entity and we have spent the last ten years of our marriage trying several different traditions. Each time we go to a new church, there is hope. But it is usually quickly dashed when we run into the whole issue of eating and food. Most churches, as you know, base their events around food and eating. It is a way to fellowship with one another and food is available at every church event you go to. So it makes it completely difficult for a vegan — particularly when you have kids who are being raised vegan. I quickly learned that I would have to ALWAYS pack snacks in my pocketbook so that I had something during fellowship time for my kids. It is very rare that there is something the kids can grab at a church function.

Q: What churches have you gone to, and what was your experience there?

MD: We went to the Mile High Church.

Q: How did it go there? I understand they have a vegetarian group there. I don’t think it’s an official group but they meet outside of the church.

MD: We only went a couple of times and I was not even aware that there was a veggie group there.

Q: What church did you try next?

MD: We then went to the Jefferson Unitarian Church in Golden. They had an “ethical eating task force.” I went to one of their meetings and everyone introduced themselves, and I said something like, “Hi, I’m a vegan.” The next person introduced themselves and said “I don’t want anything to do with veganism.” The moderator made no attempt to soften this comment, and so that was the end of my experience with this church. Their idea of “ethical eating” seems to be mostly grass-fed beef and eating locally, but nothing about how animals are actually raised.

We then went to Green Mountain Methodist church, but it didn’t work out either. It was the same routine—packing food for the kids so that they have a snack in their Sunday school.

Q: Do you want to say anything more about this Methodist church?

MD: I loved the minister and her messages were powerful. We limited our time attending “fellowships” because of the entire food issue. Adults are able to go to fellowship and choose not to eat–that is easy for “Thomas” and me. But when you take kids into a place where food is being served, they ALWAYS want to eat. They have no discipline and so I would always have to have food stashed to provide for them.

Q: And after that?

MD: We tried a United Church of Christ in Lakewood. We liked a lot of what they were for. They were liberal, progressive, and backed gay rights, but were not as liberal as the Unitarians on the environment. They had a Bible school for kids, but they never accommodated our kids’ diet. They had a showing of “Food, Inc.”, but in the discussion afterwards there was no discussion of vegetarianism or veganism. We could see the writing on the wall and left that church as well.

Q: After the discussion of “Food, Inc.,” what did the other church members seem to be most interested in?

MD: They were mostly concerned about GMOs and Monsanto after viewing the film.

Q: In what way did this church not accommodate your kids’ diet?

MD: Even though the youth minister knew we were vegan, they never provided vegan options in Sunday school or during fellowship times (or during Vacation Bible School, for that matter. “Thomas” and I gave a substantial donation to support the vacation bible school, but no attempt to accommodate our family’s veganism was made. It was disappointing because I had to provide their snacks each day of the bible school.

Q: What church are you currently going to?

MD: We are now going to the Littleton United Methodist church. They said that they would offer alternative foods at Bible School for kids this summer, but that is not until late July, so we will see. I have a feeling that I will again be providing all of my kids’ snacks. I was disappointed because my son participated in music camp and they said they would have ice cream for all the kids. They gave out ice cream with cow’s milk and handed him a freezy pop. I mean, I guess it’s better than nothing, but I would have brought him a vegan ice cream sandwich or something if I would have known their version of vegan ice cream was going to be a freezy pop. They are only “progressive” when compared to the fundamentalists. There’s no push for people to change their personal choices.

Q: Have any of the churches you’ve gone to tried to raise money for “the Heifer Project”?

MD: OH YES!! In fact, that was another big reason that we left the Jefferson Unitarian Church. Each year, their youth have a big support campaign for the Heifer Project. It was depressing to me to see it.

Q: Do you have any general comments about problems that vegans have in finding a church?

MD: Today’s churches have many people in them who will never change their ways, and unfortunately they are the source of monetary support for the church. It’s all about money, not about compassion.

24 thoughts on “Vegan Looks for a Church”