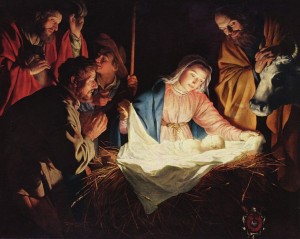 One person recently commented on this site, “Compassionate Spirit could respond [to the need for a vegetarian or vegan alternative in Christianity] by offering a religious experience at Christmas and Easter to see if it meets a need.” This request doesn’t sound that hard. Christmas and Easter are the two most common Christian holidays, and there’s all this material on vegetarianism and Christianity.

Actually, though, this request is actually a lot tougher than it sounds. Let me tell you about it! First of all, I do not try to lead groups into a “religious experience” because, basically, I wouldn’t know how, and I’m not sure it would be a good idea even if I could. I stick to what I know: the history of the situation, a commitment to a way of life, and sometimes some of my own personal experience thrown in. Matthew 6:6 says “pray to your Father in secret,” which in my view is a caution that spiritual understandings are often very private things. They cannot always be put into words and are easily misunderstood or misused. Two cases in point are Christmas and Easter.

Even limiting my discussions to what I think I know, talking about religious subjects can be challenging. Usually I know the basic perspective of the group I’m talking to, so I can use that angle to tie what I have with their version of Christianity (e. g., with Catholics, I’d bring up St. Francis, etc.). But suppose I am speaking to a group that is a mix of progressive and evangelical Christians, with perhaps a large contingent of disaffected “church alumni” — what do I say? It is either going to be insufferably vague or it is going to offend someone, possibly everyone. This audience diversity often happens at vegetarian conferences, where you do get a wide variety of religious perspectives. Some people (typically fundamentalists, but others as well) inevitably don’t like what I have to say and it makes it onto the “speaker evaluation forms.”

But let’s suppose that we have a sympathetic audience that will basically put up with whatever I have to say about Christmas and Easter. Now what? Sure, I could do a talk on Christmas and Easter, but I don’t think it would be quite the uplifting spiritual message that this question envisions. The Christmas and Easter holidays play roles within Christianity that are hard to fit in with vegetarianism, with the Ebionites, or with the whole “simple living and nonviolence” perspective. This is not to say these holidays couldn’t be celebrated by vegans, just that this is a significant problem.

Easter has a lot of negative cultural and religious associations. Many people will immediately associate Easter with eating ham, “Easter eggs,” and “Jesus’ blood, shed for us.” Aren’t ham, eggs, and “blood sacrifice” what we, as vegans, are trying to reject?

A key part of the whole Christmas story, with the explanations about the virgin birth, is anti-Ebionite (as I argue in Diciples). It’s a polemical effort to make Jesus seem unrelated to his relatives, who were all Ebionites by the second century. Christmas also suggests paganism. Besides being Mithra’s birthday, think of exchanging gifts, the Yule log, and the Christmas tree. This isn’t entirely a bad thing! Let’s go shopping! At least Christmas is the one holiday that pagans, secular humanists, and Christians can all celebrate together in peace.

We could, of course, rewrite these stories to give both of these holidays a vegan or Ebionite understanding. In the Christmas story, we could emphasize the animals drawing near to the manger in the traditional Christmas creche. Joseph and Mary are actually Jesus’ parents. They raise their children, including Jesus and James, as vegetarians. In the Easter story, one could emphasize what got Jesus killed in the first place, namely his disruption of the animal sacrifice business in the temple.

There are other, less well-known Christian holidays which are more suitable for a vegan Christian treatment — more about this later. Trying to “clean up” the Christmas and Easter stories creates problems because it draws attention to the fact that, basically, this whole religion needs to be redone, and this will take time, energy, and heart. As a practical matter, what should I say at Christmas and Easter? Perhaps it’s best not to say anything. Let’s just pass the tofu and have a moment of silence.