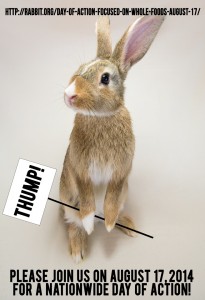 The “Day of Action” on August 17 to protest Whole Foods’ decision to sell rabbit meat is quickly gathering force. VegNews Daily has an article, “Campaign Targeting Whole Foods: Stop Selling Rabbit Meat”; and Animals 24-7 asks, “Are skinned and dismembered rabbits ‘Whole Foods’?” We’ll be at Whole Foods in Boulder, 2905 S. Pearl St. from 12:30 pm – 2 pm, with the Denver Vegans (among numerous other local groups).  If you want to make your own sign, there are instructions and signs to download here. Come on down! Or, if you can’t make it, sign the online petition here.

UPDATE August 28: PETA has now joined the protest against the sale of rabbit meat by Whole Foods.

Whole Foods’ action is disturbing on several levels. First of all, rabbits are a popular companion animal — by some estimates, the third most popular pet in the United States, after dogs and cats. Second, this expands the list of species which it is “acceptable” to eat. Are we going to be eating horse meat or dog meat next, or what?

This is a hard issue for some to wrap their brain around. Sure, eating meat is bad, but why don’t we protest the local supermarket or MacDonald’s? The reason is that this is a “boundary” issue: we are allowing violence against animals in an area or sphere in which it was previously socially disapproved or not allowed. During my entire life — and I have lived quite a while, in many varied places throughout the country— I have never seen rabbit meat for sale. I’m sure it has been sold somewhere, but it has not been widespread at all. 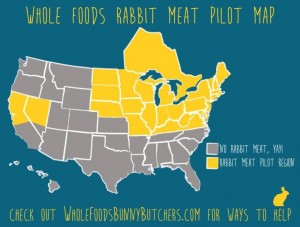 Now, Whole Foods is trying to popularize eating rabbits. It’s evidently not just being sold in northern California, but in many places all over the country, including much of the Northeast and even in Canada (see map). But fortunately, it’s not being sold in Colorado (yet).

Moreover, the whole “humanely raised meat” idea doesn’t seem to apply here. The Whole Foods welfare standards for rabbits states that “stocking density must not exceed 2 lbs./ft2.” Two pounds per square foot?  This sounds like a factory farm. This would put a group of three rabbits, weighing 16 pounds all together, in an area less than 3 feet by 3 feet. It may not be quite as bad as caged hens, but it’s getting pretty close. Moreover, it is evident from their standards that rabbits can be kept in isolation (to prevent aggression), even though they are highly social creatures — so it is not true that they “live in groups.”

Actually, the idea of humane meat (or “happy meat” as many often derisively refer to it) is something of an oxymoron to start with — how can you kill something for food and call it “humane”? The way in which the rabbits are killed can often be fairly grisly as well. But even with the parameters of happy meat, it’s highly questionable whether what Whole Foods is doing could be considered humane, and I don’t think they’ve really thought this out. Even these rather minimal standards are probably not being enforced; it appears that Whole Foods is getting their rabbit meat from places in Missouri and Iowa that are only minimally better than factory farms, if they are different at all. 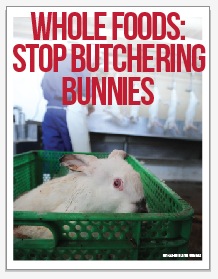 Finally, this is not a boycott. Some people have called for a boycott (and even I suggested it about a month ago), but a boycott is not likely to be as effective as a simple protest from unhappy customers. Whole Foods has done a lot to publicize the idea of eating more healthfully. Why they have let themselves be swept up in the “happy meat” craziness is completely unclear to me. Are slaughtered pets a “whole food”?  We just need a healthy dose of bad publicity for Whole Foods to help them figure out what their mission is.

The underlying reason why this is bad is that Whole Foods is expanding the acceptability of violence against animals. This makes it fundamentally different from what MacDonald’s or the local supermarket is doing by selling dead cows and dead chickens. MacDonald’s isn’t selling Rabbit Burgers (yet!); they are only selling the corpses and secretions of animals that are already being widely eaten. People have a natural revulsion to eating meat, unless they have been socially conditioned to accept it. Eating dogs is acceptable in some cultures, while eating cows is rejected in others. We should be encouraging people to view animals as what they actually are — sentient, feeling creatures. Whole Foods is helping condition Americans to view cruelty to rabbits as acceptable. They would do better not to expand the list of species which people are encouraged to eat, and instead urge people to eat less meat.

8 thoughts on ““Day of Action” for Rabbits”