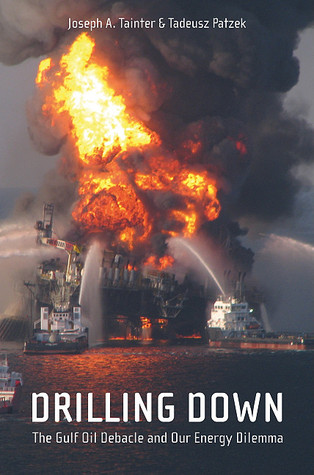 Drilling Down. The Gulf Oil Debacle and Our Energy Dilemma.
Joseph A. Tainter and Tadeusz W. Patzek. Springer, 2011.

Remember the Gulf oil spill in 2011? This catastrophic and deadly failure has now begun to fade from the public memory, but oil continues to be an increasingly complex issue in our society and the world.

To get oil, we now have to contend with “terrorists” abroad (ISIL), chaotic countries (Libya, Nigeria), and autocratic regimes with culture straight out of the Middle Ages (Saudi Arabia). The price of oil is permanently too expensive, unless the economy collapses (as in 2008–2009), and as may be happening now. Environmental damage is rife. Besides the Gulf oil spill, we have fracking (earthquakes, water contamination), the Alberta tar sands (which have done immense damage) and climate change. It’s not just that the situation is bad, but that the depth and complexity of our situation is breathtaking.

What makes Drilling Down really an exceptional book is the unique combination of technical expertise about oil operations (from Patzek) and extensive historical knowledge and analysis of the general problem of collapse (from Tainter). What happened with the Gulf oil spill is actually not exceptional, but typical of a society in decline. Drilling Down retells this incident, in some considerable technical detail, but what is really arresting is that they put it in the broader historical context.

The authors bring quite a bit of technical expertise to the question of how events actually unfolded. But in the end, what do we have? We do not have a simple answer. Yes, this operator should have seen this test result as a problem, and that supervisor should have asked more questions but did not. But buried behind this specific information is a swarm of details. This was an extremely complex task in which layers and layers of decisions were involved. The ultimate cause of the Gulf oil spill does not lay in this operator or that supervisor; the ultimate cause lies in the requirement that we undertake such an immensely complex task in the first place.

Why are we drilling for oil when it is necessary to go a mile beneath the surface of the water in the first place, and then even further beneath the ocean floor to get to actual oil? The same questions could be asked about the Alberta tar sands and about the rush toward “fracked” oil right here in Colorado. All of this modern oil is hugely expensive and environmentally destructive. It is really spooky to read the accounts in Drilling Down and the parallels which the authors draw between our society and the collapsing Roman Empire, in which (just as in our society) both the financial problems and the political infighting seemed to be the outcome of increasingly desperate measures to restore stability.

One very interesting discussion in the book is the example they give of the Byzantine Empire, which is one of the few societies facing this kind of crisis to have survived. They drastically simplified their whole way of governing and defending the empire by localizing it. Running short of money, they simply let the army pay for itself, instead of raising taxes to pay for an army. They made land grants to soldiers on condition of military service being hereditary, and let the soldiers run their domains. This contrasted with the Western Roman Empire, which collapsed during a similar crisis in which the government was unable to pay its troops and was taken over by the barbarians.

It’s clear that this huge, complex drilling operation in the middle of the Gulf had so many interlocking parts that it really was an “accident waiting to happen.” Joseph Tainter is known to us primarily as the author of The Collapse of Complex Societies. Tad Patzek is known to us through his solid analysis of resource depletion issues and his work in conjunction with David Pimentel on the folly of corn ethanol. I can recommend this book to anyone interested in the problem of resource depletion in a historical context.

1 thought on “Drilling Down (review)”