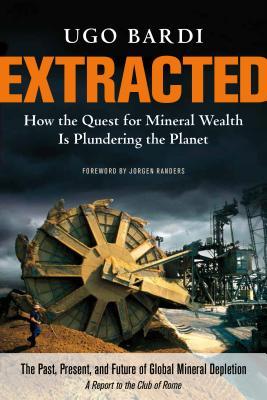 Extracted. How the Quest for Mineral Wealth is Plundering the Planet.
Ugo Bardi. Chelsea Green Publishing, 2014.

Many people have heard of “peak oil,” and are concerned that finite fossil fuels such as oil, coal, and natural gas cannot support our economy indefinitely. But what about metals, like copper, gold, platinum, aluminum, and others? Isn’t there a finite supply of those in the earth’s crust as well? Do we have to worry about “running out” of metals?

Well, actually we do, although it’s more complicated than the phrase “running out” implies. This is the topic of Ugo Bardi’s clearly written and quite interesting book on minerals and how humans extract them.

Extracted does a very good job of explaining the critical role of energy in mining. Basically, with an unlimited source of cheap energy, we can blast into lower and lower quality ores; at the extreme, he considers the possibility of a “universal mining machine” which could extract minerals randomly distributed in ordinary dirt. A “universal mining machine” has a number of problems, including the vast amounts of energy needed and the vast quantity of waste material created.

Ores generally have been decreasing in quality, a consequence of the tendency to go for the “low hanging fruit” first. Why would we mine for gold with expensive equipment if we can find it by panning for it in streams? But as long as we had abundant supplies of cheap energy, lower quality ores didn’t matter so much. It was possible to blast away at lower and lower quality ores, extracting the needed metals willy-nilly using huge machinery.

Now, with the decline of cheap energy and the diminishing supply of ores with rich concentrations of the metals we want, it appears that we really are approaching the limits of mineral extraction. Because our constantly expanding economy requires huge quantities of all kinds of minerals, we now face fundamental questions about the basic direction of our society.

Extracted goes all the way back to the beginning, and I mean the VERY beginning, explaining how metals came to be found on earth (supernovae and the formation of the solar system). This is not primarily about oil, coal, and gas, but they are included as well; one interesting sidelight is his explanation of why fossil fuels can never be naturally formed again (even if we wait hundreds of millions of years).

Bardi goes through the seven common metals of antiquity, and shows how metals were used in antiquity, through the industrial revolution, and down to the present day, when we use very exotic and rare metals for computer equipment as well as a lot of “renewable” technologies. But we now also have problems getting phosphorus, which is essential if we are to continue industrial-scale agriculture. A number of “call-out” sections, by other well-known authors, deal with specific issues such as copper, rare earths, nickel and zinc, the Hubbert model, fracking, and so forth.

The problem of limits on the extraction of minerals is another “limits to growth” issue. To increase our supplies of metals, technology can help, but what is really indispensable is energy. Without that, we face an enforced decline in the material throughput of our society and a decline in the economy and in the way of life which depends on ever-expanding growth.