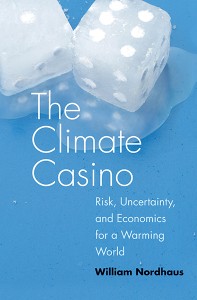 The world has serious problems, such as climate change, peak oil, and resource depletion generally. Economists should be leading the charge on these types of issues, but except for the very few “ecological economists,” like Herman Daly, they say increasingly strange things about a parallel world which seems to have only a tangential relationship to the one in which we actually live.

On the positive side, his book is accessible to a reasonably smart person without any special technical knowledge. He believes that climate change is real and that we need to do something about it. He discusses “tipping points” in the climate that could dramatically escalate the impact of climate change. Another key point is that without international cooperation, dealing with climate change is much more difficult, if not impossible: “If you really thought that only half of all countries would participate [in a climate change pact], then aiming for [a maximum warming of] 2 degrees C is like hoping you can take Amtrak to the moon” (p. 218). It’s also impressive that he discusses the intricacies of negotiating a climate agreement across international boundaries, and in the face of intense partisan politics.

So this is by no means a useless book. But there are a number of very serious problems with his approach. Here are some issues:

1. Limits to Growth. The author doesn’t understand that there are basic limits on human activity, and that we’ve pretty much run into the limits to growth. He doesn’t really argue this point; he, like most other mainstream economists, just assumes that the economy is going to get a whole lot bigger. In fact, the economy is going to be so much bigger, that future economic growth is going to help pay for the costs of dealing with climate change.

Nordhaus says: “This sounds like a fantasy, but it is the result of exponential growth of living standards” (p. 81).

Nordhaus is relying on future economic growth to pay for climate change mitigation and adaptation. We need some sort of explanation here. Most likely, it sounds like a fantasy because it is a fantasy. On the face of it, if the economy increases by a factor of 10, energy use will need to increase by a factor of 10, or perhaps (with hugely increased efficiency) an increase of a mere 3, 5, or 8 times over what we now use. Are we going to be burning 3, 5, 8, or 10 times the coal and oil that we now use? Or throw up huge quantities of solar panels and wind turbines? Or “decarbonize” the economy so that most of our wealth is going into things like poetry readings, massage therapy, or teaching?

Anyone who has been keeping up with the news knows that energy has become hugely more expensive in the past couple of decades; oil increased in price eight-fold between 1998 and 2013. Despite these huge increases in price, we have had only a slight increase in oil supplies, at a huge environmental cost as well (think Alberta tar sands, think Gulf oil spill).

Excuse me? Is this what economic growth is going to look like? Most likely, peak oil will occur fairly soon, and even maintaining the energy status quo will become quite difficult. Increasing energy supplies by a factor of 10, or even 3, needs some kind of explanation.

Daly specifically rejects this concept of a “no growth” economy. Daly says:

We define growth as an increase in throughput, which is the flow of natural resources from the environment, through the economy, and back to the environment as waste. . . . While growth must end, this in no way implies an end to development, which we define as qualitative change, realization of potential, evolution toward an improved, but not larger, structure or system. (Ecological Economics, Daly and Farley, p. 6, italics added).

Ecological economics does not call for an end to economic development, merely to physical growth. (Ecological Economics, p. 64, italics added)

3. Economic redistribution. Nordhaus sees economic growth as the only way to get the world’s poor out of poverty. If Nordhaus had bothered to read Daly any further, he would have also seen that another key point of the ecological economists is that we need to redistribute the wealth. A lot of poverty in the world is simply due to the oppressive and increasing inequality. It is manifestly not the case that our only means to deal with poverty is to increase the size of the economy. We could redistribute some of the wealth out of the hands of the super-rich and give the poverty-stricken masses a stake in saving the planet.

4. Dealing with the climate in a declining economy. The really challenging problem — and one which I would much prefer to see economists address — is how to deal with climate change in a world of declining resources, instead of just assuming that economic growth will solve everything.

It’s not impossible. When there is general recognition of a crisis situation, as when the Japanese attacked Pearl Harbor in 1941, the nation can rise to the occasion. A crisis will be needed to mobilize the country, but that will probably come soon enough. When resource depletion starts to bite and the economy starts to tank again, as it did in 2008, there will be a good opportunity to address the underlying problems.

We need to embrace limits rather than run from them. We will need to have buy-in from the lower classes, and that means income redistribution on a fairly massive scale. If there is assurance that our society will support those at the bottom — that we will not simply turn the poor into the homeless, as we are doing today — then it makes sense to ask people for wide-ranging changes in society and culture.

One effective way of combating climate change which will actually improve the economy is to eliminate livestock agriculture. Livestock agriculture is responsible for over half of all greenhouse gas emissions. Much of climate change is due to the radical changes in land use we have seen in the 20th century. The whole balance between plants (which respire oxygen) and animals (which respire carbon dioxide) has been upset, and the plant-animal imbalance is now responsible for a significant surplus of carbon dioxide. On top of that, all those cows are producing methane, a significant greenhouse gas. Switching away from livestock agriculture will substantially reduce medical expenses by removing the number one cause of disease in the Western world and a significant burden of society’s expenses.

To really fight this thing we are going to need the maximum contribution of ideas and energy. This is where economists should come in, but it looks like they’re part of the problem, not part of the solution. If you are relying on economic growth to pay for climate change, then your plan is fundamentally flawed.

2 thoughts on “Are the Economists Hopeless on Environmental Issues?”