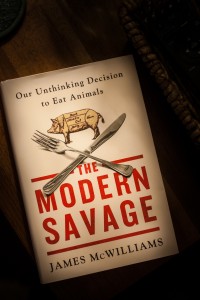 Industrialized animal agriculture is morally and intellectually bankrupt. Society is slowly but increasingly becoming aware of the cruel, unnatural, and environmentally harmful aspects of factory farms. But what is going to replace it?

Well-known food intellectuals such as Michael Pollan, Mark Bittman, Joel Salatin, and Jonathan Safran Foer have advocated returning to localized, more traditional ways of raising animals. Encouraged by some environmentalists and even some animal welfare supporters, nonindustrial animal agriculture has grown tremendously in the past decade. Across the United States, we have seen a lot more backyard chickens, grass-fed beef, and humanely treated pigs — what many vegans refer to derisively as “happy meat.”

This is where James McWilliams’ brilliant and articulate book The Modern Savage steps onto the stage. McWilliams’ critique is devastating because he is so thoroughly familiar with the accounts of the very people who practice this new agriculture. In many cases, the very words of the these new farmers are more eloquent than anything we could say or add. The problems of nonindustrial agriculture are quite significant. McWilliams quotes from one nonindustrial chicken farmer, who poignantly notes about predation problems: “It doesn’t even take a minute for things to become utterly sad and regrettable.”

Predation is a significant problem for nonindustrial farmers, much worse than in factory farms. And death from predation can be quite grisly. Diseases are just as widespread in nonindustrial settings. Salmonella is sometimes more prevalent in “free range” or “all natural” hens, than in their caged companions (p. 146); and internal parasites are often more common among free-range chickens than in caged birds (p. 147).

Little related to nonindustrial animal farming escapes McWilliams’ view. He looks at the emotions of animals, the mechanics of slaughter, backyard chickens, grass-fed beef, and the painful lives of pigs. The problem with industrialized animal agriculture is not the industrialization, but a more basic problem — the fact that it utilizes animals at all.

Localized cruelties are just as cruel. Even small-scale farmers often mutilate their animals in just the same ways that factory farms do: debeaking, castration without anesthesia, and so forth. One mostly-overlooked mutilation is nose rings for pigs — a mutilation which is essential on “natural” pig farms before pigs can be released into open pasture. The nose ring prevents one of the pig’s most natural behaviors, namely rooting; rooting with a nose ring is instantly and severely painful for a pig. When you hear about it, “nose rings” don’t sound that bad; but it is a special torture reserved just for the “happy pigs” when their natural rooting behavior becomes intensely painful.

What looks like a “natural” setting to our human view, is often anything but that for the animal. For “free-range” chickens, to be in an open pasture is actually an exquisite form of discomfort. Chickens are prey animals, and so to place them in open pasture is especially nerve-wracking for them because they cannot use their natural defenses. They naturally desire low overhanging branches so they can fly up into branches to protect themselves from ground predators; they also like higher tree cover to obscure them from hawks and high-flying predators.

“Do it yourself” slaughter often does not go as advertised. “Botched slaughters abound in these narratives,” McWilliams notes in examining small-scale slaughtering operations, “and are, be forewarned, disturbing.” One such account begins, “we came to believe that piercing the chicken’s brain would be the least traumatic for all involved. Not so.” Mobile slaughter units, an attempt to decentralize the slaughter process, may be marginally more “humane,” but are much more expensive and vastly more wasteful of resources than industrialized slaughterhouse facilities.

And what is the consequence of all this on the human psyche? What are backyard farmers doing to themselves when they try to “take back our food” in this primitive way? Forget about the animals for a moment — what is it doing to us? Isn’t it turning us all into monsters? McWilliams dissects the predictable rationalizations which backyard farmers often offer for the rattling of their own psyches by these obviously violent and disturbing events. “The butchers are,” McWilliams notes, “trapped in an unconscious but ingrained habit of moral disengagement.”

The Modern Savage is in the tradition of such books as Peter Singer’s Animal Liberation and shows just how far the discussion of eating animals has come in the past 40 years. It is also, at least in part, an eloquent response to Jonathan Safran Foer’s Eating Animals and Michael Pollan’s The Omnivore’s Dilemma. Both of these latter books indicted factory farms but sought to exculpate nonindustrial animal agriculture.

McWilliams exposes the fallacy of this line of reasoning. The problem with these nonindustrial systems is that localized cruelty is still cruelty. It’s the same thing, with a new type of practitioner — the “modern savage.”

3 thoughts on “The Modern Savage — review”