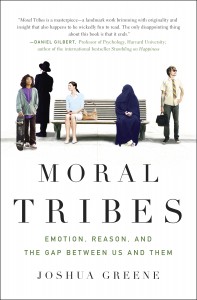 Moral Tribes.  Emotion, Reason and the Gap Between Us and Them.  By Joshua Greene.  Penguin Press, 2013.

What’s the best way to talk about moral issues? This is obviously something that activists worry about a lot, whether their cause is veganism, the environment, climate change, or anything.

According to Joshua Greene, the problem is not lack of basic morality, but in competing moralities. There are many different moral cultures or subcultures, which share among themselves certain ethical ideas which, to them, are obvious. But these ideas differ from those of other moral cultures — the “moral tribes” referred to in the title. Anyone who is interested in this problem, or in moral philosophy and moral psychology in general, should at least take a look at Moral Tribes.

To have a meaningful dialogue, we need to understand how people think about moral issues. In this case, philosophy reflects human psychology, so Greene draws on insights in psychology as well as those in modern ethical philosophy. Greene distinguishes between two distinctly different patterns of ethical thought, which interestingly also reflect the different philosophical schools of thought about how to approach ethics.

Most people form moral judgments quickly, without a lot of thought, based on their intuitions of what is right and wrong. Greene compares this to the “point and shoot” setting on your camera. You form an image of the possible action (say, killing someone) and immediately and intuitively form a judgment about it — killing is wrong, lying is wrong, and so forth. But in other cases, we hesitate, and try to sort things out. What will be the consequences of my action? This is the “manual setting” of your moral judgment.

These two approaches — the quick, intuitive method and the slow, deliberative one — reflect the two chief schools of moral philosophy. There are the Kantians and those arguing for “rights” or universal principles. But there are also those who argue more flexibly in favor of evaluating an action based on its consequences, the “utilitarians” like John Stuart Mill and Jeremy Bentham. Give yourself extra credit if you know that Peter Singer argues in favor of animal liberation on utilitarian grounds, but that Tom Regan argues much the same position on the grounds of rights — “animal rights.”

Most of the time, these kinds of philosophical debates don’t carry much practical significance. But they do become a big deal when different moral tribes interact. This is the tragedy of modern philosophy — not that people lack morality, but that their moral systems are in conflict. Fundamentalists in the U. S. don’t want their children to learn basic biology, while the law commands it — or vice versa, secularists want their children to learn basic biology, but the state forbids the teaching of evolution. Some moral tribes are more individualistic, others more communitarian, still others more (or less) traditional, and so forth.

The intuitive, “point and shoot” morality doesn’t really help us here. Cultures tend to take their own cultural values as intuitive, and then are shocked — shocked! — when other cultures don’t share them. If we want to have a respectful dialogue about different moralities, utilitarianism — the theory that the best action is what has the best consequences — is the “meta-morality” that provides the basis for doing this.

This is an important and valuable book, but it raises some issues which I don’t think the author intended to raise. The main question I’d have for Greene is, what does he think the practical application of this knowledge is? Where, exactly, is Greene taking us? Does he want us to talk to fundamentalist Christians in Kansas that want to prohibit evolution, or to Marxist guerrillas in South America? And what implications do these ideas have for veganism, or the environmental movement, or other movements for social change?

Greene has some good ideas, but I’m not convinced that the case for utilitarianism is quite this straightforward, even on a pragmatic level. If he had tried to explore some of these practical questions, taking some basic liberal issues like (say) evolution and climate change and then trying to apply his principles, the book might have taken a very different direction.

How, for example, would Greene’s ideas apply to the struggle for racial equality in the 1950’s and 1960’s? I’m sure that Dr. Martin Luther King, Jr., behind the scenes, tried to cajole Southern whites by appealing to their practical side. But this utilitarian approach was only part of the story, and not the most important part. King didn’t say, “I have looked at the benefits of racial equality, and they are far more numerous than the disadvantages”; he said instead, “I have a dream.” He appealed to a basic moral intuition, that racial discrimination is hideous and wrong. He needed to rally his supporters to make sacrifices to advance the cause of racial equality.

Greene has some good insights into the different ways that we talk and think about morality, but there is more here than meets the eye. If he had looked at some possible practical applications for his ideas, it’s possible that his book might have taken a somewhat different turn.