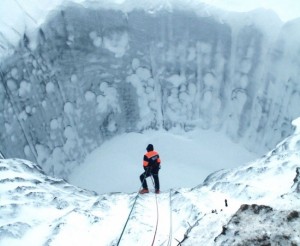 There is some good news and bad news about the massive sinkholes in Siberia. The good news is, people are beginning to become very concerned about them! Some people (such as Alexei Portnov) are concerned for the obvious reason; this is a strong symptom of accelerated global warming.

The bad news is that the leading cause of concern is that “the sinkholes could pose a serious challenge to the quickly expanding gas industry in the area.”

The discovery of the massive sinkhole in Siberia last summer was startling new evidence — for those who still needed proof — that climate change is happening. Scientists discovered unusually high concentrations of methane, a potent greenhouse gas, around the crater. It seemed that the permafrost has started to thaw in the face of recent unusually warm weather in Siberia, about 5 degrees C warmer than normal. But now it seems that eight additional craters have been discovered within a 10 kilometer radius of the original sinkhole. None of them are as massive as the original crater, which was about 200 feet across and over 200 feet deep, but they are still quite worrisome.

It’s one thing if this leads to mass extinctions like those in the Permian–Triassic era 251 million years ago. But it’s quite another if the gas industry is adversely affected. “Gazprom has invested billions in the development of the Bovanenkovo field, the biggest gas structure in the peninsula . . . That infrastructure could be put in jeopardy if more local craters appear.” If the natural gas industry is threatened, you are talking some serious consequences.

I therefore offer the following prediction about the future of climate change action. Nothing will be done until our current governmental and social institutions start to fail. Politics will consume quite a bit of time. Tepid half-measures will be offered, and divisive debates will ensue. Climate change deniers, funded by industry, will continue to confuse the situation and mislead the public. Can you say “gridlock”? This could go on for years. 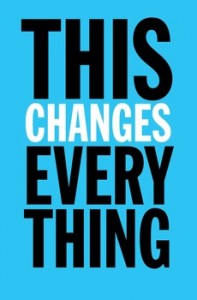 And suppose that the public does get to a point of being sufficiently outraged to demand action and overcome the richest 1%, what would happen then? As Naomi Klein famously says, This Changes Everything. But even Naomi Klein does not understand the extent of the needed changes. We would then find that getting to a sustainable society is a lot harder than it looks.

There’s more to it than just covering the landscape with wind turbines and solar panels, though that’s not a bad place to start. Just that will be hugely expensive and require a massive overhaul of the electric grid. We are also dealing with the imminent arrival of peak oil, and consequently we will not only have more expensive oil for consumer use but also for purposes of the transition to a post-carbon society, which will make the transition even more expensive.

But suppose that we did this anyway. That just gives us electricity; we need liquid fuels, something to put in the gas tank. What we face is not so much an energy crisis as a liquid fuels crisis.

Sure, there are electric cars, but have you priced electric cars recently? Have you tried to drive across the country in an electric car? And how about electric trucks for long distance hauling? Have you tried to heat your home with electricity? Have you done any analysis of “energy return on energy invested” for solar and wind? And as a practical matter, livestock agriculture is responsible for about half of all greenhouse gas emissions; how does renewable energy even deal with that at all?

Don’t get me wrong. We need a renewable economy and there are ways of dealing with all these problems. We could put the whole economy on a “war footing.” We could electrify the railroads, switch to “passive houses” for building insulation, massively upgrade the grid, and rapidly implement mass transit.  But this is going to be hugely expensive. People talk about all the jobs that a booming solar and wind industry will bring, and that’s nice. But in the end we will have a lower standard of living than we do today. The government can print money, but it can’t print oil, and there is no real way to get around energy shortages.

We need to prepare both for the end of capitalism and for the end of economic growth. Since we have already overshot several ecological limits, in practical terms this means not just standing still economically, but getting used to a lower level of physical consumption. Almost no one, not even in the environmental movement, is ready to face this reality, much less try to explain it to their constituents; and it may be even longer before anyone who tries to tell the truth can actually manage to get elected. A lower standard of living is going to be a hard sell. Faced with massive institutional failure, there is the real risk of fascism or some sort of military dictatorship. People will look at the chaos and turn to some charismatic leader and bang, there goes Western democracy.

There is a way out of this, but it is through combining political action with the development not just of new institutions, but a new culture. Cultural and social change is just as important as political change. As a practical matter, veganism has a large role to play, not just in terms of public policy, but as part of a new set of social norms.

3 thoughts on “Sinkholes in Siberia”