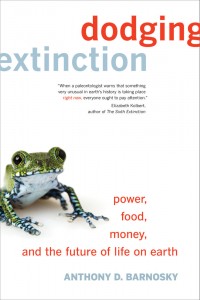 Extinction is a hot topic these days. Megafauna — those “big animals” whose average size is 100 pounds or more — are going extinct at an alarming rate. There is huge popular sympathy for elephants, whales, tigers, giraffes, apes, and other animals endangered by human activities. At the same time, we face a huge paradox: there is more megafauna biomass now than there ever has been for past 100,000 years or so. How can megafauna become more prolific and yet so many species be faced with extinction?

There’s a simple explanation. The cause of megafauna extinctions is one particular megafauna species, namely us, and a number of other species that we have brought into existence, namely our livestock. These species are hugely prolific and are crowding out all the others. Most of the megafauna biomass on the planet is humans and their livestock.

The cause of megafauna extinctions is that wild animals don’t have anywhere to live. It’s as simple as that. A major dose of livestock agriculture, with a smaller dose of human overpopulation, is at the root of these extinctions. More of us and our livestock means fewer wild animals.

The paleontologist Anthony Barnosky wrote a paper with the impressive-sounding title, “Megafauna biomass tradeoff as a driver of Quaternary and future extinctions.” Barnosky’s point is that historically there has been a close relationship between megafauna extinctions and human population. The total megafauna biomass (the mass of all the big animals on the planet) has remained remarkably constant. As human population goes up, population of other megafauna has gone down. Barnosky’s paper isn’t new; he published it in 2008. More recently, Barnosky’s book Dodging Extinction outlines his conclusions in more popular terms.

Barnosky postulates that because of the basic nature of photosynthesis and the plant biology of the planet, the earth can naturally support about 200 million tons of megafauna biomass (Dodging Extinction, p. 58). It’s just a question of which species are going to predominate, whether it’s dinosaurs or dogs. If you increase one, you have to decrease another. (But there have been two important exceptions — toward the end of the last ice age, and since the industrial revolution. We’ll come back to these exceptions in a moment.)

The story of human-caused extinctions goes back into human prehistory. Humans initiated a mass extinction event some 50,000 years ago. There were “pulses” of extinction, basically as a consequence of overhunting, as humans expanded from continent to continent. Where humans went and multiplied their numbers, extinctions followed. Mastodons, mammoths, saber-toothed tigers, giant sloths, and numerous other species all disappeared.

Human-caused extinctions have generally been the result of displacement. As humans increased, other animals decreased and some became extinct, but the total megafauna biomass remained roughly the same, about 200 million tons. It’s just that there were more humans, and less of everything else.

Megafauna biomass stayed pretty much constant at 200 million tons, with two significant exceptions. The first exception was towards the end of the last ice age, about 13,000 to 10,000 years ago, during the global cooling episode called “the Younger Dryas.” When this global cooling is added to human overhunting, the effect was not just human displacement of wild animals, but a massive decline in megafauna biomass, from 200 million to 100 million tons or so.

From 10,000 years ago until about the year 1500, humans and their domestic animals slowly increased to fill this megafauna gap. During this period, as a general rule, there weren’t a lot of species extinctions of wild animals beyond the species that had already gone extinct (mammoths etc.), although humans were gradually increasing in number. 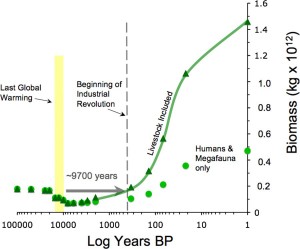 That all changed with the beginning of the industrial revolution, when the use of fossil fuels and the development of modern machinery, agriculture, and medicine all resulted in a dramatic increase in TOTAL megafauna biomass. It went from 200 million to 1500 million tons, over seven times as much, in what is a geological blink of an eye. About one-quarter of this increase was humans, about three-quarters was their livestock and pets (Dodging Extinction, p. 58).

This is a HUGE and totally unprecedented increase. Let’s think about this for a moment. Right now, there are more megafauna on the planet than there have been for hundreds of thousands of years. Arguably, there is more megafauna biomass right now than there ever has been, in the four billion year history of the planet. And yet, we are still faced with a mass megafauna extinction event (including, potentially, us). Thank you, fossil fuels; thank you, population explosion.

Barnosky adds tellingly at this point:

“That’s one of the reasons the biomass graph scared me. It shouts out that the only reason we humans can exist in such high numbers — numbers that are far above Earth’s normal carrying capacity for big land animals — is that we add a huge amount of energy to the global ecosystem, mostly through the extraction of fossil fuels. Without that extra energy, a lot of people would have to die . . . It’s as simple as that” (Dodging Extinction, p. 59–60; italics added).

This doesn’t mean that humans are necessarily lost; maybe renewables like solar and wind can save us. But it does mean that the “natural” population limit of the planet (without fossil fuels or some other form of modern technology) is roughly that of three hundred years ago, at the beginning of the industrial revolution, when the human population then was about 10% of what it is now.

The primary cause of megafauna extinctions is human beings. Further, the area of “human” dominion over biophysical nature includes not only humans themselves, but our livestock, which today place an even heavier burden on the planet than humans alone. The primary cause of extinctions is not just overpopulation of humans alone, but the overpopulation of livestock. We do not face a human population problem as much as we face a human–livestock population problem. Obviously, the survival of the wild animals as well as the survival of humanity depends on humans transitioning to veganism as quickly as possible.

8 thoughts on “Megafauna Extinctions and Overpopulation”