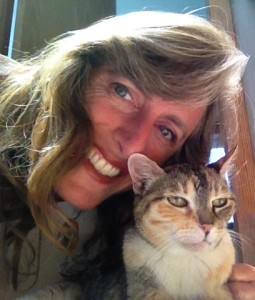 Lisa Levinson organizes Vegan Spirituality groups, retreats, and online gatherings across the country as part of In Defense of Animals’ Sustainable Activism Campaign, offering emotional and spiritual resources for animal activists. We recently discussed Vegan Spirituality and this is what she said.

Question: How did you get started down the idea of “vegan spirituality”? What is your religious / spiritual background?

Lisa Levinson: In 2009, my vegan friend Sandi Herman coined the term when describing her spiritual path. We had participated in various spiritual circles, but were surprised to be the only vegans. For us veganism was intertwined with our concept of spirituality, based on compassion for all sentient beings.

I grew up in a Jewish household and my grandfather was a reform rabbi. I never liked the references to animal sacrifice in this tradition, though I attribute my social justice actions to my Jewish roots. I explored various paths until I realized that veganism encapsulated my core values and beliefs.

Q: And what does spirituality add to veganism? Can the vegan movement benefit from a spiritual influence? How is “vegan spirituality” different from any other kind of veganism?

Q: Why shouldn’t vegans who want a spiritual basis for their vegan principles, just seek to establish a vegan point of view within whatever tradition they identify — Christian, Buddhist, Jewish, whatever? Do you think it’s useful to distinguish between spirituality and religion, and what’s the difference, if any? We already have the Society of Ethical and Religious Vegetarians, the Christian Vegetarian Association, Jewish Vegetarians of North America, Dharma Voices for Animals, and so forth.

LL: This strategy works well for many! Others feel that veganism is their religion. Vegan Spirituality welcomes vegans of both persuasions. For me, veganism and spirituality are one and the same. Spirituality refers to how we relate to ourselves, to others, and the world around us.

Q: Do you think that veganism is, or could become, a religion? You’ve mentioned elsewhere that there was a court case that cited certain specifics of what a “religion” is. If veganism was a religion, would it address other issues like nonviolence towards humans and poverty, or metaphysical beliefs like karma and reincarnation?

We discussed this idea in one of our Vegan Spirituality Groups and members decided that Vegan Spirituality was a practice, or path, but not a religion. As for the court case, the judge said religion didn’t require a belief in a higher power, but did require an exploration of major concepts such as life and death, along with traditions and rituals. Actually, his response seemed consistent with Vegan Spirituality!

Q: Would the world be better off without religion? Why shouldn’t we just reject religion altogether, and adopt a secular ethical vegan viewpoint?

Q: Some years ago Rachel MacNair did a poll of vegetarians and vegans, and found that the leading religious preference of vegetarians and vegans was “undefined spirituality” at 27%, Christianity was a close second at 26%, and atheists and agnostics were third with 21%, with everything else splitting up the remainder. Does this sound right to you as an assessment of the sentiments of vegans?

LL: Yes, I agree that many vegans who consider themselves spiritual fall into this category of general spiritualists, who may mix and mingle various beliefs and practices to create a path they choose to walk.

Q: There must be a lot of people from a variety of different backgrounds who are interested in vegan spirituality. Has this affected the VSG, and in what ways?

LL: Spirituality is an “emergent property” — it has new properties that aren’t found in any of its constituents, like a bodily organ has properties different from any of the individual cells which make up the organ. People may have different ideas of what spirituality is, or what it feels like. It’s very broad and inclusive. Each VSG is unique, based on the needs of the organizer and the members. Some groups offer general spiritual programs, while others are Christian-based or focused on alternative healing modalities.

Q: Can you summarize what you hope to accomplish by advancing the idea of vegan spirituality?

LL: Vegan Spirituality is a movement of people choosing compassion for all living beings as their fundamental spiritual path. The idea helps to validate the devotional aspect of veganism, provides a sacred space for community connection, and creates a support network for people who help animals via love-based activism.