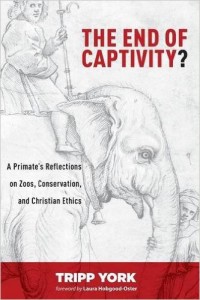 The End of Captivity? is a short, open-ended Christian meditation on humans and their effects on wild animals. The book is both challenging and infuriating at the same time. It is challenging because it asks us to question the basic logic that puts animals in zoos. But it is sometimes infuriating because, as the author points out, human dominion over the planet is so complete that there isn’t very much space around for wild animals. Where, exactly, can we send them?

The book progresses not through challenging proposals, but through questions, thoughts, and dialogue. A good portion of this brief book consists of lengthy interviews he conducts with Greg Bockheim, a zookeeper, and Mindy Stinner, a conservationist.

At the outset zoos seem almost too easy a target, at least for vegans and animal rights activists. It is a simple thing to be outraged by zoo “atrocities” such as the 2014 killing of Marius, a healthy giraffe by the Copenhagen zoo, which sparked international protests. Wild animals imprisoned? How hard is it to see that there’s something wrong here? Why don’t we just release them back into the wild?

Of course the answer comes back — and where, exactly, would this “wild” be? He lets Mindy Stinner answer the question:

When a child asks me why we don’t just let our tigers go, I ask them how they would feel waiting at the school bus stop knowing that a dozen tigers roamed free nearby. So why not send them back to India? We pull up a map of the population of India, which pretty much answers the question itself. (P. 56)

Even the remaining “wild” places in the world exist there because of human-imposed barriers, wilderness areas carefully marked off to keep the wild animals in and the humans out. Many people instinctively feel that there should be room for all the animals that we control in the world, all the abandoned dogs and cats, and all the wild animals born into zoos.

But we come back again and again to the fundamental question: where, exactly, are you going to put them? Yes, it’s an atrocity, but what precisely do you propose to do about it? Eventually, it looks like wild animals will be displaced from the entire world, except in specifically protected areas — zoos, sanctuaries, or protected wildlife and wilderness areas.

York later moves on to consider all captive animals, including animals on factory farms, and vegetarianism — which he hates to talk about. “I am very reluctant to stand in judgment of what other people eat. I know that irks some of my vegan and vegetarian friends, but I am often more bothered by their sanctimonious condemnation of other people’s diets than I am by other people’s diets” (p. 90). Sanctimoniousness is certainly a tactical error, especially for a vegan in the American south. But while I often cringe at inappropriate vegan remarks, I also remember PETA’s advice: “never be silent.” For us, the suffering of animals is an awkward problem, as we navigate the various social protocols; for the animals, it’s life itself.

But for this book, he fortunately takes up the subject of vegetarianism anyway. He tries to orient his views within Christianity, quoting from familiar Bible verses such as Genesis 1:29 (plants are our food), Isaiah 11:6–9 (the peaceable kingdom), Matthew 6:26 (God cares for the birds of the air), Luke 12:6 (not a sparrow is forgotten by God), and others. In addition to the usual reasons for being vegetarian, he adds this: “I am a vegetarian because any eschatology grounded in the kind of hope that does not overturn our violent natures is not much of an eschatology.”

Reliance on scripture to prove a point about Christianity makes me a bit uneasy. Can’t one prove almost anything by quoting the right texts? Is this the direction we want to take Christianity? What about Genesis 1:26, the assertion of the right of human dominion over the whole earth? Or the countless animal sacrifices in the Old Testament (Leviticus 3 ff.), Jesus eating fish after the resurrection (Luke 24:42–43), or Paul’s statement that it is all right to buy anything sold in the meat market (I Corinthians 10:25)?

At the same time the book provokes other questions, first about zoos and wild animals in general, and secondly about Christianity’s role in all this. York draws attention not only to the problem of human domination, but of the “natural” cruelty of nature. He tells a story about a small girl at the beach frantically trying to rescue small fish (the bay anchovy?) stranded in pools as the tide went out. Try as she might, she was able to rescue only a small percentage of them. York writes that he wanted, but was unable, to ignore “the absurd splendor of a billion little ecosystems home to so much pain and suffering.” Here we have an awareness and a pessimism worthy of the Buddhist assertion that all life is unsatisfactory — the first noble truth.

Is there anything we can do about the wild creatures so rapidly disappearing from the earth? The author hints at, but nowhere makes explicit, any radical proposals which might make it safe for wild animals and ecosystems. Here’s the kind of proposal I might have expected the author to make, which I can make right now: the entire country could go vegan and completely divest itself of livestock agriculture. Then, we could return the areas formerly dedicated to livestock agriculture, mostly in the middle of the country, to wild animals. A lot of it would revert to forest, which would help with climate change, taking a significant chunk of carbon dioxide out of the air. We could connect the human areas together with protected roads, trains, and bicycle paths, with overpasses for wild animals so that this new wilderness in the heart of America would not be broken up.

It’s really cruel and unreasonable to send elephants and giraffes back to Africa, and not just because of the animals. How do you suppose the people in Africa feel about having a bunch of elephants dumped in their back yard, when their own attempts to scrape out a living on the land comes into conflict with these animals? Why not give us the responsibility for these wild animals? We can afford it, and we could turn much of the country into a gigantic wildlife sanctuary. Then North America might more truly resemble the time just 20,000 years ago, when camels, horses, tigers, giant sloths, and elephant-like creatures (mammoths and mastodons) roamed the land. (To be clear, this is my suggestion, not York’s.)

Do you think Christianity could get behind such a proposal? I doubt it, but this is the kind of action that is required if we are going to have a shared future with other animals — or perhaps, any future at all. It is certainly something that vegetarians and vegans should be thinking about. Megafauna (large animals), by biomass, are overwhelmingly humans, their pets, and their livestock. About 1/3 of this “human” portion is humans, and 2/3 is livestock. The biomass of all the large wild land animals — the great apes, elephants, giraffes, lions, rhinoceroses, and so forth that we see in zoos — is less than 10% of the total biomass of our livestock on the planet.

By drawing attention to the reality of wild animals on the planet, Tripp York has made an important contribution to the problem of conservation in Christian ethics. We have not just dominated the wild places on the earth, we have destroyed them, and the day of accounting cannot be far off.

8 thoughts on “The End of Captivity? (review)”