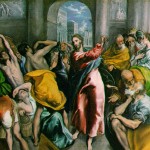 Thank you for taking an interest in the “Compassionate Spirit” blog. For what it’s worth, here are the five most popular blog posts that I wrote in 2015. “Most popular” posts are not necessarily the posts that I worked the hardest on, nor are they the ones that attract the most comments. But it’s always interesting to me to see what sort of things you, the readers, are looking at.

1. Was Jesus a Vegetarian? Yes, he was, and I offer three key points in support: the controversy over vegetarianism in the early church, the later history of Jewish Christianity, and Jesus’ attack on animal sacrifice.

2.  The Drought in California. The California drought is not going away anytime soon. And guess what uses more water than anything else in California? Livestock agriculture.

3. What does the decline of Christianity mean? It sounds as if Christianity is on track to disappear as the dominant religion in America within a generation or two. Is this good news or bad news?

Some posts from previous years are still doing quite well. One post written in 2012 is even more popular than any of these: “Be the change — where did this saying come from?” While Gandhi would have probably agreed with this well-known aphorism, the saying as we have it in its modern form comes from someone you’ve probably never heard of — Arleen Lorrance.