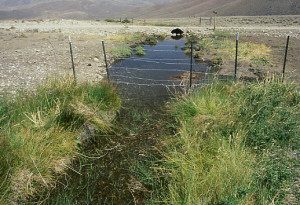 Many people are now discussing the situation in rural Oregon, where a group of armed militants have taken over the headquarters of the Malheur Wildlife Refuge. The militants are supporting unlimited access of cattle ranchers to public lands and are apparently willing to use force. In an age where people snapping pictures of factory farms are accused of being “animal rights terrorists,” it is going to be interesting to see how the government will react to what seems to be the genuine article — actual terrorists with actual guns.

Under current law, cattle ranchers can graze on public lands, and pay only a fraction of what comparable private lands would charge for the same thing. It’s basically a huge subsidy for the western livestock business and is quite controversial. Some people think that fees for public lands ranching should be increased, or the practice of grazing on public lands should be phased out altogether. On the other hand, some ranchers not only think that public lands ranching is all right, but that they shouldn’t have to pay the federal government anything for grazing their cattle. This is evidently the opinion of the bunch who are responsible for the takeover.

The events of Saturday and Sunday

The leader of what is essentially the gang of terrorists who has organized the takeover is Ammon Bundy, son of the Nevada rancher Cliven Bundy (about whom more below).  Ammon Bundy led the group of at least a dozen heavily armed men who seized the headquarters of the Malheur wildlife refuge on Saturday afternoon and said they would stay indefinitely.

There are a number of very strange things about this protest. To begin with, it started out on Saturday, January 2, as a peaceful protest, attracting about 300 people, who were protesting the imprisonment of two ranchers convicted of arson, Dwight and Steven Hammond. Ammon Bundy and his group, consisting of at least about a dozen armed people, broke away from the larger protest and drove about 60 miles to seize the headquarters of the wildlife refuge. But there is clearly a division between the protesters and the Bundy group. Some of the protesters are unhappy with Bundy and his actions, feeling that Bundy is going to delegitimize their demands.

While there seems to be some confusion about the matter, Bundy’s group seems to have two demands:

1. That the federal government relinquish control of the Malheur National Forest.
2. That the ranchers (Dwight and Steven Hammond) not be sent to prison.

Ammon Bundy said that the goal was to turn federal land over to miners, ranchers, and loggers. This, however, may be attributing more coherence to their views than is warranted; another CNN interview reported that Bundy’s demands were “vague” but that he wanted to restore “people’s constitutional rights.”

The ranchers convicted of arson

Let’s back up a moment and talk about the first issue — those ranchers convicted of arson. First of all, these two ranchers don’t seem to be coordinating with Bundy and his group. Dwight and Steven Hammond are apparently still planning to report to prison for their five-year sentence, and the Hammonds’ attorney said that Bundy’s group does not speak for them.

The Hammonds were convicted of arson because wildfires they set spread to federal property. They had already served some time, but because they had been convicted of anti-terrorism charges, the judge said the time served was not enough and ordered them back to prison.

The Hammonds said they had set the fires to reduce the growth of invasive plants. Prosecutors give a different version of events. They said that the Hammonds torched the public lands to cover up poaching activities. Witnesses saw the Hammonds illegally slaughtering a herd of deer and setting a fire to cover up the evidence. A teenage relative testified that Steven Hammond had given him a box of matches and told him to start the fires.

The “right” to graze on public lands

What about the second issue, the right of ranchers to graze on public lands? It turns out that there is quite a history here. Ammon Bundy is the son of Cliven Bundy, well known because of a very similar 2014 controversy which also led to an armed confrontation. Instead of paying the grazing fees in excess of $1 million which were unpaid on land he had grazed since 1993, Cliven Bundy refused, paying the government nothing. Threats of violence had kept the BLM from collecting. In 2014, the BLM told Bundy they were going to impound his cows in lieu of the debt; but after Bundy invited armed followers to travel to a remote location and point their weapons at federal employees, the federal government backed down. The Republicans picked up this “states’ rights” angle of Bundy’s argument and he momentarily became a right-wing hero. The Nevada governor issued a statement supportive of Bundy which criticized the BLM. Republicans started backing away, though, after Cliven made some blatantly racist comments.

Cliven Bundy himself (the father of Ammon) says that he is not overtly involved in the current takeover, by the way. But at least one of Ammon Bundy’s gang also was with Cliven’s earlier standoff in 2014.

For years, some environmentalists have taken up the issue of public lands grazing and have attacked the craziness implicit in the basic idea. It is a blatant subsidy of cattle ranching, at the expense both of the public and of the environment. Here is a sample of sources:

Sacred Cows at the Public Trough, by Denzel and Nancy Ferguson (1983).
The Waste of the West, by Lynn Jacobs (1992).
Welfare Ranching: the Subsidized Destruction of the American West, edited by George Wuerthner and Mollie Matteson (2002), a huge coffee-table type book with lots of photographs.
Western Turf Wars: The Politics of Public Lands Ranching, by Mike Hudak (2007). This is especially informative for anyone wanting to look into the details of attempts to deal with public lands ranching.

A number of people have already pointed out the racist overtones of both the media response and the casual government reaction. What do you think the reaction would be if armed blacks, or armed Muslims, were to take over a government building and use inflammatory rhetoric like “The people have been abused long enough” and “we need you to bring your arms”? So far, we haven’t seen the National Guard called out to Burns, Oregon — though time will tell.

The good news is that the building they have taken over is out in the middle of nowhere. There is no immediate threat to any populated areas and evidently no employees were in the building at the time. But their actions, while they may not technically fit the definition, comes pretty close to being “treason.” There are plenty of witnesses and plenty of overt actions. The government is pursuing people who just go onto factory farms and take pictures these days, so why shouldn’t they go after people with guns who are actually wanting to take on the government?

Bundy is acting in a bizarre, highly manipulative, and unpredictable manner, even by right-wing militia standards. He is acting like a cult leader. The whole incident of the initial protest of the Hammonds’ imprisonment was evidently just a pretext; they cared nothing about the ranchers who were going to prison. They just wanted to set in motion their own little version of the “beer hall putsch.”

Heidi Beirich, of the Southern Poverty Law Center, also saw ominous implications. She said that this was a continuation of the initial Cliven Bundy standoff in April 2014, when the federal government backed down. “The Bundys were able — at the point of a gun — to drive the federal government and its representatives . . . off the land . . . it’s emboldened the entire movement to basically think, ‘We don’t have to follow the rules.’”

The Sheriff of Harney County, Dave Ward, summarized the problem well: “These men came to Harney County claiming to be part of militia groups supporting local ranchers, when in reality these men had alternative motives to attempt to over throw the county and federal government in hopes to spark a movement across the United States.”

This incident dramatically shows the sense of entitlement which some cattle ranchers have, and the kind of intimidation which makes it almost impossible to try to enforce laws against them. It is typical of the casual attitudes towards cattle ranching and the reluctance of anyone to act against environmental or animal rights abuses even in the most flagrant cases.

UPDATE January 4:
The Bundy gang seems to be increasingly isolated politically.
1. The ranchers convicted of arson, Dwight and Steven Hammond, have surrendered to authorities to being their jail sentence.
2. A CNN national security analyst, who formerly served in the Obama administration in the Department of Homeland Security, described the Oregon building takeover as terrorism.
3. Presidential candidates, both Republican and Democratic, seem to be declining comment on the standoff.
4.  On Monday January 4, the LDS church (Mormons) issued a statement saying they “strongly condemn the armed seizure of the facility,” urging “peaceful means” to resolve the dispute. Ammon Bundy is an LDS member and had previously cited religious ideas in support of his effort.

NOTE: please advise me of any errors of fact in this piece and I will update accordingly. I have no direct contact with any of the principals in the case; I’m just looking at the news reports like everyone else.