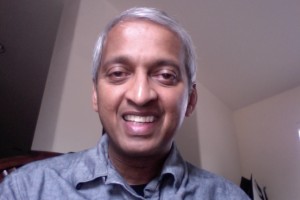 Last December, Sailesh Rao and two of his colleagues made a presentation to the American Geophysical Union, entitled “The Lifestyle Carbon Dividend.” The key point of this paper was that by simply stopping livestock agriculture, we could sequester a lot of carbon and thereby decrease the carbon dioxide levels of the atmosphere. The reason is that grazing land occupies much of the planet’s surface today. In the absence of livestock agriculture, much of this area would revert to forests, which incorporate much, much more carbon than grasslands or pasture. How much carbon could we sequester in these new forests? More carbon than has been released into the atmosphere since 1800.

Two distinguished colleagues co-authored this paper with Sailesh: Prof. Atul Jain of the University of Illinois and his Ph. D. student, Shijie Shu. Prof. Jain is the originator of the Integrated Science Assessment Model (ISAM) and he and his students have been working on it for the past 20 years. Prof. Jain is a well known land carbon expert and a principal contributor to the IPCC WG3, Chapter 11 on Agriculture, Forestry and Other Land Use (AFOLU).

“The Lifestyle Carbon Dividend” is an interesting addition to the growing evidence relating climate change to livestock agriculture. In 2009, a WorldWatch article by Robert Goodland and Jeff Anhang estimated that over half of all human-caused greenhouse gas emissions (GHGs) were due to livestock agriculture. Goodland and Anhang conservatively estimated that using land now devoted to livestock for biofuels instead would replace fossil fuels worth 2672 million tons of CO2 or CO2-equivalents, or 4.2% of all the annual human-caused GHGs. But they also add that just letting the land “regenerate as forest could potentially mitigate as much as half (or even more) of all anthropogenic GHGs” (emphasis in original). Elsewhere Goodland said that through agricultural change we could bring carbon in the atmosphere back down to pre-industrial levels.

Sailesh Rao and his colleagues confirm that regenerating forests on current grazing land could mitigate all the CO2 added by humans since 1800. 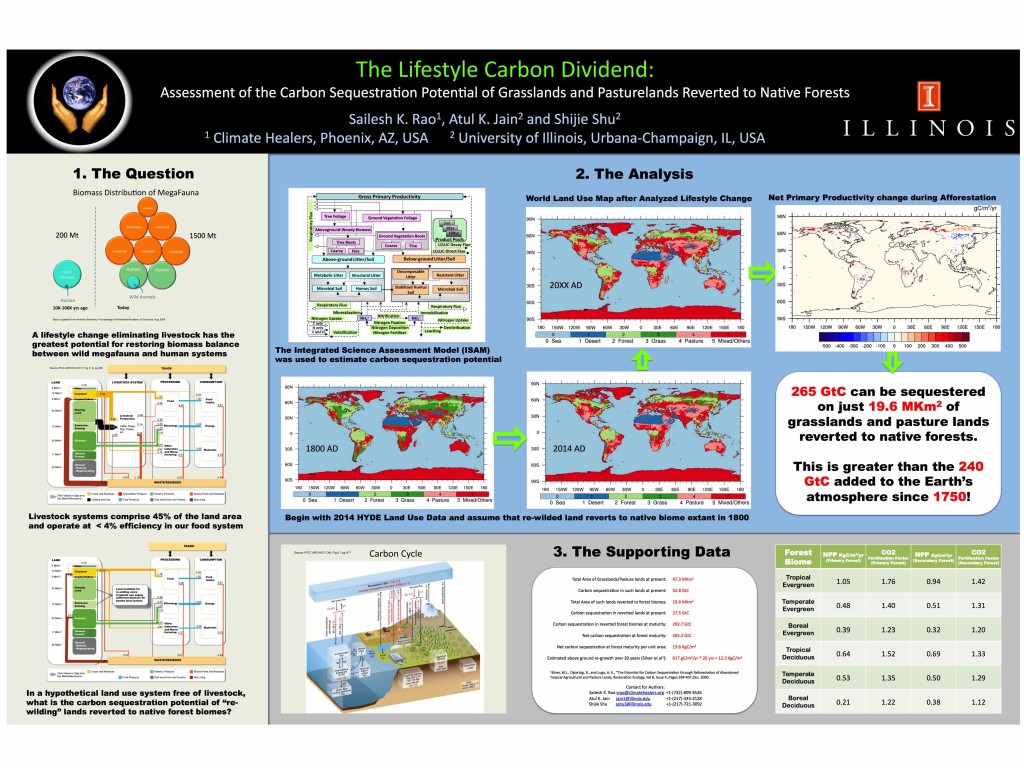 I am copying in their study, below. Also, I have attached their (very large) poster, above.

GC13E: Livestock, Land Use and the Environment
AGU Fall Meeting, 14-18 December 2015
The Lifestyle Carbon Dividend: Assessment of the Carbon Sequestration Potential of Grasslands and Pasturelands Reverted to Native Forests

ABSTRACT
What is the potential of a global transition to a vegan lifestyle to sequester carbon and mitigate climate change? To answer this question, we use an Earth System Model (ESM), the Integrated Science Assessment Model (ISAM). ISAM is a fully coupled biogeochemistry (carbon and nitrogen cycles) and biogeophysics (hydrology and thermal energy) ESM, which calculates carbon sources and sinks due to land cover and land use change activities, such as reforestation and afforestation. We calculate the carbon sequestration potential of grasslands and pasturelands that can be reverted to native forests as 265 GtC on 19.6 MKm2 of land area, just 41% of the total area of such lands on Earth. The grasslands and pasturelands are assumed to revert back to native forest biomes that existed prior to the industrial era and these include tropical, temperate and boreal forests. The results are validated with above ground re-growth measurements. Since this carbon sequestration potential is greater than the 240 GtC that has been added to the atmosphere since the industrial era began, it shows that such global lifestyle transitions have tremendous potential to mitigate and even reverse climate change.

Summary
In the 2014 edition of its annual Living Planet Report, the World Wildlife Fund reported that the Living Planet Index (LPI), which measures the biomass of over 10,000 representative mammal, amphibian, bird, reptile and fish species, had declined by 52% between 1970 and 2010 (McCL 2014). During that same time, the human population of the world almost doubled from 3.7 billion to 7 billion and human per capita consumption also nearly doubled so that the net human impact on the planet nearly quadrupled (Mali 2014). Contrary to the standard predator-prey ecological model that predicts a reduction in predator intake as prey population declines, we human beings have deployed technologies to continue the exponential increase in our consumption despite significant declines in our prey population as measured in the LPI. For instance, we now use remote sensors, satellite imagery and big data software technologies to track and catch fish stocks in the ocean even as they swim at depths of 2000m below sea level. If such exponential growth in the human impact on the planet continues apace into the future, it is easy to show that the remaining biodiversity of the planet will be extinguished by 2025, for such is the impact of exponential growth. Therefore it appears inevitable that global lifestyle changes will be imposed upon humanity within the next 1-2 decades and it is incumbent upon us to ask what global lifestyle changes can be adopted voluntarily today so that they result in a softer transition towards a sustainable future.

In this paper, we examine the impact of a global lifestyle change that eliminates the production and consumption of livestock products, since such a “vegan” lifestyle is a growing trend in the world today. According to Google, the search term, “vegan” has trended continually higher for the past few years to the point where interest in Veganism now exceeds the interest in a common brand like “Coca Cola”. This rising interest in Veganism is trending highest in high-income countries such as the US, Canada, Australia, New Zealand, Germany, Austria and the UK, which augurs well for its continued growth in popularity.

According to the UNEP’s International Panel on Sustainable Resource Management, a global transition towards a vegan diet is crucial to address several environmental problems simultaneously [Hert 2010]. This is because the biomass of livestock megafauna in the world is roughly three times the biomass of humans, which in turn is twice the biomass of all wild megafauna that existed for millennia in prehistoric times [Barn 2008]. The global land use block diagram published in the fifth Assessment Report (AR5) of the UN Intergovernmental Panel on Climate Change (IPCC) (Smit 2013) shows that livestock production now occupies 45% of the ice-free land area of the planet (see also [Thor 2011]). If even a fraction of this land can be reverted to native forest biomes, this has the potential to mitigate biodiversity loss substantially. A global transition to a vegan lifestyle would substantially mitigate marine biodiversity loss as well, once we cease harvesting approximately 200 Million tons (Mt) of fish from the ocean annually for food and as “by-catch” [FAOstat].

Similarly, such a global lifestyle change has the potential to mitigate anthropogenic interference in the Earth’s nitrogen cycle since approximately half the biomass output from cropland that use nitrogen fertilizers for production are fed to animals directly [Smit 2013]. However, in this paper, we narrow our study to a very simple, but pertinent question in relation to climate change and the Earth’s carbon cycle. Specifically, we address the question, “What is the potential of a global transition to a plant-based, vegan lifestyle to sequester carbon and mitigate climate change?”

To answer this question, we examine the biomass flows through the IPCC AR5 global land use block diagram and assess that all pasturelands and grasslands, currently providing over 3.7 Gt of dry matter biomass for livestock consumption, can be reverted to native biomes in the event of such a transition, while existing croplands can be used to directly feed the present and future human population with an adequate diet. We then examine global carbon and nitrogen cycles through an Earth System Model (ESM), the Integrated Science Assessment Model (ISAM) (Jain 2013) to assess the carbon sequestration potential of such grasslands and pasturelands when they revert to their native biomes. ISAM is a fully coupled biogeochemistry (carbon and nitrogen cycles) and biogeophysics (hydrology and thermal energy) ESM, which calculates carbon sources and sinks due to land cover and land use change activities, such as reforestation and afforestation.