Sailesh Rao published a study on the “Lifestyle Carbon Dividend.”  I corresponded with Sailesh about this and have posted the interchange below. I have also posted some of the relevant parts of his poster when my questions related to them. This interview may be a bit technical for some of my readers, but I learned something from this exchange myself and hope that it is helpful. Key quote: ” On average, native forests sequester more than ten times as much carbon per unit area [compared to grasslands or pasture lands].” 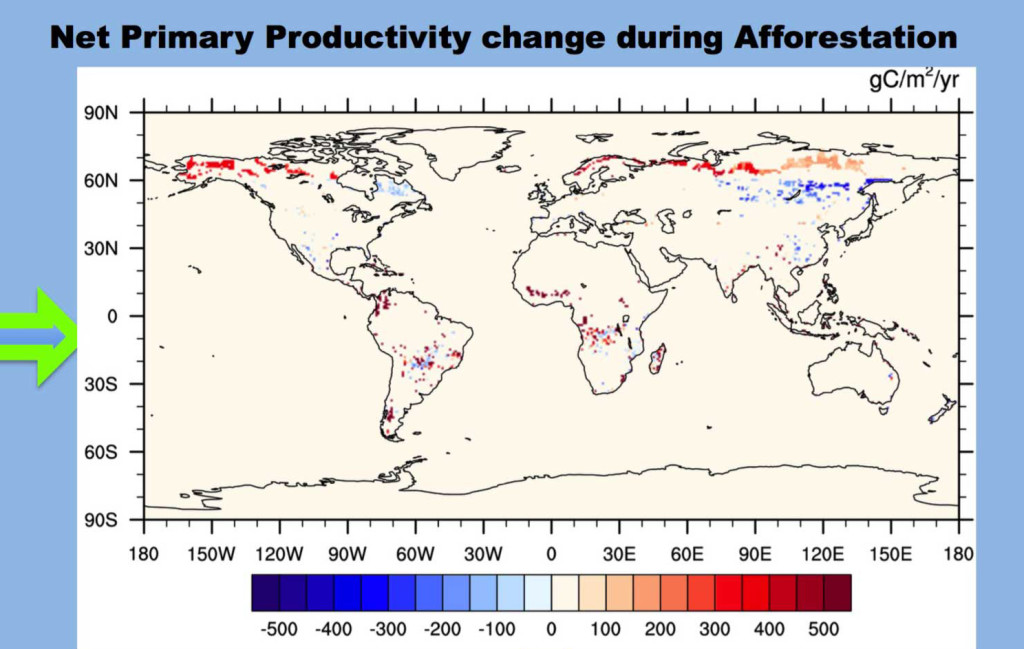 Question: In your poster, on the right hand side there is a chart of “NPP change due to afforestation” (pictured above), reflecting changes in afforestation due to adoption of a plant-based diet. In this chart, “NPP” is “net primary production,” that is, mostly plants, which are the “primary producers” of organic matter. Red is good in this context, and blue is bad. Red indicates an increase in NPP and thus in plant matter, and blue indicates a decrease.

I’m slightly surprised that there are no red areas in the U. S. I thought that the U. S. was being overrun with cattle and that if we gave up livestock agriculture, at least some of these grazing areas would revert to forest. Why doesn’t your model predict this?

Sailesh: The HYDE land use data for 1800 classifies a lot of areas including most of the US and India as “Mixed/Others”. When such grid areas are shown as grasslands or pasture lands in 2014, we didn’t revert them back to their native vegetation since it is unclear what those “Mixed/Others” were in 1800. Also, where grasslands got converted to pasture lands (pasture lands utilize chemical fertilization and irrigation), we didn’t revert them back to grasslands, i.e., prairies. This is why there was no prominent NPP change in the US, India, etc.

Question: There’s another thing I don’t understand about this chart. Not only are there no red areas in the U. S. and India, but there are many red areas in Alaska, northern Canada, and northern Siberia. Why does “going vegan” result in these areas increasing in NPP by going back to forest? My impression is that these aren’t heavy grazing areas. Does the fact there are red areas in e. g. northern Alaska mean that these areas have been grazed at some time since 1800? That’s what it sounds like, I’m just making sure I understand.

Sailesh: Yes, there are forested grids from 1800 that got turned into grasslands in this area.

Question: Here’s a third question. I also notice there are some blue areas, indicating an actual decrease in CO2 sequestration after a vegan change, e. g. in the U. S., Mexico, and central Siberia. Why is this? Why would any area of the world be less forested or experience a decline in NPP production after a worldwide switch to a vegan diet?

Sailesh: The model predicts that in the absence of chemical fertilization and irrigation, some areas will experience slower NPP as the native forests take hold. This is usually because of Nitrogen deficiency in the area. But since that NPP is not consumed by livestock, the carbon will accumulate over time and reach a steady state value corresponding to the sequestration for that forest type in that region.

Question: So in this case the blue areas would have decreased NPP due to the fact that these areas weren’t being aggressively fertilized and irrigated. But because the livestock weren’t gobbling up the NPP that was still there, it would still have a net positive effect on carbon sequestration, right?

Question: Here’s something else I don’t understand. If your estimate that “worldwide veganism” would result in 265 Gt C being sequestered is correct, then it would seem to follow that at some time since 1800, these forests must have been cut. But when they were initially cut back, we should have added 265 Gt C to the atmosphere, not to mention all the uncounted gigatons of carbon from the fossil fuels we’ve burned. Yet there is only 240 Gt C that have been added since 1750. Shouldn’t the actual carbon in the atmosphere be much higher than it actually is?

Sailesh: When forests were initially cut, they added much less than 265GtC to the atmosphere since the CO2 level in the atmosphere at that time was much lower than 400ppm.

240 GtC has been added to the atmosphere since 1750 as shown in the IPCC Carbon Cycle block diagram. However that is only 45% of the total anthropogenic emissions since 1750, since 55% of our emissions has been absorbed by the ocean and land. Since CO2 levels in the atmosphere have been increasing from 280 ppm in 1750 to a present value of 400 ppm, we can sequester more carbon on land today than what used to exist in 1750, due to the CO2 fertilization effect. (The “CO2 fertilization effect” is the increased plant productivity in response to higher CO2 levels in the atmosphere.)

According to ISAM, all the grasslands and pasturelands on earth, put together, comprise 47 MKm2 of land and sequester just 53 GtC today. That works out to a little over 1.1 KgC/m2. On average, native forests sequester more than ten times as much carbon per unit area.

Question: What is the time frame in which the afforestation depicted in the chart “NPP change during afforestation” would take place? Twenty years, thirty years, a hundred years? I vaguely recall that it can sometimes take a long time for a forest to reach a “climax” state.

Sailesh: NPP is an annual “rate” measure and therefore, NPP change would happen right away. The net carbon sequestration would take time depending on the forest type, but the rate of sequestration is typically highest at the start. Therefore, we can expect high rates of sequestration initially with it gradually tapering off over time. To assess the net carbon sequestration, we simply counted the carbon sequestered at maturity in a forest of the same type instead of running the model simulations over decades, which would have required expensive super-computer time. Therefore, we don’t have the transient response of the Lifestyle Carbon Dividend, but we can easily generate it if we can get some funding to the University of Illinois for that purpose.

Question: This leads to the further question of whether carbon sequestration just stops when the forest reaches a climax state?

Sailesh: There will be minor perturbations year to year but in essence, yes, provided the atmospheric concentration of CO2 remains constant.

Question: I’m also trying to figure out how to integrate your study into Goodland and Anhang’s “Livestock and Climate Change” 2009 paper in WorldWatch. They very conservatively estimate that “uncounted land use” devoted to livestock adds 2.67 Gt of CO2 equivalents each year (4.2% of the total of annual GHG emissions), in their table on p. 11. You give a figure of 265 Gt C that could be sequestered in total, which when combined with oxygen to form carbon dioxide, would result in about 971 Gt CO2. That’s over 300 times as much as the 2.67 Gt of CO2 equivalents each year contributed by “uncounted land use” as estimated by Goodland and Anhang!

This discrepancy seems to be at least partially due to the fact that this 971 Gt CO2 is not going to disappear all at once. It might take 100 years for the land to fully revert to forest and for this carbon to be fully sequestered. Then we would only be talking about 9.71 Gt CO2 annually instead of 971 Gt CO2.

Sailesh: That sounds about right, but there are so many factors that are “off the books” in the IPCC’s GHG accounting that it is difficult to assert that the human GHG contribution is only 71 Gt CO2-equivalents. In the IPCC Carbon cycle block diagram, all RED arrows are anthropogenic changes with some going one way (e.g. 11.6 Gt C emissions for livestock breathing, biomass decay and human induced fires ) while others go the other way ( e.g. 14.1 Gt C sequestration through NPK fertilizers and irrigation ). We have to address the anthropogenic interference to the Earth’s nitrogen cycle, phosphorous cycle and the water cycle as well as the carbon cycle in order to reach a sustainable steady state civilization. We have to reconcile all such “off the books” accounting even if it is politically unpopular or personally uncomfortable. As Richard Feynman said, “Reality must take precedence over public relations since Nature cannot be fooled”.

2 thoughts on ““The Lifestyle Carbon Dividend” — questions and answers”