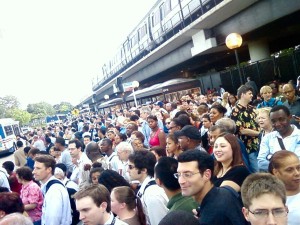 Sometimes I hear vegans, in the context of discussions of world hunger, say things like, “on a vegetarian or vegan diet, the world could easily support 10 or 15 billion people.” Actually, I myself have said things like this, so I’m not exactly pointing a finger here. “On a vegetarian diet, the world could undoubtedly support a population several times its present size” (A Vegetarian Sourcebook, p. 137).

Could we, really, support fifteen billion human beings on a vegan diet?

Knowing what I do now about extinctions and habitat destruction, I have to cringe at such statements. The problem is not that the statement isn’t true; the world probably could support 10 or 15 billion people on a vegan diet, by growing crops for people instead of crops for livestock. About half of the world’s cropland is now used to support livestock agriculture, so by devoting all of that land to grow crops for people, we could roughly double the amount of plant food. Ergo, we could roughly double the number of people in the world, which would bring the human population roughly up to 15 billion.

While this argument is basically, approximately valid, it has some problems. To begin with, it’s not clear for how long we could support these 15 billion. We are eroding soil at a prodigious rate, on average about 10 to 20 times faster that the natural rate of soil formation. Further, our high-output agriculture depends heavily on fossil fuels, which are rapidly depleting, and water, which is heavily limited and, in the case of groundwater mining, actually depleting. Also, if these 15 billion vegans are being fed, we may soon have 16 or 17 billion, and how much higher do we really want to go? But at least for a while, if everyone ate a vegan diet, we could certainly support many billions more than the current 7.4 billion, probably on the order of 10 to 15 billion human beings. 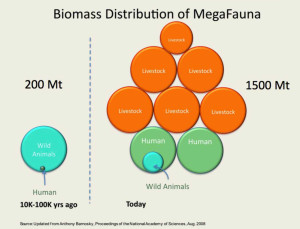 The real problem with the idea of 15 billion vegans is the assumption that if we don’t try to use land to create food for humans, even vegan humans, that somehow this land is being “wasted.” Do we have to totally dominate every last square inch of the planet before we will be content? Humans are already occupying and cultivating most of the biologically productive areas of the world in order to grow food. The overwhelming preponderance of large animals on this planet (in terms of biomass) is humans, their livestock, and their pets.

In some ways, if we could feed 15 billion humans, this would be worse than the status quo even if they were all vegan. Unlike livestock, these humans are probably going to want other things, like decent jobs, education, and perhaps flat-screen TVs. Where are we going to get the resources to support all of this? We’ve already got about 3 billion people living on less than $2.50 a day. Even if we eliminated the most egregious inequalities in the world economic structure (which would require several revolutions right there), do we have the natural resources to support these people?

I don’t think so. If the world adopts a vegan diet overnight, what we should do is immediately turn all the land appropriated for livestock agriculture back to Mother Nature. Let the croplands and especially the grazing lands go to the wild animals. That will help alleviate the extinction crisis because the leading cause of mass extinctions of wild animals is habitat destruction. And what is destroying habitat? It’s livestock agriculture.

Turning all this land back to nature would also help deal with climate change. A considerable amount of the “idled” land would revert to forests, which would suck carbon dioxide out of the air. In fact, as Sailesh Rao points out, the amount of carbon we could sequester would be approximately equal to the amount we’ve put into the atmosphere since 1800.

In the meantime, we don’t have the resources, over the long haul, to sustain the current human population of 7.4 billion, even on a vegan diet. We should be thinking about nonviolently reducing the human population, not increasing it. If we keep burning coal, driving cars, and overpopulating the planet, going vegan will only slow down the destruction, not stop it. The environmental crisis requires veganism, but it requires other things as well, such as reducing population and reducing consumption.