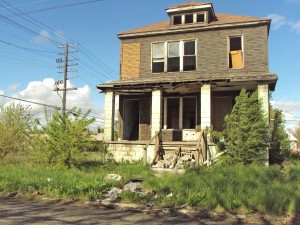 An abandoned house in Detroit.

Simple living should be a simple idea, but it’s not. The basic idea of living on less is an old idea, practiced by such people as the Buddha, Jesus, Epicurus, the Quakers, Thoreau, and Gandhi. Given the environmental crises that we now face, and given huge income inequality, simple living would also seem to be a timely idea.

Here are a few cases in point I’ll briefly discuss: (a) reducing our consumption to a level the entire world could afford, (b) riding a bicycle or taking the bus, and (c) veganism.

Reducing consumption. Could we, in the United States, all live on the global average income? Or better, on the global median income? Let’s see how that would work. According to the Gallup company, “the median per-capita household income [worldwide] is $2,920.” The median income is defined as that income where half the people earn more, and half earn less. If it’s any comfort, the average per-capita world income — total world income divided by total number of people — is somewhat higher; it was $7,000 in 2007 and is probably higher now. The average income is higher than the median income because of inequality. Just a few super-rich people bring the “average” up without affecting the typical incomes in the middle.

Could you live on an annual income of $2,920 a year? Just for reference, the poverty level for a single-person household in the United States is $11,770, so this would put you way below the poverty level. An income of $7,000 would almost bring you up to the U. S. poverty line and might be doable in, say, Detroit. It would be possible, perhaps, if everyone in the United States agreed to live this way, and we changed our entire infrastructure and way of life. For just one person to do it, well, it would be complicated. But however you figure it, it’s sobering to realize that even the rather minimal income of $7,000, multiplied by the billions of people on the planet, seems unsustainable for environmental reasons. That’s what we have now, and we have climate change, mass extinctions, oil depletion, deforestation, soil erosion, and all the other assorted environmental disasters. 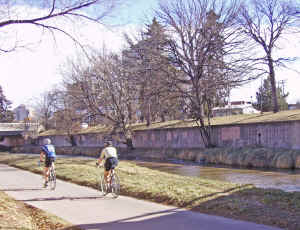 Living without a car. Here’s something easier: living without a car. The bicycle is the most energy-efficient form of human transportation. James Kunstler has made a good case that cars have wreaked havoc on American society (The Geography of Nowhere). There are people who advocate car-free living, such as Kathryn Alvord (Divorce Your Car) and Chris Balish (How to Live Well Without Owning a Car).

However, our society is not bicycle-friendly. The bicycle won’t work well if the distances are very far, and the way that American cities are set up, many desirable destinations will be far away. Riding a bicycle can be dangerous; an accident that would be no more than a fender-bender for an auto driver, can be fatal for a cyclist. Riding a bicycle can be problematic in bad weather; and without special equipment bicycles cannot carry heavy loads. There are ways to minimize or get around all of these obstacles, but you have to seek them out: it’s complicated.

Buses travel farther than bicycles, are safer, and protect you from the weather. But taking the bus will typically take longer than driving a car, and at present gas prices, may be more expensive as well. You’ll have to know the bus schedule, plan your trip when the bus is actually running, wait for the bus, walk to your destination from the bus stop, pay a fare that exceeds the price of the gas and routine maintenance, and get there later than you would have if you’d just driven a car.

Ditching your car altogether can be fraught with problems, and in less populated areas, won’t work at all. Even in urban areas, living without access to a car can easily isolate you socially. You can do it, but it’s complicated.

Yet, oddly enough, going vegan doesn’t decrease your expenditures by all that much. Some modern “simple living” advocates continue to eat meat and don’t see a particular problem with it. My guess is that this is related to the fact that meat-eating just isn’t that expensive. And aren’t we omnivores by nature? Sure, meat can cause health problems if you go overboard, but health insurance for the fat, diabetic meat-eater is no more expensive than health insurance for the vegan.

Isn’t this odd? Shouldn’t something which is so destructive of the environment cost a lot of money? Well, it doesn’t. “Simple living,” in the sense of “reducing your costs,” doesn’t always align that closely with “treading lightly on the earth.” This clearly applies to meat-eating, but it applies to such activities as driving a car or heating your house as well. Is simple living about reducing costs, or about reducing environmental impact? This is a key point that Kate Lawrence makes in The Practical Peacemaker: true simple living means not consuming any more of the earth’s resources than we need to.

There’s no one around to present you a bill, at the end of the month, for all the environmental damage you’ve done through your purchases. Who pays for soil erosion, groundwater depletion, or deforestation? Or, for that matter, who pays for dumping carbon dioxide or methane waste products into the atmosphere? No one, because these are natural resources just there for the taking. The environmental damage is real, but the consumer never sees it.

In a society dedicated to economic growth, it is easy to consume and hard to live with less. Simple living isn’t something a single individual can easily do. In fact, it may not be something that can be done at all, until we voluntarily reduce our bloated human population. Simple living is a project for our whole society.

9 thoughts on “Why is simple living so complex? (Part 1)”